Gambling companies have had a fantastic year in the stock market. Shares of leading brands such as Wynn Resorts (NASDAQ:WYNN) and Las Vegas Sands (NYSE:LVS) have spiked by 42% and 48%, respectively, during 2013 (year-to-date). Even shares of Caesars Entertainment (NASDAQ:CZR) have recovered and jumped by more than 146% during the year. Are these companies making a comeback on account of the recovery of Las Vegas? How big of a role are these companies' Asian projects (mainly in Macau) playing in their growth? Let's examine these companies' strengths and weaknesses to see how Las Vegas is playing out for these companies.

Revenues and profitability are rising
Las Vegas is slowly recovering as indicated in the latest earnings reports of major casinos: Wynn's net sales in its Las Vegas operations slightly rose by 1.1%. Despite the recent rise in sales, Vegas' share of total revenues continues to dwindle and is currently at 28%. Most of the company's growth continues to come from its Macau business. In terms of profitability, Wynn's operating profit in Las Vegas' operations also rose to 7.4%. Macau's profitability remains higher at 25%, however.

Both companies have had a great quarter. While their Vegas properties have done well and improved in terms of revenues and profit margins, though, they are still taking the back seat for these companies' Macau properties.

Conversely, Caesars Entertainment's  revenues fell by 0.8%. Most of the drop is related to the company's Atlantic City operations. During the quarter, revenues tumbled by more than 11%. The company's revenues in Las Vegas rose by 5.2%. After controlling for impairment and goodwill provisions, the company's operating profitability rose due largely to higher profit margins in Las Vegas. Moreover, Las Vegas is still the main revenue generator with more than 35% of Caesars' revenues. Looking forward, the company plans to expand its operations in Vegas by constructing the LINQ and QUAD properties and transforming the Bill's Gamblin' Hall into Gansevoort Las Vegas.

The company continues to find ways to finance its capital expenditure by making public offering of shares , raising debt, and selling assets. Caesars Entertainment has recently reduced its operations in Macau and has sold its Golf course for $420 million in cash. Even though Caesars has improved its situation in Vegas in terms of revenues and profitability, its situation is still dire.

The chart below shows the profit margin of all three companies in the past quarters. 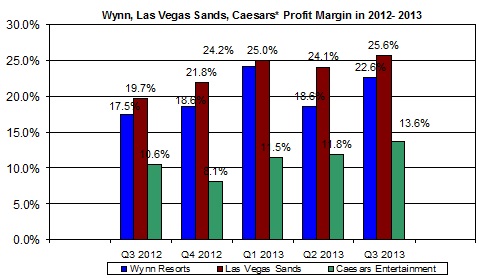 Las Vegas Sands also announced that it will increase its dividend payment in 2014 by 43%. These factors are likely to drive more investors toward these companies' stocks. Not all is well, however. The main problem that Wynn and Caesars Entertainment continue to face is high debts and deficit in equity.

Debt remains high
In past quarter, most of these companies increased their debt to finance capital expenditures. Wynn Resorts' total debt grew by 4% during the third quarter year-over-year, while Caesars Entertainment's debt grew by nearly 2.8%. Moreover, both these companies have debt in equity. Las Vegas Sands hasn't increased its debt, but its debt-to-equity ratio rose to 1.26 in the third quarter of 2013. Nonetheless, the company's financial situation is better than that of Wynn and Caesars.

Considering the future growth of these companies, their high debt, and even higher profit margins, let's examine the current valuation of all three companies compared to their industry average.

Valuation
The sharp rise in these companies' stocks in the past year has also reflected in their high valuations. These valuations are relatively high compared to the industry average, as presented in the table below.

The table compares the enterprise value-to-EBITDA ratio of Wynn, Las Vegas Sands, and Caesars Entertainment to the hotel and gaming industry in general. As you can see, all three companies have a higher ratio than the industry average. At face value, these findings suggest that these companies' current valuations are relatively high.

Is Las Vegas recovering?
These companies have done better in recent quarters and improved their standings. Part of the recovery is related to Las Vegas, but the future growth continues to be in Macau. Las Vegas has a long way to go before it will return to its glory days, if it can return at all. Because of this, relying on this city's growth might not be the right move. Of the three companies, Las Vegas Sands seems the most like an investment worth considering. It leads the others in terms of a higher potential growth in Macau, smaller exposure to Las Vegas, and high dividend payment.

Is It Time to Get Back to Las Vegas? @themotleyfool #stocks $WYNN $LVS $CZR Next Article
Current