But few of us can invest in every single dividend-paying stock on the market, and even if we could, we're likely to find better gains by being selective. Today, two of America's largest retailers, Home Depot (NYSE:HD) and Target (NYSE:TGT) will square off in a head-to-head battle to determine which offers a better dividend for your portfolio.

Established in 1978, Home Depot(NYSE:HD) is the largest home-improvement specialty retailer in the world. The company is also one of only two retailers on the Dow Jones industrial Average, reflecting its importance to the American economy. Home Depot operates more than 2,200 retail stores in the United States, Canada and Mexico catering to both do-it-yourself (DIY) and do-it-for-me (DIFM) styles. Home Depot has been one of the fastest-growing retailers, and also one of the best stocks, since its first store opened in 1979.

Founded in 1902, Target(NYSE:TGT) (formerly Dayton Hudson) is the second-largest retailer in the United States, behind only Wal-Mart. The company is ranked among the top 40 Fortune 500 companies by sales. From its headquarters in Minneapolis, Minnesota, the company has been expanding into Canada since 2011, and now operates about 270 Zellers stores through its subsidiary, Target Canada. It also has plans to open 100 to 150 new stores between 2013 and 2014, to add to its nearly 2,000 locations already open in North America today.

Round one: endurance (dividend-paying streak)
According to Dividata, Home Depot's paid regular quarterly dividends for more than 20 years since initiating payment in 1992. However, Home Depot's 22-year dividend streak can't hold a candle to Target, whose dividend history dates all the way back to 1967. Target's uninterrupted quarterly dividend-streak of 46 years allows it to win the endurance crown without breaking a sweat. 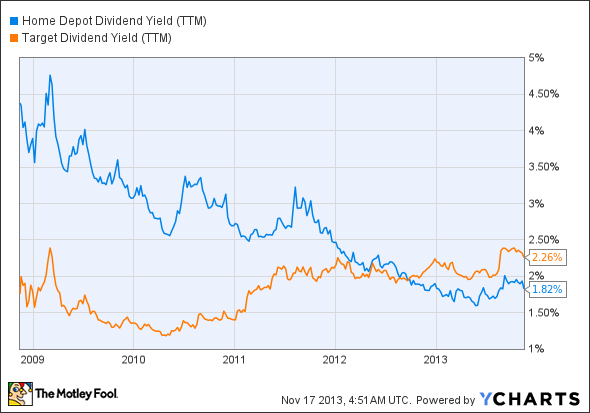 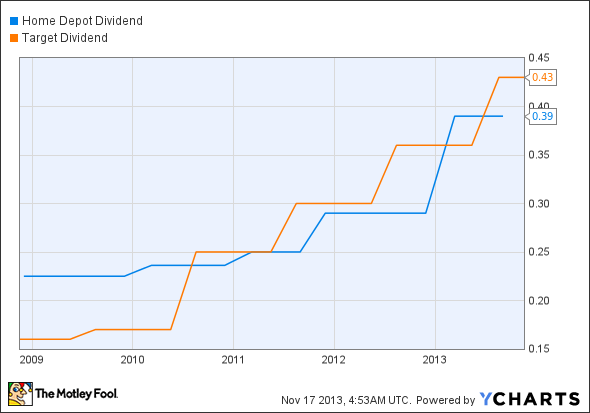 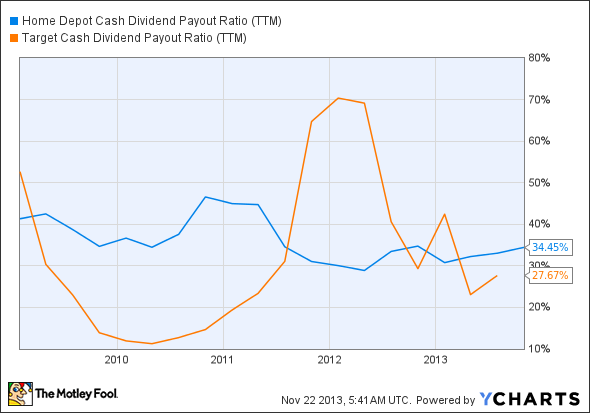 Bonus round: opportunities and threats
Target may have dominated the best-of-five on the basis of its dividend history, but investors should never base their decisions on past performance alone. Tomorrow might bring a far different business environment, so it's important to also examine each company's potential, whether it happens to be nearly boundless or constrained too tightly for growth.

One dividend to rule them all
In this writer's humble opinion, it seems that Home Depot has a better shot at long-term outperformance, as the U.S. housing market has barely begun to recover from a once-in-a-lifetime crash. Increasing consumer home-improvement spending and strong housing starts have already fueled a double in Home Depot's shares over the past two years. On the other hand, Target has been expanding its geographical presence as well as product offerings, but it's been crimped by an ongoing retail malaise, and a long-running shift toward online retail has barely begun to impact larger brick-and-mortar retailers. You might disagree, and if so, you're encouraged to share your viewpoint in the comments below. No dividend is completely perfect, but some are bound to produce better results than others. Keep your eyes open -- you never know where you might find the next great dividend stock!