It doesn't happen very often, but a whole new market is opening up if the Federal Communications Commission has its way. Air travelers may soon be able to make phone calls and use cellular data while flying on commercial airlines.

While some flight attendants and passengers may not like it, some companies will. Their investors might want to dial in too.

Sonic boon?
Wireless carriers such as AT&T (NYSE:T) and Verizon (NYSE:VZ) have had to be creative over the past several years in order to grow their businesses. The companies have been buying spectrum, buying each other, and offering new services.

Now, a new and potentially lucrative market, seven miles up, is opening thanks to the FCC. The boon to providers won't exactly be known. How many travelers will actually use devices up there? What will the infrastructure costs be?

Eventually, it is likely to be helpful to carriers. Air travel is expected to grow at an annual rate of 5% over the next two decades. Calls from 35,000 feet will probably be on the order of $3 to $4 per minute. A typical business call lasting one hour could cost around $200. Some of that money will eventually find its way to the carriers.

With the proliferation of smartphone and tablet use -- two brand new markets created in the recent past -- revenue at both AT&T and Verizon has been trending higher, although at a relatively slow pace. 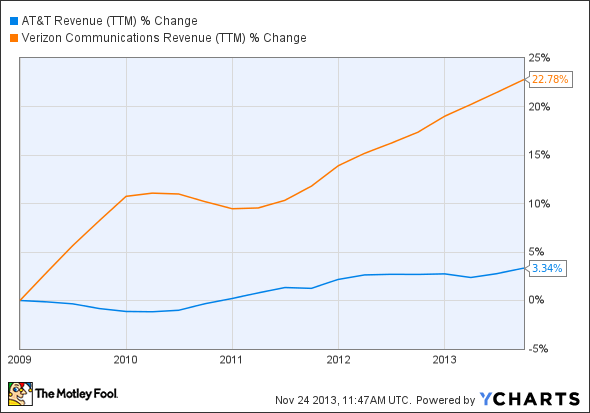 Merger mania
The boost from wireless use in the air will complement what is happening on the ground. The big players have been jockeying for position. Verizon wanted all the profits for itself and bought the 45% portion of Verizon Wireless that was owned by Vodafone (NASDAQ:VOD). The $130 billion deal should close early in 2014 and provide a boost to Vodafone and investors.

Vodafone will use some of the proceeds to upgrade its European infrastructure so it can distance itself from competition. However, most of the funds will be returned to shareholders.

Shareholders could get another gift next year -- rumors abound that AT&T, in a bid to expand internationally, would like to buy the European operations of Vodafone in a mega deal worth around $175 billion, dwarfing the $130 billion Verizon-Vodafone transaction.

Verizon will have to deal with the enormous debt it took on after buying out Vodafone. The company issued $50 billion in new bonds to help pay for the majority of the cash portion of the deal. Whether the debt strangles Verizon growth going forward remains to be seen. So far, Wall Street seems alright with it. Verizon shares have risen about 8% since the buyout was announced.

Foolish conclusion
It is likely that air passengers will soon be able to talk and text at 35,000 feet using their AT&T and Verizon plans. This will open up a new market for the big carriers to complement the growth achieved through mergers and acquisitions.

I'm looking for the next big market for wireless. Under the sea? In outer space?