In October, I pitted CVS (NYSE:CVS) against the biggest pharmacy retailers in Better Buy: Walgreen, CVS, or Rite Aid? CVS came out on top in that debate, but CVS is much more than a big pharmacy retail chain.

It also operates Caremark, a drug wholesaler that's one of the nation's biggest pharmacy benefit managers, or PBM's.  CVS acquired Caremark in 2006 to broaden its reach into institutional customers like employee sponsored health care plans and hospitals.  That put it into direct competition with other PBM's including  Express Scripts (NASDAQ:ESRX) and Catamaran (NASDAQ: CTRX), raising the question of whether one of these PBM's is a better buy than the other?

Pharmacy benefit managers administer prescription drug plans offered by employers, unions, and others. These PBMs handle drug benefits for 215 million people -- a market worth $233 billion in sales, according to research firm IBISWorld. That means PBM's like CVS, Express Scripts and Catamaran serve as an important bridge between drug manufacturers and consumers.

That bridge is about to get a lot busier as aging boomers and insurance expansion deliver compounded annual drug spending growth of 6.6% from 2015 through 2020, according to the Centers for Medicare and Medicaid Services, or CMS.

Operating excellence is critical for low-growth PBMs
The PBM industry in the United States is mature and that means fewer opportunities for CVS, Express Scripts, and Catamaran to boost sales.  As a result, profits are driven by each company's ability to manage logistics, payroll and administration costs, rather than by growing sales organically.

Thus, comparing operating margin, which shows how much profit is left after paying for costs like shipping and wages, can show us which company is more likely to benefit from any uptick in demand tied to rising employment and the Affordable Care Act, or ACA.

While all three companies get good grades for improving margin this year, CVS is clearly the leader, with a margin twice as high as Catamaran's.  That advantage likely owes to leveraging CVS's retail footprint across Caremark's plan sponsors, giving the company pricing power and opportunities to reduce overlapping costs.  That's allowed CVS to withstand falling wholesale drug prices and PBM demands on retailers to accept lower reimbursements. It also positions CVS to benefit most from ACA driven demand. 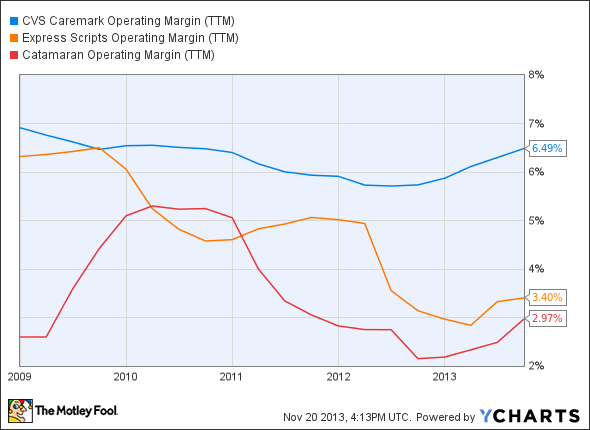 But while CVS has better overall operating margin, Express Scripts and Catamaran have made important acquisitions that have helped their margin improve this year, too.  Express Scripts' $29 billion acquisition of Medco Health gave it a 40% share of the PBM market, allowing it to better negotiate reimbursement deals with independent pharmacies.   Similarly, Catamaran's acquisition of Catalyst improved its negotiating position, turning the company into the fourth largest PBM, with a market share of 4%.

The increasing margin tied to acquisitions has helped all three companies over deliver on earnings per share.  CVS has beat analyst earnings estimates in four of the past four quarters, and Express Scripts has only trailed once.  Catamaran has been the biggest surprise, outpacing analyst estimates by an average 7.8% over the last four quarters as analysts have failed to adequately model cost savings associated with its Catalyst acquisition.

The ability of these three companies to produce earnings may not be fully appreciated by Wall Street given analyst estimates for next year remain arguably timid. Analysts have only slightly increased next year's outlook for Catamaran and CVS, and they've left Express Scripts earnings outlook unchanged.

With low- to mid-single-digit operating margins, it shouldn't be surprising that all three of these companies have price-to-sales ratios of less than 1.  But while shareholders of Express Scripts and Catamaran are paying less than peak valuation for each dollar of sales, investors are paying the most in five years for CVS's sales, on hopes that the company's expansion of its MinuteClinic health clinics will capture more post-reform patient prescriptions.  Those expectations also have investors paying new highs for CVS earnings.

Express Scripts also stands to benefit from rising demand tied to the ACA because of its sheer size. So, investors are paying more for each dollar of earnings at there, too.   However, that's not the case for Catamaran.  The company's P/E soared following its merger announcement with Catalyst in April 2012 on hopes it would be able to better compete against Express Scripts and CVS.  But with the deal done and results coming in, its P/E appears to be moving in line with its industry peers. 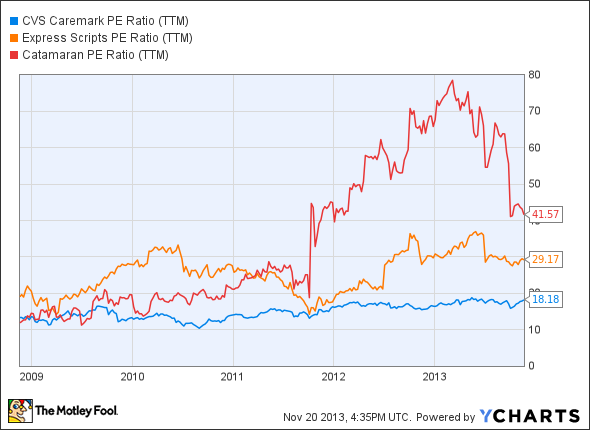 Finally, if we look at how much investors are paying for future growth, CVS has a PEG ratio of 1.14. Express Scripts and Catamaran have PEG ratios of 0.99 and 0.91, respectively.  Since PEG ratios below 1 are typically considered a good value, all three seem intriguing -- particularly when you consider rising employment and greater demand tied to Medicaid expansion and insurance exchanges.

Foolish final thoughts
CVS offers investors the best operating margins and a solid history of earnings beats, but the company appears to be pricing in some of the potential opportunity for growth tied to the ACA given both price to sales and price to earnings are at five year highs.

Catamaran's strong earnings showing is also interesting.  However, it remains more expensive than the other two.

Overall, Express Scripts may offer the best balance of the three in terms of earnings and valuation.  But that doesn't mean you should ignore CVS and Catamaran. Drug spending growth tied to reform may benefit all three over the coming years.