It seems like a short time ago when the snow was melting and sequestration was about to crush the economy; but 2013 has turned out to be a great year for investors. The Dow Jones Industrial Average (DJINDICES:^DJI) is up 26.1% when you include dividends, and there doesn't seem to be anything stopping the bull run right now.

As investors, it's always important to learn from past performance, and 2013 is no different. Here's what I've learned about the stock market this year.

Stocks can go up... for no reason
The stock market is a strange and fickle place. Sometimes, companies do well and their stocks go down, and sometimes, stocks go up for no reason at all. The latter seemed to be prevalent in 2013.

Fellow Fool Dan Dzombak recently pointed out that nearly all of the market gains seen in 2013 were from multiple expansion, not improved earnings. So, companies aren't doing better this year; we're just paying more for them.

This is one of the phenomenons that make timing the market so difficult. When it seems obvious that stocks should be going down because earnings are weak, the opposite takes place. At The Motley Fool, we preach long-therm buy and hold investing, and the last five years show the value of that. This year, the urge to sell may have sprung up as profits mounted in your portfolio; but I learned it's best to hold steady. Another big day may be around the corner.

In energy, the transformation has been remarkable in just a short period time. If someone told you five years ago that you could install solar panels on your roof for free, and use that power to charge a high-performance electric vehicle, you would have thought that person was crazy. It's a reality for thousands today, however, and innovation has made both solar and electric vehicles economically viable long term.

Less than a decade ago, the concern about oil imports was hitting an all-time high and, today, the U.S. is close to becoming the largest oil producer in the world. Advancements in shale oil extraction have made this possible, and this year, drillers continued to get more oil with even fewer drilling rigs.

We've made huge advances in streaming content, as well. Netflix and Hulu have pushed hard into streaming media, but we are starting to see more direct content, as well. ESPN, the Disney Channel, PBS, Fox, and others now have their own streaming apps on Apple TV, Roku, and other devices. We're in the beginning of a new media world, and the last year has seen huge strides in bringing consumers and content closer together.

The housing market will be fickle
Housing was one of the main drivers of the most recent recession, and the housing recovery has been one of the biggest drivers of the recovery. Building homes brings jobs to the market, and rising home prices increase people's net worth. But interest rates can't get any lower and, as rates go up, the recovery will be very choppy.

In May, interest rates began to rise as investors predicted the Fed would soon begin slowing some of its monetary stimulus. When they rose, home sales quickly dropped. 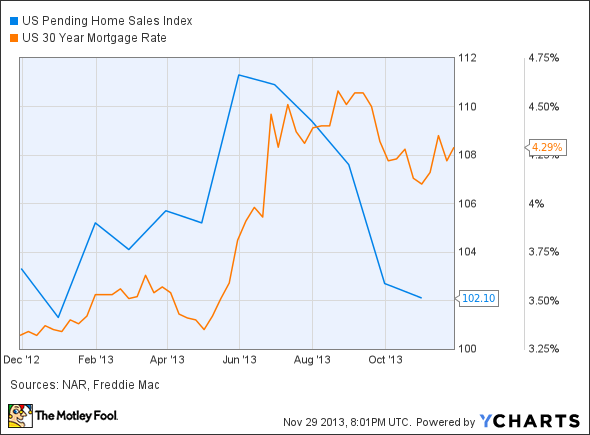 The Fed will probably begin tapering next year and, when it does, we could see home sales and even home values fall. This year, I learned that we may be in the middle of a housing recovery, but it won't be smooth, and consumers are heavily reliant on low-mortgage rates to afford homes.

Foolish bottom line
This year, I've learned that market can go up for almost no reason, innovation is alive and well, and that the housing recovery may be bumpy. Hopefully, these lessons will come in handy while investing in the future.