Please ensure Javascript is enabled for purposes of website accessibility
Log In Help Join The Motley Fool
Free Article Join Over 1 Million Premium Members And Get More In-Depth Stock Guidance and Research
By Michael Carter - Dec 3, 2013 at 11:59AM

Two-thirds of the U.S. adult population is considered overweight or obese. This trend has caused many clothing retailers to address the size ranges they provide. Abercrombie & Fitch recently announced plans to add new plus-sizes for women in 2014. In contrast, Urban Outfitters has ignored this issue while Gap has sold plus-sizes for years. Overall, Abercrombie & Fitch's new plus-size initiative will only add more problems for the controversial clothing retailer.

A recent poll showed that among the two-thirds of the U.S. adults that are considered overweight, a record 27.2% of them are obese. This trend, which has been getting worse for years, is something apparel retailers have been forced to address.

Abercrombie & Fitch (ANF -10.46%) recently announced a new plus-size initiative for women in 2014 while its competitor, Gap (GPS -9.84%), has had plus sizes for years. Likewise, Urban Outfitters (URBN -10.66%) still has a size problem to go along with its continuous string of public relation controversies. In the end, Abercrombie & Fitch adding plus sizes only adds more problems for the company and its shareholders.

Abercrombie & Fitch's new plus sizes may backfire
Unless you have been living under a rock, you should know that Abercrombie & Fitch has experienced bad PR for many years. Some of the company's issues have involved forcing employees to buy and wear Abercrombie clothing without reimbursement, the hiring practices of minorities, the mistreatment of customers, labor practices, controversial product themes and advertising, and more recently, the infamous 2011 push-up bra aimed at seven-year olds.

By Urizzato (Own work), via Wikimedia Commons

Now that the stock is down nearly 30% year-to-date, net sales fell 12% last quarter, and the competition has gradually taken away market share, the company has finally succumbed to adding plus sizes for women in 2014. While this sounds like a step forward, the details echo poorly executed company initiatives of the past.

First, the company stated that these plus sizes will only be available online. To some, this might suggest that overweight women either are too embarrassed to visit the actual stores or that Abercrombie & Fitch doesn't want to have overweight women in its stores.

In contrast, Gap for years has been offering plus sizes across its Old Navy, Gap, and Banana Republic brands with no issues. In fact, Gap is one of the few clothing retailers that carries up to size 16 in stores.

This decision has apparently paid off as third-quarter earnings for the retailer increased to $337 million, up from $308 million in the same quarter last year. Unlike Abercrombie & Fitch, Gap's net sales also rose 3%.

Adding plus sizes for only women may fire up both genders. Both men and women will want to know why only women get plus sizes. The majority of current men's tops at Abercrombie & Fitch are muscle fitted, and bottoms still range from classic straight to skinny and super skinny, leaving overweight guys with no options.

One of the big reasons for Abercrombie & Fitch's poor third-quarter earnings, which resulted in a net loss of $15.6 million compared to the $84 million profit in the year-ago quarter, is that inventory backed up, causing gross-margin erosion. This means that items were not selling and the company had to sell off inventory for little-to-no profit. This will occur again next year if the plus sizes don't sell due to a lack of demand, bad designs, or high costs. 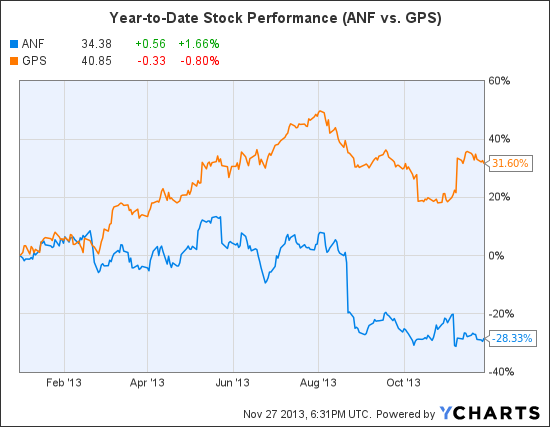 Urban Outfitters' success can only overshadow its controversies for so long
Similar to Abercrombie & Fitch, Urban Outfitters' product lines usually stop at size 12 for women. When the average American woman wears between size 14 and 16, the company is losing potential customers for the long term.

Urban also had a string of bad press related to numerous controversial products, ranging from racism to weight discrimination. Controversy even reached the military with the company's recent September military patch problem, which closely resembled the patches worn by actual soldiers.

Unlike Abercrombie & Fitch, Urban Outfitters has been able to overcome the past and present PR nightmares, and produce net income of $70 million in its most recent quarter. Net sales also increased by 12% to a record $774 million.

Gap uses controversy to its advantage
Unlike Abercrombie & Fitch and Urban Outfitters, Gap has used controversy to its own benefit. Most recently, an ad featuring a Sikh model went viral after it was vandalized with racist comments. Gap immediately used that same ad as the backdrop for its Twitter page.

This does two things for the company. First, it shows that Gap won't tolerate racism by the company or received toward the company. Second, this PR move could be the start of a holiday surge campaign as minorities move in to support the company on how it handled this situation.

Bottom line
Even though it looks like Abercrombie & Fitch is heading in the right direction by adding plus sizes, it appears more of a desperate attempt to win back the same customers it alienated for years. Given that it has suffered significant margin erosion in recent months resulting in a net loss this past quarter, taking a chance now at adding plus sizes could backfire if the demand doesn't support the additional inventory.

Urban Outfitters has a size issue also, but the company continues to grow despite frequent PR controversies. In the end, Gap is in the best position to succeed given its lack of PR nightmares, the way it deals with controversy, and the plus sizes the company already provides.