Have you noticed there are fewer and fewer Bank of America (NYSE:BAC) branches in your neighborhood? Well, its true. And the reason they are leaving is... you.

Bain, a consultancy, recently found in a survey of people across the globe, of the major banks in the United States, Bank of America's customers were the least likely to visit the bank's branches. Less than 60% of its customers had visited a branch for a routine transaction within the most recent quarter, which was significantly lower than the national average of more than 70%.

According to the most recent data from the FDIC, Bank of America had the highest number of deposits in the U.S., with almost $1.2 trillion at the end of the second quarter. This marked the 14th year in a row Bank of America held the top spot, as it bested peers Wells Fargo (NYSE:WFC) and JPMorgan Chase by $175 billion and $195 billion, respectively.

As you can see in the chart below, it holds a commanding position when compared to the other five largest banks.

Bank of America managed this even without holding the title of having the most branches. Its 5,401 branches at the end of the second quarter of this year placed it behind Wells Fargo (6,297 branches) and JPMorgan (5,697) for third on the list.

But as you can see in the chart below, when compared to the five banks mentioned above, Bank of America has been steadily decreasing its total branch count since 2009: 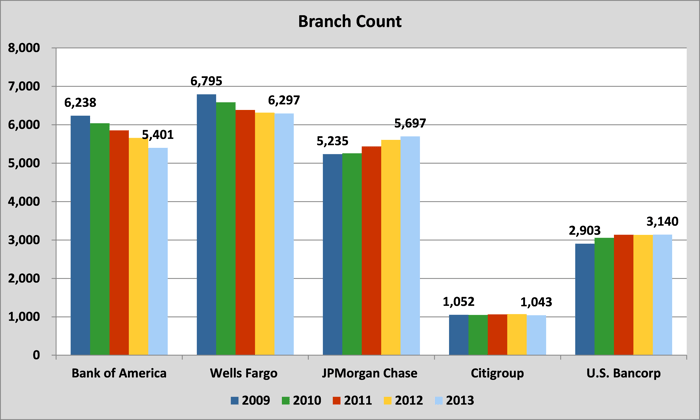 Interestingly, this reduction in branches hasn't resulted in the total level of deposits at Bank of America going down -- those have actually increased by $239 billion since 2009:

Of course, on a raw percentage basis, Bank of America hasn't been able to match that of its peers, but it has still maintained its approximate 12% share of total U.S. deposits.

The shift
One possible explanation for this is the rapid growth in Bank of America's mobile user base, which in the third quarter stood at almost 14 million, an increase of almost 26% over the same time last year. Bank of America has also aggressively pursued new ways to interact with its customers, including install new "express banking centers," with extended hours and video screens that allow customers to talk to a teller if they desire.

The previously mentioned Bain study noted, "customers have embraced banking on their smartphones and tablets when banks offer applications that are both useful and easy to navigate," and that "mobile tools have a strong, positive effect on customer advocacy."

One reason Bank of America is navigating away from the branch model seems to be because that's what its customers are doing, too.