Apple (NASDAQ:AAPL) is famous for more than simply developing great smartphones. The company also has an amazing balance sheet, with more than $147 billion in cash. This amount accounts for approximately 10% of all U.S. corporate cash.

Even though most of its cash is abroad (the company needs to pay taxes to bring the money back), from a pure balance sheet perspective, Apple wouldn't have a problem buying Twitter(NYSE:TWTR), worth $22.5 billion. However, unlike software-focused company Salesforce.com (NYSE:CRM), or tech giant Yahoo!, Apple is not particularly famous for being an active buyer of companies. That's why the company took many by surprise last week when it acquired Twitter analytics start-up Topsy Labs for more than $200 million, an unusual move for a hardware-oriented company. Why did Apple acquire Topsy Labs? Moreover, how can Apple's products benefit from Topsy's technology?

Although the purpose of Apple's latest acquisition has not been officially confirmed, most analysts agree that Topsy's technology can be successfully integrated into more than one Apple service, from the iTunes store to the Siri voice assistant. For example, according to Gartner analyst Carolina Milanesi, Topsy's technology can be used to improve users' experience of both iTunes and the app store because it could improve the automatic recommendations system.

Hayes Davis, CEO of Union Metrics, thinks real-time analytics can improve Siri's functionality. The new Siri would be better-informed about recent, relevant events. This does not directly contribute to Apple's top-line performance, but it will certainly help the company differentiate its product from Android devices. In this regard, Fool contributor Chris Neiger went as far as saying Apple just bought itself "a better Siri."

The real value of Topsy is that, as one of Twitter's few official partners, the company has direct access to Twitter's database of tweets. It has screened billions of tweets (several years worth), and has organized them into a searchable database. By analyzing these tweets, Topsy can measure the impact of a given song, promotion, or event. Marketers can then use this information to make better decisions, gradually optimizing the social impact of their promotions. 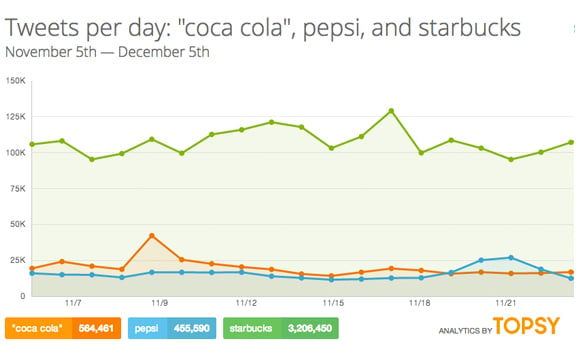 Notice that, according to the Wall Street Journal, Topsy's acquisition by Apple probably received Twitter's blessing, and should allow Apple to get access to rich data.

How analyzing tweets became a great business
Here, the big winner is probably the data analytics industry, because now even Apple -- the most important tech company in the world in terms of market cap -- has recognized the fundamental role of real-time social data analysis to make better business decisions.

Data analysis is set to become a major tech trend in 2014, and more acquisitions and initial offerings in this field may materialize. In particular, companies analyzing data from social networks in real time have an extra edge, as social networks are heavily used for recommending products and services, making it very attractive for marketers. According to a Forrester research paper, only 10% of consumers trust advertising, but as many as 70% trust recommendations from friends.

Salesforce.com, which spent more than $2 billion buying Twitter partners Radian6 and ExactTarget, is the leader in this field. The company, which provides a full social media marketing suite, also has access to the firehose of public tweets. Through its Radian6 service, Salesforce.com allows marketers to analyze conversations about their companies and competitors, measure buzz around their brands, and gain insight into what customers want.

With $1 billion in quarterly revenue, Salesforce.com still has plenty of growth potential. According to Morningstar, Salesforce.com has only sold to half of the Global 500 companies. As the leading customer relationship management software, the company also has the ability to cross-sell its social media analytics services, and is expected to benefit from an increase in overall demand for data analysis.

Final Foolish takeaway
Apple's acquisition of Topsy Labs confirms the fact the giant is very interested in using data analysis to improve its product offering. More importantly, this move can be interpreted as a signal that the demand for real-time social data analysis is gradually increasing, as companies continue using social networks for marketing.