A tragic anniversary, but less impetus for change, muddies the waters on industry growth

As the one-year anniversary to the tragic murder of 20 children at the Sandy Hook school in Newtown, Connecticut approaches this week, it's perhaps timely to examine if an investment in gunmakers Sturm, Ruger (RGR 2.72%) and Smith & Wesson Holdings (SWBI 14.49%) still makes sense.

The reelection of President Obama last year followed by the school shooting ratcheted the gun control debate up to deafening levels. There were calls for a national ban on assault weapons and the expansion of background checks for gun purchases, though most measures were defeated either as an infringement on constitutional rights or unnecessary until current gun laws were effectively enforced. While a recent Rasmussen survey found the country about evenly divided on whether new measures were needed (46% yes, 47% no), they came together in an overwhelming mass (73%) in saying stricter enforcement of existing laws were needed.

And since President Obama has been mired in federal budget debates and the slow rollout of his signature health care law, gun control measures have taken a backseat. Even the gun-buying public seems to sense this. Although the FBI reports it's still conducting record levels of background checks, the rate of growth is leveling off. As of the end of November, the FBI had conducted 19.05 million checks this year, just below the 19.59 it had checked for all of 2012. Beginning in June, however, five of the succeeding six months had fewer checks than the year ago period. 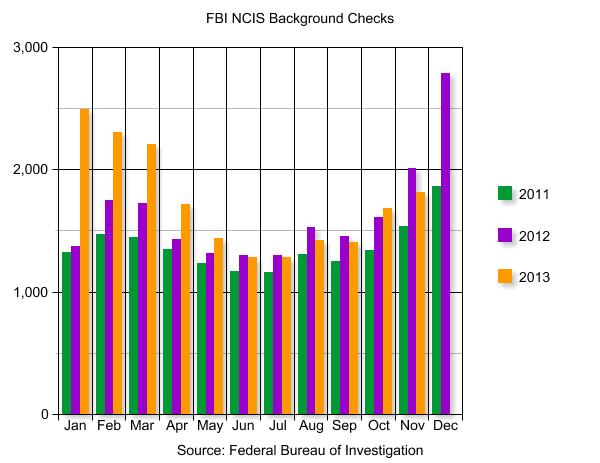 And with that slackening pace comes slackening sales. In its third quarter earnings report, sporting goods store Cabela's (CAB) reported that starting in August gun sales slowed significantly and ammunition sales dropped as well, even though they remain elevated above year ago levels. Similarly, Dick's Sporting Goods (DKS 8.40%) is also facing headwinds in firearms and ammunition sales, and though a portion of that is because of the exceptionally strong quarter it had last year as the presidential election loomed, it says the category is overall slowing.

Ruger still had a strong backlog of business for its guns when it reported earnings last month, noting that demand still outstripped the NCIS background checks with a 31% increase in sales from distributors to retailers, and its ending order backlog of 1.9 million units was more than double last year's backlog of 0.9 million units at quarter's end.

For its part Smith & Wesson stopped reporting backlog other than on an annual basis, and it doesn't compare its business to background checks other than to give long-term estimates, but it sees it still growing about 9% to 10% annually, just as it has for the past decade. As for sales, it also enjoyed a robust 34% increase (excluding Walther sales, which it ended in April), so business still looks strong. Also, privately-held Freedom Group, the maker of Remington and Bushmaster rifles, reported that sales were up 51% year to date, but its private equity owner Cerberus Capital Management still hasn't been able to unload the gunmaker despite its announced intention to do so after Sandy Hook.

So does all this portend a slowdown? I don't think so, at least not yet. For example, while there may not be the same shortage of ammunition there once was, Dick's for one is still limiting the amount customers may purchase at any one time, and tough new EPA regulations are forcing the closure of the sole remaining lead smelter in the U.S., meaning all ammunition sold to civilians will have to be imported. Coupled with subsequent mass shootings, such as the one at the Washington Navy Yard, the potential for new gun control legislation is being kept alive.

It would appear that while Ruger and Smith & Wesson have gained 65% and 45%, respectively, this year, they both still have more room to run. Seems to me these gunslingers still have record sales in their sights.

$3,000 Invested in These 3 Stocks Could Help Make You a Fortune Over the Next 10 Years