Data on Geron's (NASDAQ:GERN) imetelstat presented at American Society of Hematology, or ASH, meeting Monday after the bell show that the drug is capable of sending some myelofibrosis patients into complete remission, something that Incyte's (NASDAQ:INCY) Jakafi -- the only drug approved to treat myelofibrosis -- doesn't do.

And yet shares fell 6.7% Tuesday. What gives?

One graph says it all: 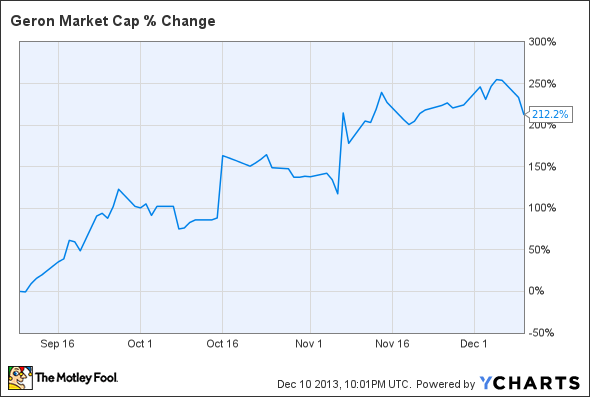 Do you see that? No, I'm not talking about how the company's value has tripled in three months (although that is certainly a contributor).

Look at all those spikes up and down. This is one volatile stock. Should it be all that surprising that investors sold the news? Even with the drop this month, Geron's value is sitting around the same level it spiked to when the ASH abstract was released.

You'll recall, the abstract said the drug was creating changes at the cellular level, but there was no mention of clinical improvements. It seemed logical that if imetelstat was changing the out-of-control cells, clinical symptoms would improve, but without a mention of it in the abstract and the company not able to say much, investors were left reading between the lines.

The data presented at ASH suggest the drug is indeed improving clinical symptoms in addition to those seen under the microscope. The spleen, for instance, is supposed to sit under the rib cage but becomes enlarged in many myelofibrosis patients because blood production shifts from the infected bone marrow to the spleen. Five of 13 patients with an enlarged spleen saw their spleen size reduced by 50% or, for spleens that were only slightly enlarged, reduced by so that it couldn't be felt beyond the rib cage.

A third of the 12 patients with anemia -- low hemoglobin levels -- also improved, another sign that the drug is improving clinical symptoms that doctors care about.

Despite the good data investors sold in large part because the clinical trial wasn't designed to be a pivotal trial needed to support an FDA approval for imetelstat. Geron is going to have to run a larger trial to confirm the study's findings.

By the time imetelstat gets to the market there could be multiple drugs available. In addition to the aforementioned Jakafi, Cell Therapeutics (NASDAQ:CTIC) is developing pacritinib and Gilead Sciences (NASDAQ:GILD) has two drugs, momelotinib and simtuzumab, which may help myelofibrosis patients. While the data is still young it appears imetelstat is the best of the bunch at least when it comes to efficacy.

It's highly likely the patients are getting better because of the drug -- spontaneous improvements are rare -- so I don't think efficacy should be a big concern for investors going forward.

The bigger issue could be the drug's safety. Imetelstat appears to be lowering platelets and white blood cells, especially when dosed more frequently. It's probably manageable, but with just 33 patients in the current study, it's hard to get a good handle on the exact risk.

Myelofibrosis can transition into leukemia, which patients die from, so the FDA should be tolerant of manageable side effects. Whether the side effect profile limits which patients get imetelstat and therefore how well it competes against Incyte's, Cell Therapeutics', and Gilead Sciences' drugs remains to be seen.

At a market cap of $660 million, the risk-reward profile looks reasonable for long-term investors. But you've got plenty of time to buy in given the long development time before imetelstat will be approved.

Or maybe not. Remember that chart above.