Please ensure Javascript is enabled for purposes of website accessibility
Log In Help Join The Motley Fool
Free Article Join Over 1 Million Premium Members And Get More In-Depth Stock Guidance and Research
By Alex Planes - Dec 14, 2013 at 11:15AM

Let's see what the numbers say about Huntsman.

Investors love stocks that consistently beat the Street without getting ahead of their fundamentals and risking a meltdown. The best stocks offer sustainable market-beating gains, with robust and improving financial metrics that support strong price growth. Does Huntsman (HUN 0.14%) fit the bill? Let's look at what its recent results tell us about its potential for future gains.

What we're looking for
The graphs you're about to see tell Huntsman's story, and we'll be grading the quality of that story in several ways:

What the numbers tell you
Now, let's look at Huntsman's key statistics: 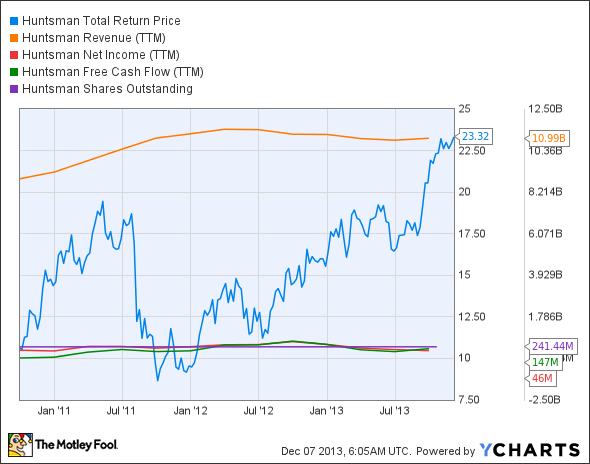 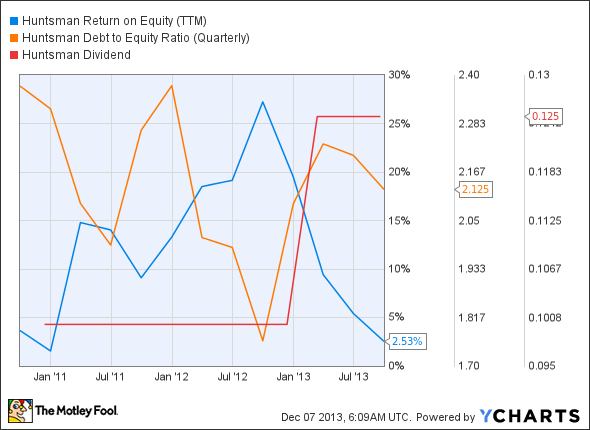 How we got here and where we're going
We looked at Huntsman last year, and it has lost one passing grade in its second assessment to finish with a mere three out of nine possible passing grades for 2013. Huntsman's revenue growth has not been matched on the bottom line -- declining profitability has dragged the company's score down on this test. However, rising free cash flow levels allowed Huntsman to boost its distributions, although these appear to be a bit higher than we'd like to see. How might Huntsman overcome these erratic weaknesses over the next few quarters? Let's dig a little deeper to find out.

Huntsman's latest quarterly results showed lackluster figures due to the substantial costs associated with its pigments division, as well as persistent international weakness, especially in Europe. However, the company has been able to partially offset the losses incurred in its pigments division through sulfate ore, which is currently being used to produce 60% of Huntsman's titanium dioxide (TiO2). DuPont (DD) has been similarly battered of late due to high titanium ore costs, which produced a wretched 39% slide in its performance chemicals division's operating profit. Fool contributor Neha Chamaria notes that the global TiO2 market has suffered from excessive inventory levels, which has dragged pigment prices to multiyear lows. Huntsman and fellow chemical giant Dow Chemical's (DOW) polyurethanes divisions were also plagued by high feedstock costs during the third quarter.

Fool analyst Taylor Muckerman points out that Huntsman and its peers have been streamlining their businesses to move away from the uncertainties of chemical demand. Huntsman and DuPont both plan to spin off their TiO2 business, which will allow them to concentrate on high profitable businesses -- assuming enough demand exists to absorb two major TiO2 manufacturers at the same time. The two companies could wind up hurting each other in an effort to get rid of these poor performers. Dow also divested its non-performing businesses to focus on Agricultural Sciences, which has delivered huge growth over the past few quarters. These three chemical companies are having trouble finding adequately skilled workers for their chemical divisions, which also doesn't help balance issues of demand and profitability.

Despite weakness in its own TiO2 segment and apparent plans for a spinoff, Huntsman's going ahead with a planned acquisition of Rockwood Holdings' titanium dioxide and performance additives segments for $1.33 billion in cash and debt. Neha Chamaria points out that the transaction will make Huntsman the world's second-biggest TiO2 producer after DuPont, but it may not have made the best decision for several reasons. According to Bloomberg, Huntsman might also team up with Tronox to expand its TiO2 business, which could pose potential threats to DuPont's business, provided profit margins improve. This strategy of wading further into the TiO2 market while simultaneously appearing to distance itself from it does not indicate a coherent strategy from Huntsman's top brass, and could be a signal to investors that the company doesn't have a strong plan for the future.

Putting the pieces together
Today, Huntsman has some of the qualities that make up a great stock, but no stock is truly perfect. Digging deeper can help you uncover the answers you need to make a great buy -- or to stay away from a stock that's going nowhere.

Why This Niche Chemical Market Was Red-Hot in July