In 2013, companies with exposure to Macau, like Melco Crown, Las Vegas Sands (NYSE:LVS), and Wynn Resorts (NASDAQ:WYNN), had a great year on the back of growing revenues and profits. Surprisingly, as you can see in the chart below, Caesars Entertainment actually led the industry despite operational difficulties that make a turnaround seem improbable, but betting on a turnaround was what traders were looking for this year. 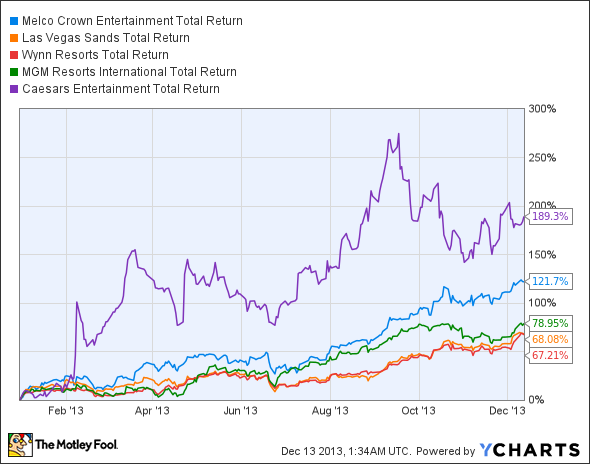 So, where should investors turn in 2014 after such outstanding gains in 2013? Here's a look at five companies I think will do well next year.

Most of that growth is concentrated on Cotai, where Melco Crown, Las Vegas Sands, and Galaxy have built sprawling casinos to attract mass-market gamblers and VIPs. The strategy has worked and over the next few years all six concessionaires in Macau -- including Wynn Resorts and MGM Resorts (NYSE:MGM) -- will open resorts there. You can see the future layout in the map below.

I like the growth potential for all companies with Macau exposure, but as I explained last month, Melco Crown is so expensive I would avoid it right now. That leaves Las Vegas Sands, Wynn Resorts, and MGM Resorts as the three gaming companies that I think will outperform in 2014.

Las Vegas Sands has the advantage of being the largest resort operator on Cotai and will likely outpace Macau's overall growth next year. Wynn Resorts is a conservative operator with little near-term operational upside but a new resort that could more than double revenue and earnings in 2016. MGM Resorts is highly leveraged but it has strong cash flow from Macau and is benefiting from recent growth in Las Vegas. If the economic recovery picks up steam next year MGM Resorts could easily top all other gaming stocks.

Two equipment stock picks
Casino operators aren't the only ones to watch in gaming. International Game Technology (NYSE:IGT) and Bally Technologies (NYSE: BYI) have tremendous opportunities to fill casinos being built around the world with gaming equipment and have huge upside in online gaming.

Nevada, New Jersey, and Delaware have all legalized online gaming and before long I think national regulation is on the way. Equipment providers will offer similar services to casinos online as they do in bricks-and-mortar casinos, building the software and technology of the games, but not taking the bets themselves. Companies like MGM Resorts or Caesars won't build their own technology, they'll rely on IGT or Bally to do it for them.

It's tough to tell exactly what the revenue potential is from online gaming but we're talking about a business with the potential of billions of dollars in revenue. Even a small percentage of that pie would be a huge win for IGT and Bally and 2013 could be a turning point for this business.

Foolish bottom line
Gaming stocks have grown tremendously over the past four years but there's still a lot of upside for investors. I'm not suggesting that triple-digit gains are in the cards for gaming stocks in 2014, but these can still be market-beating companies, particularly as Macau continues to grow.