Shares of next-generation display and lighting researcher Universal Display (NASDAQ:OLED) jumped as much as 9.3% higher in Monday's session. Behind the bounce, you'll find a positive research note from one of Universal Display's largest fans.

As a Universal Display shareholder, I'm not complaining about the rising share price. I'm also happy to see that analyst firm JMP Securities put in some legwork to support its bullish thesis. All that being said, let me just point out that JMP analyst Alex Gauna didn't exactly present anything new here. He simply reiterated a longtime "buy" rating and a $50 price target that was introduced in November. That also happens to be the highest analyst-backed price target currently available on Universal Display. I suppose investors like to be reminded of the basic investment thesis once in a while.

Gauna met up with Universal Display's management and walked away just as excited as ever about the stock. He sees multiple catalysts for the shares in 2014, including a larger commitment from biggest client Samsung and perhaps a fresh long-term contract with LG Display (NYSE:LPL), which has hinted about OLED-powered smartphones and TV screens for years without ever pulling the trigger.

Furthermore, Gauna believes that Apple (NASDAQ:AAPL) could tap Universal Display and one of its manufacturing partners to produce low-power screens for an Apple-branded smartwatch. A wrist-mounted iOS device could be the next big thing in mobile computing, given Apple's tendency to ship millions of units of every new device.

Universal Display has been a somewhat frustrating stock to own over the past few years. Shares have traded largely sideways along a very bumpy road, even as the company started reporting reliably positive earnings on skyrocketing revenue. If JMP's $50 target materializes, 2014 will make our patience worthwhile. And I'd still hold on for even greater long-term returns. 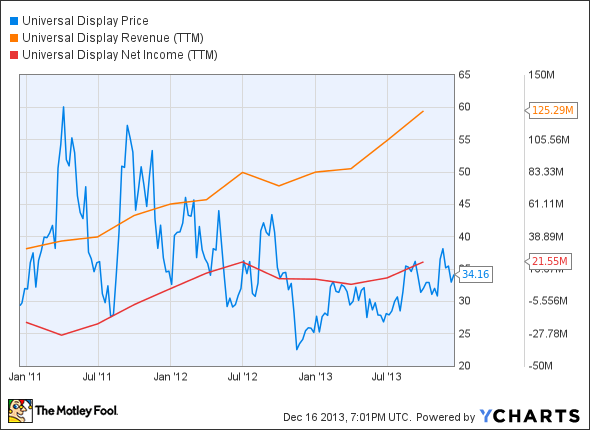