Atlantic Power offers a huge 11% dividend yield, but investing today may simply not be worth it. Here's why.

If you're a utilities investor, chances are you're in it for the big, fat dividends that come rolling out every quarter or, in Atlantic Power's (AT) case, every single month. But there's one major reason why Atlantic Power and its super-sized dividend may not be right for you.

Risky business
Traditionally, utilities are attractive investments due to their consistent, inflation-protected returns. In four words: People always use power.

Regulators may prohibit companies from pulling in major profit, but those same regulators ensure specific returns on equity for utilities' regulated businesses. For example, TECO Energy (NYSE: TE) is in a much better place this year than last, since Florida regulators recently gave the thumbs-up for its Tampa Electric utility to pull in 9.25% to 11.25% return on equity. TECO Energy had previously expected its 2013 return on equity to clock in at less than 9%.

But Atlantic Power operates exclusively in competitive markets. Although the company sells electricity to utilities and industrial customers under long-term power purchase agreements (PPAs), it's never guaranteed any percentage return on equity by regulators. Most utilities have their hands in both regulated and unregulated businesses, but Atlantic Power has chosen to stick with the riskier (albeit potentially more profitable) unregulated sector.

Big dividend = big trouble
There's a reason why Atlantic Power's dividend yield is currently 11%. Although the utility slashed its dividend by 66% in early 2013, its plummeting stock price has kept its yield at a rate that most of its competitors can't touch. 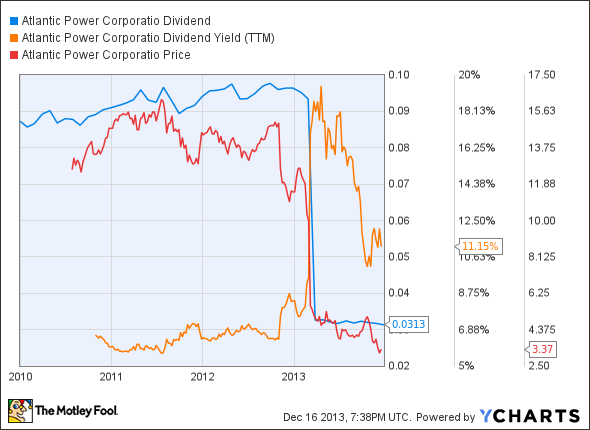 AT Dividend data by YCharts.

Exelon Corporation's (EXC -0.02%) stock is near its 52-week low, and it too cut its dividend by 40% earlier this year. But while Exelon stock has fallen just 6.3% in the last year, Atlantic Power stock has shaved off 69% of its overall value. That leaves Exelon stock with a 4.5% yield, less than half of Atlantic Power's. 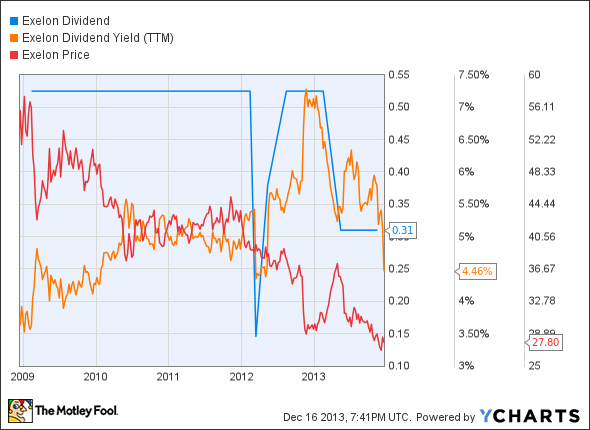 Meanwhile, utilities like Southern Company (SO 0.89%) have steadily grown their dividend over the past five years and beyond. Its distributions look like a staircase, and even as Southern Company's share price has fallen over the last year, its yield remains a reasonable 5%. 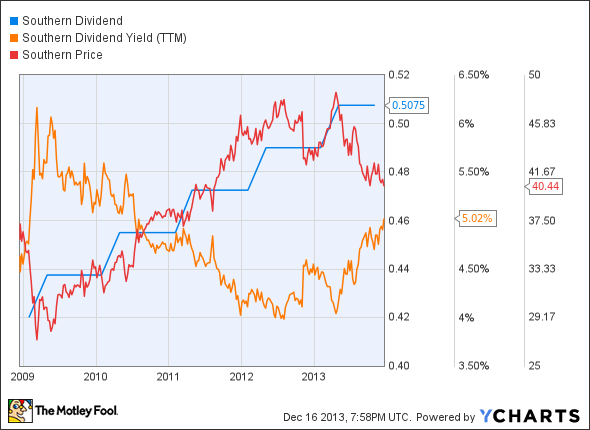 SO Dividend data by YCharts.

How low can you go?
With Atlantic Power stock down in the dumps, many investors are eyeing Atlantic Power as a value grab. Just this week, shares flew 12% when the company announced that it would keep its monthly dividend distribution unchanged. But while that announcement will mean more cash in investors' pockets over the short term, it does little to nothing in terms of long-term value add.

Looking ahead, the company has a few things working against it. First, Atlantic Power relies on natural gas for 58% of its generation capacity  -- and natural gas is getting more expensive. Cheap natural gas has been the bosom buddy of the economic recovery, but rising prices are making other fuel sources like nuclear increasingly competitive once again. 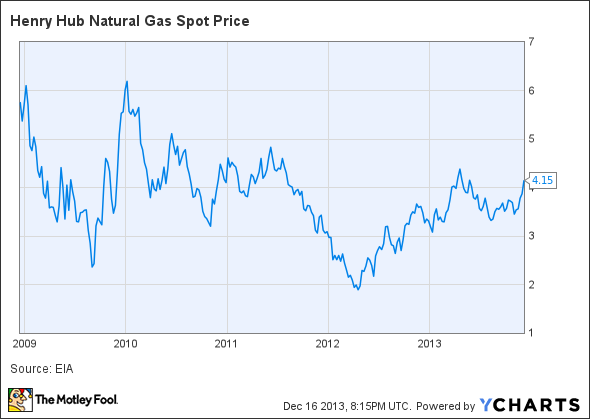 Second, Atlantic Power's scale pales in comparison to that of its competitors. The company has around 3,370 MW of gross generation capacity to its name, with ownership interests around 2,120 MW. Compared to Exelon's 34,700 MW of owned capacity and Southern Company's 45,740 MW of generating capacity, Atlantic Power doesn't hold a candle. And while scale isn't everything, the infrastructure of large generating facilities and transmission projects makes it especially important to this sector.

Atlantic Power shares may go up. It's made some interesting moves in the past year, including divesting traditional fuel plants and adding on a sizable chunk of wind and biomass power.

But shares may also continue their decline, and for shareholders looking for long-term investments with stable returns, Atlantic Power doesn't add up. Its risk outweighs its potential return, and its mouth-watering double-digit dividend yield simply isn't worth the worry.

Fool contributor Justin Loiseau has no position in any stocks mentioned, but he does use electricity. You can follow him on Twitter @TMFJLo and Motley Fool CAPS @TMFJLo.

The Motley Fool recommends Exelon and Southern Company. Try any of our Foolish newsletter services free for 30 days. We Fools may not all hold the same opinions, but we all believe that considering a diverse range of insights makes us better investors. The Motley Fool has a disclosure policy.