Please ensure Javascript is enabled for purposes of website accessibility
Free Article Join Over 1 Million Premium Members And Get More In-Depth Stock Guidance and Research
By Justin Loiseau - Dec 19, 2013 at 11:00AM

Solar power may be cost-competitive with natural gas by 2025. But natural gas bulls can breathe easy -- there are plenty of profitable power plays.

There may be rainy days ahead for natural gas. The nation's newest cheap fuel is getting more expensive, and a new report predicts that solar (yes, solar) will be cost competitive with natural gas by 2025. But the news isn't all bad for natural gas investors. Here's what you need to know.

Solar soars?
According to Lux Research, unsubsidized utility-scale solar power will give natural gas a run for its money by 2025. In 10 different regions around the globe (including the United States), solar electricity prices will drop enough over the next 12 years to make the renewable energy as cheap as natural gas.

Lux Research cites two main reasons for the competitiveness switch. First, solar power system costs are expected to drop almost 40% by 2030. A penny saved is a penny earned and, in solar's case, expensive capital expenditures have been a major barrier to uptake.

On the front end, government subsidies like production tax credits have helped some utilities stock up on solar over the past few years. At the same time, power purchase agreements (PPAs) ensure that, once built, solar companies and utilities can sell off their solar power to other utilities, local governments, and even large corporations.

If it seems too good to be true, SunPower ( SPWR -9.11% ) is already defying solar bears by building a 70 MW subsidy-free solar farm in Chile. Solar system costs have dropped a whopping 50% over the past three years, and Lux Research expects that trend will continue to benefit SunPower and other producers.

The second reason for solar's big break is "barriers to shale gas production." Specifically, the report cites anti-fracking policies in Europe and expensive capital costs in South America. Anti-fracking policies are a major reason why coal consumption has remained high in Europe, so it should come as no surprise that environmentally conscious Europeans would be keen to switch to solar if the opportunity should arise.

The double-whammy natural gas/renewable offering is a major reason why NextEra Energy ( NEE -0.67% ) has fared fantastically in recent years. With 320 MW to its name, NextEra Energy claims the title of largest generator of solar energy in the nation. But that amounts to just 1% of the utility's generation, while natural gas snags 23% and wind accounts for a whopping 57%. 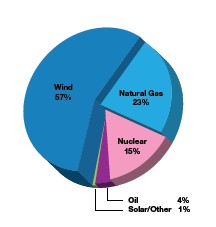 NextEra Energy has made the most of government subsidies to ramp up its renewables effort, but the utility's diverse energy portfolio is ultimately the company's best feature. When the wind doesn't blow and the sun doesn't shine, NextEra Energy's natural gas assets will be there to deliver.

Solar synergy
Investors trying to pick the next big winner may be missing the point. Lux Research's findings may ruffle the feathers of natural gas bulls and solar bears, but the wisest investors realize there's plenty of good news for everyone. America is setting itself up for a cheaper, cleaner, and more diversified energy portfolio than it's ever had before.