Real gross domestic product, or GDP, increased at a seasonally adjusted annual rate of 4.1% for third-quarter 2013, according to the third and final Commerce Department report (link opens as pdf) released today.

This number represents the economic growth in the U.S. from the second quarter to the third quarter, and is significantly larger than the Commerce Department's previous estimate of 3.6% growth. In second-quarter 2013, growth clocked in at 2.5%. 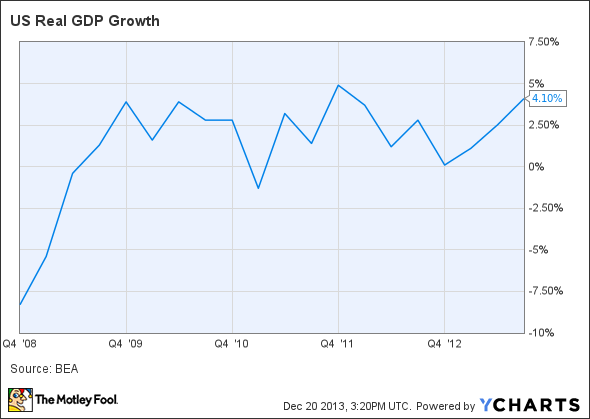 According to the report, this third revision's jump is due primarily to upward revisions in personal spending and nonresidential fixed investments.

Third-quarter growth saw significant increases in private inventory investment, personal spending, and state and local government spending (this adds to GDP). Imports, which count negatively toward GDP, tapered off, but so did GDP-growing exports.

This latest Commerce Department report also publishes inflation numbers via the GDP Price Index, which remained at a seasonally adjusted annualized rate of 2%.

Two days ago, the Federal Reserve published its latest economic projections, which put 2013 GDP growth in a general range of 2.2%-2.3%, which is estimated to bump up to somewhere between 2.8% and 3.2% growth for 2014.