Let's see what the numbers say about Seagate (STX).

Investors love stocks that consistently beat the Street without getting ahead of their fundamentals and risking a meltdown. The best stocks offer sustainable market-beating gains, with robust and improving financial metrics that support strong price growth. Does Seagate (STX) fit the bill? Let's look at what its recent results tell us about its potential for future gains.

What we're looking for
The graphs you're about to see tell Seagate's story, and we'll be grading the quality of that story in several ways:

What the numbers tell you
Now, let's look at Seagate's key statistics: 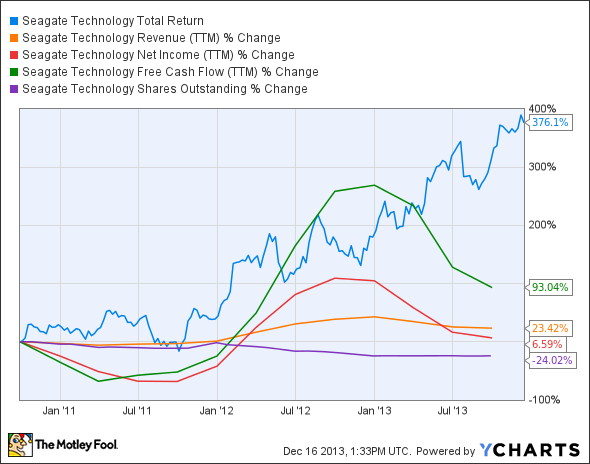 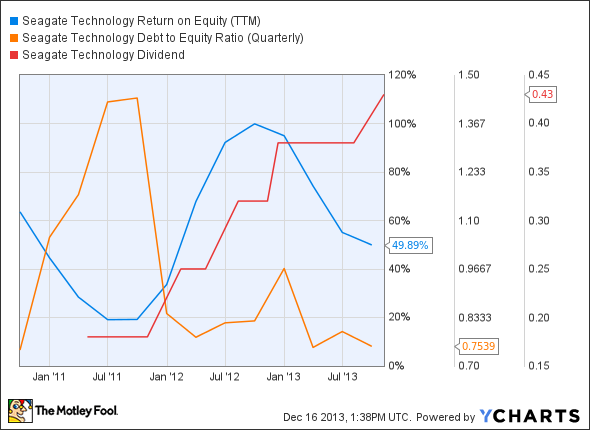 How we got here and where we're going
Things don't look quite as good for Seagate in its second assessment as they did last year. A combination of weakening PC demands and diminished pricing power from the rebuilding of manufacturing capacity have shaved a shocking five points off of last year's score, and the company racks up only four out of nine possible passing grades for 2013. Seagate's revenue and margins have declined drastically over the trailing 12 months, costing it several failing grades. However, Seagate's shareholders have enjoyed robust growth over the past few years regardless of these weaknesses, as the company still possesses unmatched strengths in data storage solutions – and its ridiculously low valuation over the years has also helped draw in value investors. How might Seagate reverse the recent slide in its fundamentals? Let's dig a little deeper to find out.

Over the past few quarters, hard-drive maker Seagate has been struggling with a lack of demand for desktop and laptop PCs, which produced (most recently) worse-than-expected third-quarter results. A number of tech giants, from old-line software titans to social-media superstars, have also been pushing cloud-based storage solutions for quite some time. This might seem like a good thing for storage media sales, but it's important to keep in mind that major cloud services are typically much more efficient users of resources than individuals – most people have gigabytes of free space on their hard drives, but cloud storage is designed to expand based on demand.

SanDisk (NASDAQ: SNDK) and Western Digital (WDC 4.42%) also continue to compete with Seagate's traditional hard-drives and SSDs. However, the fact that Western Digital is Seagate's only significant competition in the hard disk drive space has been advantageous for both companies as well, and Seagate has clearly been the winner in this duopoly structure over our three-year tracking period: 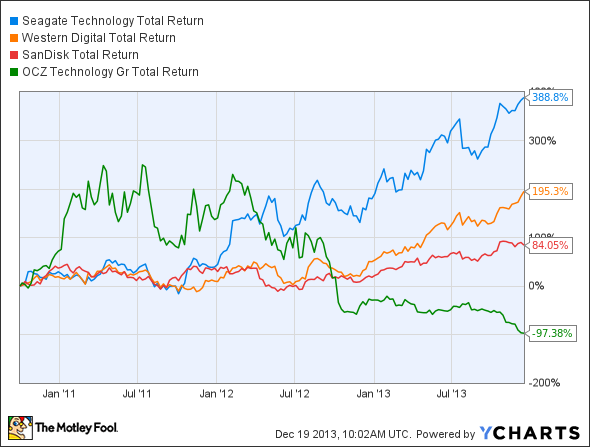 Fool contributor Jason Ditz notes that solid-state drives (SSDs), which are smaller and faster than the traditional hard drives because of their construction under semiconductor methods, are also much more expensive for low-end customers. This provides a potential opportunity for Seagate and Western Digital in cost-effective hybrid drives, which merge hard disk drives with small-capacity on-board SSDs for important functions. Seagate should also benefit from the deployment of shingled magnetic recording technology, as it expects to develop a 20-terabyte drive by the end of the decade. At the same time, it has also designed ultra-thin hard drives for tablets, which deliver superior performance and capacity for the price when compared to solid-state storage products. On the other hand, Western Digital's helium-filled drive, which has cut total product weight by 20% and has also reduced mechanical problems, might encroach on Seagate's traditional hard-disk drives business.

Seagate and its peers have been aggressively looking to expand their business through inorganic growth amid fierce competition in the storage market. Longtime Fool contributor Rick Munarriz notes that Seagate could soon make a bid for Fusion-io (FIO.DL), which holds a strong position in high-end enterprise SSDs. The acquisition could be relatively inexpensive, as Fusion-io's shares have fallen a long way over the past year. On the other hand, Western Digital recently completed its acquisition of enterprise-based data center specialist Virident Systems, which could help it stay ahead of Seagate in flash memory storage.

Putting the pieces together
Today, Seagate has some of the qualities that make up a great stock, but no stock is truly perfect. Digging deeper can help you uncover the answers you need to make a great buy -- or to stay away from a stock that's going nowhere.