Investors love stocks that consistently beat the Street without getting ahead of their fundamentals and risking a meltdown. The best stocks offer sustainable market-beating gains, with robust and improving financial metrics that support strong price growth. Does Thompson Creek Metals (OTC:TCPTF) fit the bill? Let's look at what its recent results tell us about its potential for future gains.

What we're looking for
The graphs you're about to see tell Thompson Creek's story, and we'll be grading the quality of that story in several ways:

What the numbers tell you
Now, let's look at Thompson Creek's key statistics: 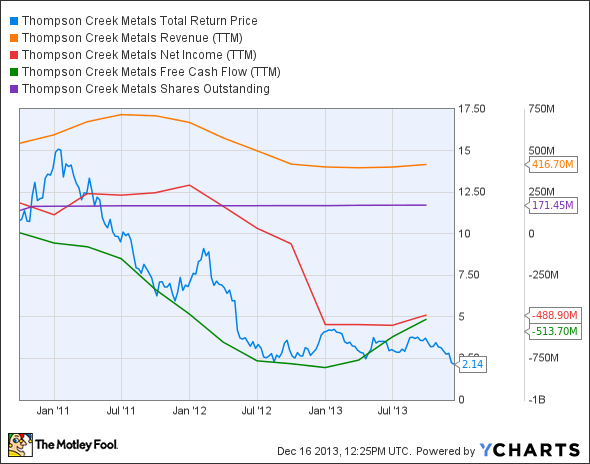 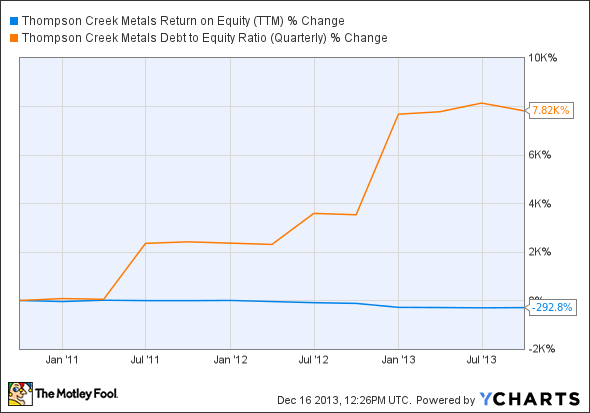 How we got here and where we're going
Things don't look good at all for Thompson Creek in its second assessment as the upstart miner has failed to earn even a single passing grade for 2013, losing the underwhelming two passing grades it earned last year. Miners of all stripes have been plagued by persistently low commodity prices and generally disappointing demand, but Thompson Creek appears worse off than most. Is there any hope left for Thompson Creek today? Let's dig a little deeper to find out.

In its latest quarter, Thompson Creek's top and bottom lines both improved significantly on the heels of higher sales volumes and lower cash costs for molybdenum. Aggregate molybdenum sales surged 47% to 8.3 million pounds, while average cash costs declined by 37% to $5.93 per pound. However, Thompson Creek continues to suffer from low molybdenum-oxide prices, which are currently dawdling at levels between $8 and $10 per pound, compared to levels of $25 to $40 several years ago. Fool contributor Dan Caplinger notes that molybdenum miners have been hard-hit by low commodities prices around the world, which has hurt Thompson Creek, Taseko Mines (NYSEMKT:TGB), and Molycorp (NYSE: MCP) more than most other stocks of any stripe (Thompson Creek has lost roughly the same amount of value as Molycorp): 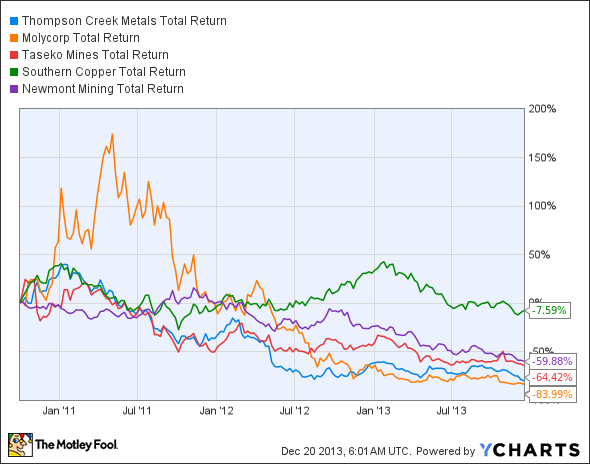 Fool contributor Sean Williams points out that costs associated with the development of Thompson Creek's massive Mt. Milligan copper-and-gold mine exceeded Thompson Creek's original budget by a whopping $750 million, which has already pushed the beleaguered miner to sell off 52% of its gold royalty interests to Royal Gold (NASDAQ:RGLD) in lieu of cash for the completion of the mine. The mine boasts approximately 2.1 billion pounds of copper reserves, which might help Thompson Creek drive cash flow levels back up once it starts commercial production – note on the chart above that only copper specialist Southern Copper has avoided a share-price meltdown.

Thompson Creek and Royal Gold expect to produce 262,000 ounces of gold per year at Mt. Milligan, but if gold prices continue to deteriorate, this may not be as beneficial as once imagined -- Newmont Mining recently took a $1.77 billion writedown on its Australian mines amid falling gold prices. Taseko Mines also suffered a Mr. Milligan-esque setback at its New Prosperity copper and gold project, after the Canadian Environmental Assessment Agency rejected Taseko's long-awaited proposal on the grounds of severe environmental concerns.

Thompson Creek also recently named Jacques Perron as its new CEO, replacing retiring head honcho Kevin Loughrey. Dan Caplinger notes that the company hopes molybdenum prices will recover enough to allow it to pay off significant debts maturing over the next four to six years. According to the CIBC World Markets, Thompson Creek and Molycorp would have to restructure their debts if the metal's price doesn't increase by at least 30%.

Putting the pieces together
Today, Thompson Creek has none of the qualities that make up a great stock, but no stock is truly perfect. Digging deeper can help you uncover the answers you need to make a great buy -- or to stay away from a stock that's going nowhere.