After stumping the Street and beating Caterpillar with a solid 44% gain this year, Manitowoc looks ready to outperform the industry leader again in 2014.

Investors in the construction equipment space were left scratching their heads this year. While industry leader Caterpillar (CAT -1.15%) hugely disappointed with its lackluster performance, two little peers, Manitowoc (MTW -0.38%) and Terex (TEX 0.12%), flew to beat Caterpillar by a gaping margin. The year-to-date returns chart for the three stocks may leave you dumbfounded. 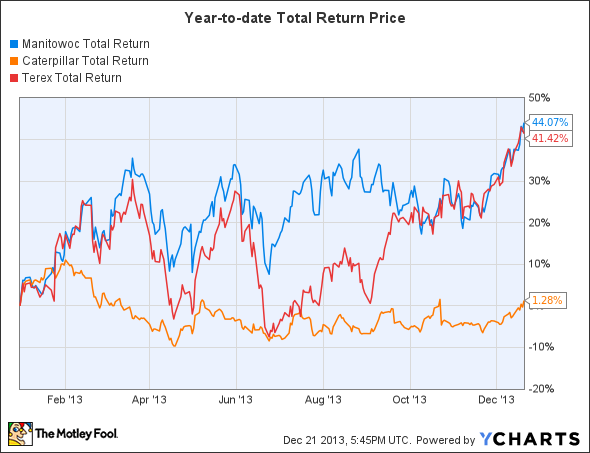 Caterpillar is trying hard to end the year on a positive note even as Manitowoc and Terex have zoomed past the 40% return mark. While Caterpillar was hit by a weak mining sector, Terex made the most of an uptick in construction activity in the U.S. But Manitowoc was the real star, having outperformed despite battling a slowdown in its food service equipment business. What clicked for Manitowoc this year, and are the growth catalysts for 2014 good enough for the rally to be sustained?

Quick wrap-up
Before I tell you about Manitowoc's prospects for 2014, here's a fascinating chart that sums up the company's operational performance over the past 12 months: 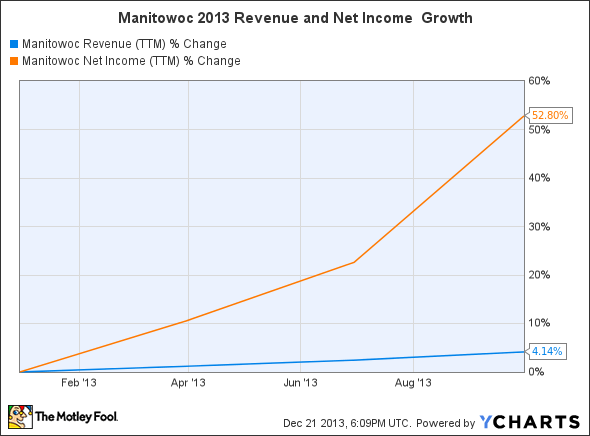 Manitowoc's revenue grew only 4% to about $4 billion, but management did an incredible job in converting those small incremental sales into profits, as evidenced by the whopping 53% jump in the company's bottom line.

Delving a little deeper, even as sales from Manitowoc's crane segment jumped nearly 8% for the nine months ended Sept. 30, 2013, sales from its food service segment grew only 2% during the period. Increased demand for cranes, backed by higher construction activity in the U.S., drove Manitowoc's revenue higher. Unlike Caterpillar and Terex, both of which derive nearly three-quarters of their revenue from international markets, Manitowoc gets less than half its sales from outside North America. That clearly worked in Manitowoc's favor this year even as peers bore the brunt of dwindling demand from the Asia-Pacific and Latin American regions.

Manitowoc's food service business, on the other hand, remained under pressure as key customer McDonald's (MCD -0.58%) trimmed its capital expenditure as the year progressed, deferred some new store openings, and focused on renovating existing restaurants instead. Since demand for Manitowoc's fryers, beverage dispensers, and ice machines is closely tied to the health of the restaurant industry, any slowdown in consumer spending bodes ill.

The right focus
Nevertheless, Manitowoc's stupendous growth on the bottom line despite slow sales is commendable. Management mentioned cost reduction and improved efficiency as its priorities for 2013, and it clearly delivered as promised. Operating profit from the company's crane business jumped 52% for the nine months through September even as the food service segment reported 4% lower operating profit during the period.

Manitowoc also took some pressure off its lopsided balance sheet in 2013 by repaying roughly $200 million of debt, which reduced interest expenses and boosted margins. Naturally, the company's focus on strengthening its balance sheet while improving profitability was enough to fuel investors' optimism.

But no ride is perfect, and Manitowoc has several challenges to tackle as it steps into the new year.

Cash crunch
Insufficient cash flow is the primary concern. While management is trying to offload debt, the pace leaves much to be desired. Manitowoc piled on huge debt when it acquired food- equipment maker Enodis in a $2.7 billion deal in 2008. Unfortunately, even as Manitowoc's food service business failed to pick up much since then, debt burden remains. The company still shoulders $1.7 billion in long-term debt, while it generated only $190 million in free cash flow over the past 12 months, holds less than $100 million in cash, and sports an interest coverage ratio of just two. That's not a pretty picture.

Slowing order rate
Manitowoc's cash flows could get a big boost if it continues to rake up high profits next year. But earlier this month, Goldman Sachs downgraded its rating on Manitowoc stock and cut the 2014-2015 earnings per share estimate by 5%, backed by slower "crane capex recovery" and low utilization rates in the U.S. While Manitowoc doesn't provide details about its crane utilization rates, the largest crane rental company in the U.S., Morrow Equipment, reported only 50% utilization for its tower cranes in mid-2013, as compared to 80% in 2008. That's worrisome.

In fact, there's greater evidence that the crane market might be slowing down. Manitowoc and Terex reported 42% and 28% year-over-year decline, respectively, in their crane backlog value for the nine-month period. Since backlog is a key indicator of future potential revenue, this bodes ill for the companies going into 2014. Manitowoc also faced a setback this year when its joint venture with China-based Shantui ended abruptly in September. If infrastructure spending in China improves next year, Manitowoc may lose out even as peers rush to get a foothold in the market.

Foolish takeaway
Even if the demand for cranes remains strong next year, McDonald's doesn't expect the restaurant market dynamics to change much. That's bad news for Manitowoc, because sluggishness in either market will hurt its revenue. Cash crunch also leaves the company with little room to boost its minuscule dividend yield of 0.4%.

That said, Manitowoc is certainly in a better situation than Caterpillar at the moment. So even if Manitowoc stock were to slow down a bit next year, it will likely outpace Caterpillar. And that should be a good reason to keep Manitowoc on your radar for 2014.