For Tesla Motors (NASDAQ:TSLA) shareholders, 2013 was a dream come true. For Tesla shorts, it was a nightmare. As of this writing, shares have soared about 350% since the beginning of the year. That would have turned a $10,000 investment into $45,000 -- not bad at all. Led by the iconic entrepreneur Elon Musk, the company undoubtedly took the Street by surprise. What's the story?

They didn't believe him
In 2011, Musk told the world Tesla would soon deliver 20,000 of the Model S per year, but the Street didn't believe him. The car hadn't even gone into production yet. Even when Tesla continued to insist in 2012 that demand for Model S based on net orders suggested deliveries of the vehicle will surpass 20,000 in 2013, the market demanded proof. In 2011, Tesla stock gained only 7%. Even in 2012, Tesla stock rose just 19%.

How in the world would Tesla go from selling a few hundred sports cars to 20,000 Model S in one year, investors wondered? How does Musk know demand for its new all-electric vehicle will be so robust? Tesla's goal was simply too big for the Street to wrap their minds around it. How could Tesla go from producing hundreds of Roadsters per year to producing hundreds of Model S vehicles per week?

But Musk kept his word. While the company missed guidance for Model S deliveries in the first two quarters of its availability because of production limitations, Tesla was easily on pace to meet its audacious goal by the first quarter of 2013, when it reported 4,900 Model S deliveries. 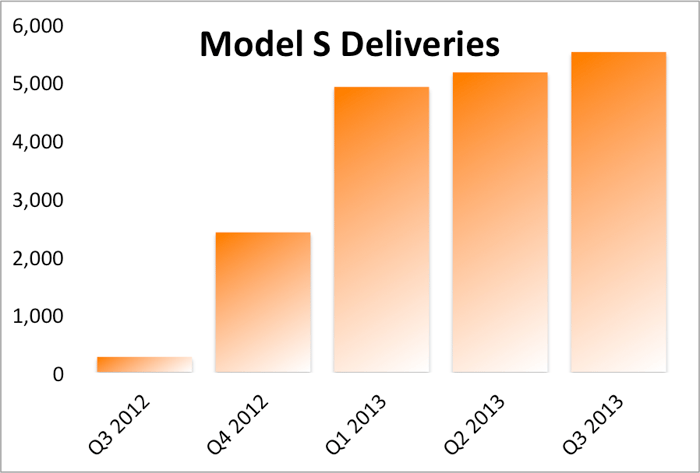 Though Tesla hasn't announced fourth-quarter results yet, it has guided to deliver 21,500 vehicles in 2013 -- all on an advertising budget of zero.

Big plans
But Tesla's big plans didn't stop at 20,000 vehicles. In 2013, Tesla revealed that it expected to reach an annualized rate of deliveries of 40,000 by late 2014, thanks to improving production and a rapid global expansion.

Even more, Tesla has been rapidly expanding its Supercharger network both domestically and internationally. No need for investors to worry about the required infrastructure for fully electric vehicles any more (at least the Tesla-branded ones); Tesla is taking care of this issue itself.

Then, of course, there is Tesla's expansion into China. With a plan to begin deliveries in the country in the first quarter of 2013, Tesla has already received hundreds of reservations for the Model S in the country, according to China Daily.

The most important forward-looking driver for Tesla's stock, however, is Tesla's goal to launch its more affordable electric car in 2016 or 2017. Elon Musk has said that when Tesla ships this car, the company wants to be delivering hundreds of thousands of cars per year. This would make Tesla a major player in the automotive world.

Can Tesla deliver?
Once again, we're asking the same question investors were in 2011: Can Musk live up to his wildly bullish outlook? It may seem naive to believe Musk can deliver again just because he did in the past, but that's exactly what investors are betting on today with the stock trading at 10.7 times sales.

Elon Musk isn't just any CEO. And Tesla isn't a typical company. The Model S and its long list of accolades is living proof that Musk & Co. can execute on levels beyond our expectations. While it may be tough for many investors to bet on Tesla at these levels, the company has at least proved that betting against it probably isn't the smartest thing to do.

Looking Back: How Tesla Surprised Everyone in 2013 @themotleyfool #stocks $TSLA Next Article
Current