When people think of energy they often think of Big Oil and the companies we pay regularly when filling our gas tanks. I'm talking about ExxonMobil (NYSE:XOM), Chevron (NYSE:CVX), BP (NYSE:BP), Royal Dutch Shell (NYSE:RDS.A), and Total (NYSE:TTE). They dominate oil and natural gas production, refining, and marketing or distribution, and are some of the biggest companies in the world.

These companies have grown consistently over the past century as our appetite for oil has grown worldwide, but there are some challenges facing the industry over the long term. Energy growth isn't what it once was and, looking farther out, it appears margins will get smaller and smaller. Here's what investors should be concerned about.

Demand growth has slowed
While the amount of oil consumed globally is up over the last year, the rate of growth has slowed in the past decade. The main reason is a decline in oil demand in the U.S. and Europe. 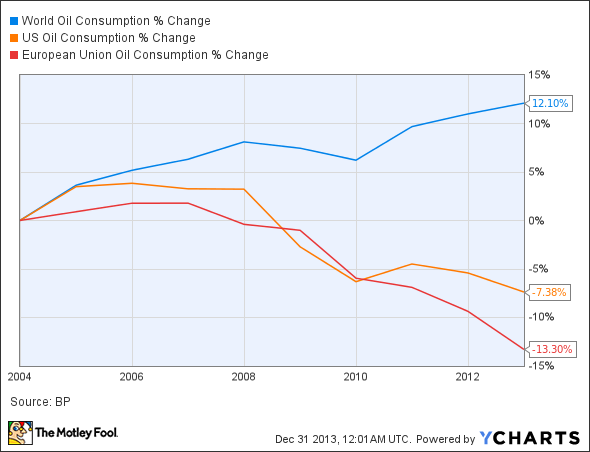 The recession has something to do with declining oil consumption in developed countries, but high gas prices and increased fuel efficiency are an even bigger driver. In the U.S., the new CAFE standard requires auto fleets to average 54.5 miles per gallon by 2025. Most vehicles are getting more efficient; add in growing sales of cars compared to SUVs and you have the results above.

For global demand to fall, China and India will need to see slower growth or increased efficiency from their auto fleets. I see both as distinct possibilities in the next few years.

Oil is getting more expensive to recover
The world doesn't have a shortage of oil, but it does have a shortage of cheap oil. There's a reason that shale oil drilling has become hot in the U.S. and ultra-deepwater locations have accounted for about half of the new reserves found this year. The easy oil has already been found so explorers have to start stretching resources and technology to find new oil.

That's pushed up the cost of oil and squeezes either upstream exploration profits or refining profits -- unless you can pass that cost to consumers. The problem for Big Oil is that consumers have become more price sensitive now that gasoline costs more than $3 per gallon. They're finding alternatives attractive, which is a long-term concern of the oil industry.

Alternatives are closing in quickly
If I offered you the chance to live without going to the gas station or buying natural gas to heat your home would you take it? Both are becoming real alternatives to traditional energy sources across the country and around the world.

Electric vehicles from Tesla Motors, Ford, Nissan, and others are now a viable alternative to conventional gasoline vehicles and will only get better as technology improves. Solar energy is offsetting natural gas as a source of new power generation, and as costs fall it will continue to grow worldwide. The clean energy revolution is impacting Big Oil and it's not just environmentalists who are buying in -- the economics of these alternatives are now attractive to consumers.

Hitting Big Oil where it hurts
The trends I've outlined above have already hurt the performance of Big Oil. You can see below that ExxonMobil, BP, Chevron, Royal Dutch Shell, and Total have all seen net income decline over the past two years as costs have gone up and revenue hasn't kept pace.

I think consumption in developed countries will continue to fall, while alternative fuels will grow. That will put top-line pressure on oil companies, and with exploration costs rising the bottom line will continue to shrink as well.

Shrinking Big Oil
The reign of Big Oil may be coming to an end, though very slowly, and for investors I don't think there's much growth to be had. These companies will lose revenue and earnings and stocks will fall from the high valuations we see today. The process won't be swift, but in 20 years these won't be the powerhouse companies we know today.