Consumer attitudes toward a product or technology are critically important in determining a brand's success. Unfortunately, public opinions aren't always rooted in facts. While a new labeling initiative at Whole Foods Market will be great for growing business, it could have disastrous consequences for biotechnology and unintentionally spread misinformation about biotech crops.

Whole Foods Market (WFM) is pouring a tremendous amount of effort into a store-wide labeling initiative seeking to notify consumers which products contain ingredients produced from genetically modified organisms, or GMOs, by 2018. The move will be great for building out the company's loyal customer base and securing the trust of its growing following. When coupled with the internal goal of boosting U.S. store count by 20%, it also creates a growth opportunity for organic brands from General Mills (GIS 0.70%) and smaller producers. 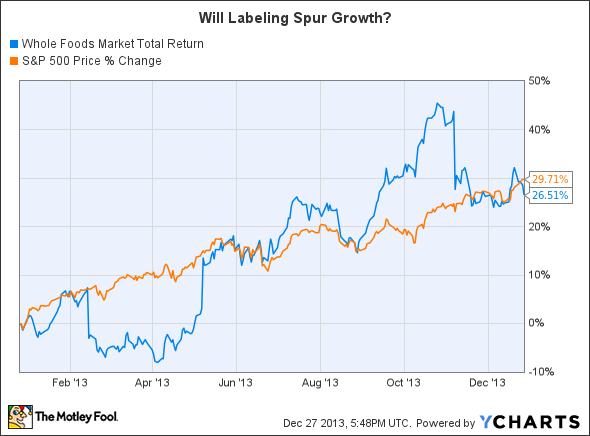 But when it comes to public opinion concerning science, the company's labeling policy is appalling. It may be unintentional, but Whole Foods Market is fostering mistrust in science without adding any value to the conversation about the potential health risks associated with consuming GMO foods. Caving to consumer emotion -- rather than making evidence-based decisions -- sends a powerful message against science, specifically biotechnology (one of the most important facets of the 21st-century economy). It could also have harmful consequences for the national economy and the adoption of healthier, more environmentally friendly products by consumer giants such as McDonald's (MCD 1.75%).

The customer is always* right
Unfortunately, consumers who tout health risks associated with GMO foods or ingredients are wrong -- as countless scientific studies from independent researchers around the globe have concluded. Consider that engineered crops have been sold commercially since 1996 with millions, perhaps billions, of humans consuming engineered foods since. Given the track record of biotech crops and the numerous dead ends in the search for potential risks, an overwhelming majority of the scientific community sees no reason to be concerned.

Consumers and Whole Foods Market should therefore consider what spreading fear and misinformation means from an economic standpoint. The three major biotech industries -- industrial biotech, biopharmaceuticals, and biotech crops -- that make up the American bioeconomy generated $350 billion in 2012, which represented 2.5% of GDP, according to noted entrepreneur and author Dr. Rob Carlson. Adding $350 billion to the national economy may not seem like much, but the bioeconomy as a whole is expected to grow at a compound annual growth rate of 10%-15% for the next five years. By comparison, organic food and product sales totaled just $30.2 billion in 2012, while the most optimistic estimates call for the nation's economy to grow at a 3% clip.

While the importance of the bioeconomy is evident, the potential of Whole Foods Market's labeling initiative to negatively shape public opinion of science and biotechnology is not. Can it really have an impact?

Egregious policy for science
Public opinion about science's ability to improve the world is critically important for the adoption of new products, especially those stemming from biotechnology. Several of the first GMO foods, such as NewLeaf potatoes in 1998, were doomed by consumer outcry. Ditto for the early days of stem-cell advances, which first pursued embryonic cells before scientists discovered less controversial sources.

While biotech crops are well-established in the domestic food supply, new products are not fully insulated from consumer opinion. Consumer groups are already mobilizing against the possible use of Innate potatoes at McDonald's. The next-generation potatoes come with less black spots and produce less asparagine, which make them more environmentally friendly (less waste) and healthier (less carcinogenic compounds formed during frying) than their nonengineered counterparts. Nonetheless, people are opposed to the idea of tweaking natural products outside of traditional breeding techniques.

Community attitudes are crucial to the development of the Australian biotechnology sector. If Australians are not in favour of certain technological applications, efforts by scientists on R&D will be constricted. In addition, public attitudes help shape the regulatory framework and the degree of industry uptake. If community attitudes are assumed not measured, a host of potential benefits in fields ranging from medicine to food to textiles are likely to be lost, representing a lost opportunity for individuals, industry and the nation in general.

Cross out "Australia" and insert "America" -- or any country -- to get the same effect. Unfortunately, I fear that Whole Foods Market's new labeling policy will fan the flames of the GMO debate by adding an air of credibility to misinformed and factually incorrect arguments against biotech crops. Consumers can look for foods and products that contain the U.S. Department of Agriculture organic seal if they want to avoid using GMO products. Requiring suppliers to label products as GMO seems like more of a publicity stunt than a consumer necessity to me.

On the other hand, it seems to be an excellent move for investors and the organic food industry.

Brilliant policy for organic foods
Whole Foods Market is simultaneously positioning itself for growth and as a consumer hero by instituting mandatory labeling of all products that contain ingredients from GMOs sold in its stores. That will further cement the loyalty of its customer base, attract others who oppose the use of biotech crops, and catalyze sales of the company's organic brand 365.

It should also create growth opportunities for suppliers that wield organic brands of their own, such as Cascadian Farms from General Mills and Horizon from WhiteWave Foods. The effects may be even more profound for smaller suppliers looking to gain national exposure, including several of the smaller yogurt brands catapulted to the forefront after Whole Foods recent ouster of Chobani. Whatever the effect, revenue at Whole Foods Market should continue to track the overall growth in organic food. It's probably no coincidence that the company's total revenue and sales of organic food in the United States have both grown 43% since 2009 -- and the labeling initiative will likely result in the continuance of that trend.

Foolish takeaway
There is nothing wrong with deciding to eat organic food or to invest in the industry. But it is wrong to spread fear or misinformation about phantom health risks associated with GMO foods or ingredients when no credible links have been found. Unfortunately, Whole Foods Market has decided to side with consumers while overlooking the potential longer-term consequences. As the national and global bioeconomy grows, so will the importance of public opinion toward biotechnology. Perhaps consumers won't be as opposed to nonfood applications of biotechnology that contribute to the bioeconomy, considering the special relationship we have with food. Then again, why take the chance with poor policy?

Is This the Key to Blanketing the U.S. With Electric-Vehicle Chargers?