With the S&P Healthcare Equipment Select Industry Index up 32% this past year, it's clear that the industry performed well in 2013 -- but which stocks were the biggest winners?  Some of the best performers outpaced the index significantly last year, and, in this series, I review five of the biggest movers.

The number of people living with diabetes may nearly double to 44 million in the United States while spending may jump from $113 billion to $336 billion over the next 20 years.

That swelling patient population and surge in spending has investors contemplating potential market winners and losers and if last year is any indication, number one on my list, Dexcom (NASDAQ:DXCM), may be a winner.

Turning the corner to profitability?
When investors think about the opportunity in diabetes they immediately turn to Novo Nordisk (NYSE:NVO) and Eli Lilly (NYSE:LLY). Those two giants generate billions a year in sales from insulin and insulin pens.

Or, perhaps they think of Sanofi (NASDAQ:SNY) with its blockbuster drug Lantus, or Becton Dickinson (NYSE:BDX), the maker of replacement needles for Novartis and Lilly pens. Sanofi sold $638 million worth of Lantus in the U.S. during the third quarter. And Becton's diabetes product sales grew from $866 million in fiscal 2011 to $969 million in fiscal 2013, up 11.9%.

Regardless, they're probably not spending a lot of time thinking about Dexcom, a tiny company that lost $6 million in the third quarter, yet whose shares jumped nearly 150% in the past year 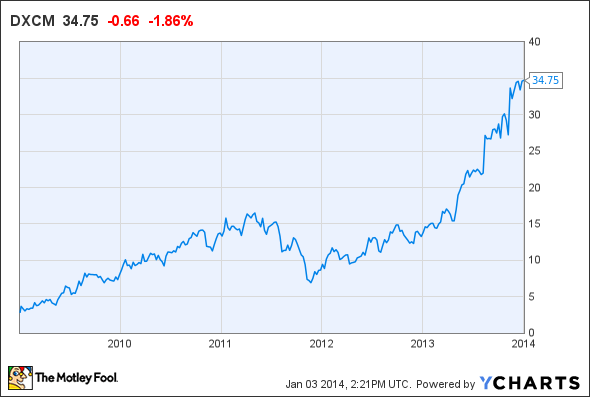 However, investors may start thinking more about the company given Dexcom's loss was half what the market expected and could indicate the company is finally on a path to profit. For comparison, Dexcom lost $17 million in the comparable quarter a year ago.

A lot of that success has come from margin expansion, which has grown to 65% thanks to margin of disposable sensors moving north of 70%.

Behind that margin expansion is rising demand for the company's wireless blood sugar monitoring device, the G4 Platinum system. That device, which alerts patients when their blood sugar drops too low, won FDA approval in 2012.

The G4 replaced a less accurate prior-generation model that offered a smaller transmission distance. Patients and doctors have responded with orders, lifting the Dexcom's third-quarter sales more than 100% to $42 million. That was strong enough for Dexcom to guide for full-year sales of $140 million for 2013 and 40% annual sales growth going forward.

Growing global epidemic
There's little question global demand for new diabetes solutions is heading higher. Over 365 million people have some form of diabetes worldwide and that number is expected to climb past a half billion people over the coming 20 years.

As more diabetics translate into more cases of heart disease and chronic kidney disease, the cost of treating those patients will challenge payers. Those challenges suggest a need for solutions that provide more detailed information that can help doctors and patients more accurately determine dosing of Sanofi, Novo, and Lilly's therapies, reducing the incidence of such life-threatening conditions.

That development would likely be welcomed by all three of those companies, each of which is hard at work developing new diabetes products.

Sanofi hopes to file for FDA approval of its next-generation long-lasting insulin drug U300 this year in a bid to protect Lantus revenue.  Novo controls more than a quarter of the market for diabetes care and has enjoyed double-digit sales growth over the past decade thanks to drugs like Victoza, the 49th best seller in the U.S. during the third quarter with sales of $275 million. And for its part, Lilly hopes to win some of Victoza's sales with dulaglutide, a drug that has posted solid results in trials that could help it hit the market as early as 2015.

Fool-worthy final thoughts
While Dexcom's G4 is covered by most private insurers, the company is still working at winning approval from Medicaid and Medicare. It's also working with regulators in overseas markets like Europe, India, and Mexico to launch products and has teamed up with insulin pump makers including Johnson & Johnson and Tandem.  If all those opportunities play out as hoped, investors may start thinking of Dexcom in the same terms as Novo, Lilly, Sanofi and Becton.