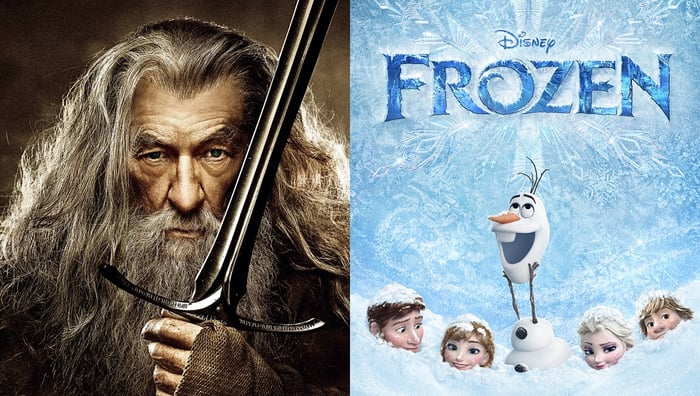 There's only one new movie pegged for wide release at the weekend box office tonight, but don't for a second think the battle for first place will be any less fierce.

First, we should see some decent numbers from newcomer Paranormal Activity: The Marked Ones, which already earned $1.2 million in late-night screenings Thursday and stands tall as the fifth installment in Viacom (NASDAQ:VIAB) Paramount's popular low-budget horror franchise.

The third and fourth films in the Paranormal series each launched on more than 3,300 screens to a solid first place in their own domestic weekend debuts, earning over $52.5 million and $29 million, respectively. What's more, both were massively profitable given their minuscule $5 million production budgets, and it's safe to expect more of the same this time around.

However, it's worth noting The Marked Ones is "only" hitting 2,867 screens to start. As a result, Viacom's latest effort may be hard pressed to beat its big-budget holdover competition, which most notably includes Disney's (NYSE:DIS) record-setting $150 million animated hit, Frozen, as well as Time Warner's (NYSE:TWX) current three-weekend champion, the $220 million The Hobbit: The Desolation of Smaug.

When all was said and done last Monday, Smaug fell just 7.9% to gross $29.03 million stateside last weekend, effectively maintaining its momentum and muting skeptics who had panned its slower-than-expected start. But Smaug still only narrowly beat Frozen, ticket sales for which managed to increase 45.6% in its fifth weekend to an incredible $28.6 million -- a performance likely owed to overwhelmingly positive word of mouth given Frozen's rare "A+" CinemaScore.

But that's also not to say they needed the boost; as of this morning, Smaug and Frozen had already earned over $637 million and $544 million, respectively, from movie-goers worldwide.

And let's not forget Viacom's own third-week contender in Anchorman 2: The Legend Continues. The popular sequel not only secured third place last weekend after decreasing a reasonable 25% to $19.7 million, but has also earned nearly triple its $50 million production budget so far.

More likely to keep up its pace this weekend, however, is Sony (NYSE:SONY) Pictures' star-studded, critically acclaimed American Hustle, which dropped just 2% in its third week to $18.7 million. To date, American Hustle has almost doubled Sony's $40 million outlay and should prove more than worth the studio's effort.

Finally, Viacom's The Wolf of Wall Street -- which unsurprisingly piqued the interest of our decidedly investor-centric crowd for a variety of awkward reasons -- could enjoy another so-so weekend after earning nearly $18.4 million in its debut. It remains to be seen how it'll hold up over the next three days, but suffice it to say Viacom could use a boost given the film's lofty $100 million production budget.

Things aren't expected to pick up much with next weekend's box office, either, as only two new wide releases arrive in the form of Comcast Universal's war drama, Lone Survivor, and Lionsgate's (NYSE:LGF-A) The Legend of Hercules.

Neither Lionsgate nor Comcast have released official budget numbers for their latest action dramas yet, but given their relative lack of hype and the fact each film is hitting well under 2,800 screens, it's safe to expect Hercules and Lone Survivor will end up modest successes, at best.