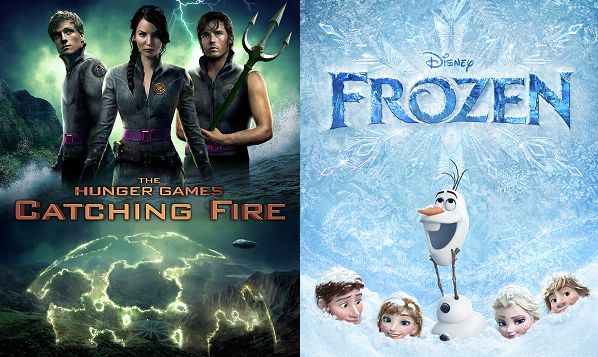 If you've ever wondered if there was room for two blockbuster films to thrive on the big screen at the same time, look no further than this weekend's box office results.

As if its record-setting November debut wasn't enough, Lionsgate's (LGF-A -4.73%) The Hunger Games: Catching Fire remained atop the box office heap with a $74.5 million second-weekend haul. That easily trounced the old $57.5 million Thanksgiving weekend record set 12 years ago by Harry Potter and the Sorcerer's Stone.

Frozen was red-hot, too

But that's not to say Catching Fire's "competition" performed badly, either. Disney's (DIS 3.51%) Frozen simultaneously set the new high mark for the largest-ever Thanksgiving weekend launch, bringing in $66.7 million during its debut. For some perspective, the previous record was set 14 years ago by Toy Story 2 -- a little over six years prior to Pixar's early 2006 acquisition by Disney -- which earned $57.4 million in its first three days.

As it stands, Frozen has already tallied a solid $110 million globally, and should have little trouble trouncing its $150 million production budget for Disney over the long run.

Then again, this shouldn't have come as a huge surprise. Remember, while Disney's animated holiday effort was admittedly expected to perform well, I wrote last Monday that I didn't "expect Frozen to have a significant negative effect on the performance of the comparatively thrilling, violent Catching Fire, which is primarily enabled by its largely young-adult target audience."

In short, I think these two big-budget hits were primarily able to succeed in tandem thanks to the fact they cater to disparate (albeit complementary) groups of lucrative movie-goers.

In other holdover news

Meanwhile, Disney Marvel's Thor: The Dark World earned another $11.1 million in its fourth domestic weekend, bringing its worldwide gross to a whopping $591.1 million. For reference, that's a 31% improvement so far over the first Thor's $449.3 million take in 2011.

Next, Comcast (CMCSA 0.07%) Universal's The Best Man Holiday continued its winning streak, grabbing another $8.5 million in its own third weekend and good for a total gross of $63.5 million. But don't let the small total fool you; the folks at Comcast should be more than happy considering they only forked out $17 million to bring this sequel to the big screen.

The only significant release in the coming weekend arrives in the form of Relativity Media's R-rated thriller, Out of the Furnace.

If anything, though, that should have have more of a negative impact on Open Road's Homefront than anything else, so there should be little standing in the way of continued box office domination from Lionsgate and Disney through Catching Fire and Frozen going forward -- that is, at least until the Dec. 13 release of Time Warner's (TWX) The Hobbit: The Desolation of Smaug.

By then, however, today's champions will have made the bulk of their money, and should have no problem relinquishing their crowns to Time Warner's worthy successor.