The biggest fast food-chains localize their menus overseas to suit local tastes. Here are some of the ways the big dogs of quick serve serve it up around the world and why.

Christmas buckets with a side of tree fungus
Emerging markets and international growth are common themes in fast-food earnings reports. India, Asia, and the Middle East are areas all the chains want to conquer. The bullish thesis on Yum! Brands (YUM 0.41%) was its spectacular Chinese success with KFC until the 2012 chicken supplier scandal.

Part of that success was due to localized menus. At Chinese KFCs, one can order tree fungus salad, a Dragon Twister chicken wrap with cucumber and duck sauce, or rice congee. In 2008, KFC added traditional Chinese street food, youtiao (like a doughnut) and shaobing (a sweet or salty flatbread).

Japan is an important market as they love both American fast food and localized offerings.  A Christmas bucket of KFC chicken is a holiday tradition and a holiday dinner including cake and bubbly sets a family back $40 American.

Meanwhile, McDonald's, no slouch, is introducing a retro American menu from cheese fries with bacon to a traditional American cheeseburger.

Where's the beef?
India is another huge market that fast food chains want to crack. KFC opened in India in 1995 and the Indian locations offer the most extensive vegetarian menu in KFC's global chain with items like a chickpea burger or hot chili and lemon-spiced wings. To underscore the importance of India, Yum! Brands recently split off KFC India as a separate division. Fellow Fool Mark Yagalla believes KFC has more potential in India than it does in China.

There is also no beef on the McDonald's menu in India. Instead, McDonald's offers plenty of chicken and vegetarian alternatives like vegetarian nuggets or a hot and spicy paneer wrap. For breakfast there is a veg McMuffin made with spinach and corn. The most interesting one is the McAloo Tikki, a potato and pea patty spiced Indian style.

Yum! Brands Pizza Hut division is all in with a Japanese pizza filled with shrimp and crab and a crust of fried shrimp. In Romania, the crown cheeseburger pizza is a hot item, so to speak.In the United Arab Emirates you can get a minted beef flatbread.

Who's growing global waistlines most?
Yum! Brands has 59 global Pizza Hut websites and 40,000 restaurants in 125 countries. Both McDonald's and Yum! Brands need global growth to offset their sluggish US sales. Yum! in particular needs to offset the year-long decline in Chinese KFC sales.

Over a year ago the company promised that the Chinese supplier problem was one that would soon rectify itself. The confidence of the Chinese consumer is hard-won though and sales haven't come back as quickly as hoped. Nonetheless, CEO David Novak said that China is still Yum!'s number one growth market and the company intends to stay the course. The company reported in November that Chinese same store sales had not slumped as much as analysts predicted, 5% vs 5.8%.

International revenue accounts for 68% of McDonald's 2012 revenue with Europe bringing in 39% of revenue and Asia Pacific, Middle East, and Africa, or APMEA, only providing 23% of 2012 revenue. McDonald's has plenty of room to expand in APMEA, especially Africa. Of concern is that McDonald's has had to close 74 of 3,170 locations in Japan.

Wendy's has plans for 8,000 restaurants outside the US and it currently has 6,500 total in 27 countries. Wendy's has the most room to expand overseas as you can see from the map.http://www.aboutwendys.com/International/ 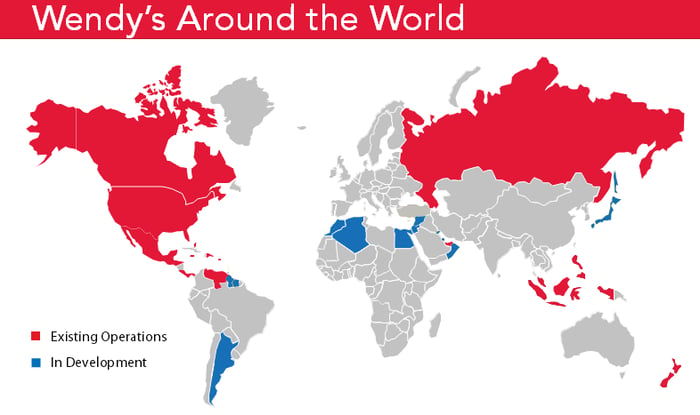 The accidental gourmet
It's just one foodie's opinion but lagging US sales show these companies could use some of these foreign treats stateside. That said, Yum! Brands' Chinese sales are slowly coming back and of the three it has the longest experience in far-flung fast food. Col. Harlan Sanders even visited some of the KFC locations in Japan as long ago as 1972.

McDonald's seems to be lagging with the huge head start that Yum! Brands already has in international logistics. Wendy's may just be the upstart with momentum and of course, a snow crab burger to die for, I'm sure.