Fast food giants have global reach these days and they customize some menu items for local tastes. Here are some of the craziest items from Dunkin' Donuts, Starbucks, Domino's Pizza, and Burger King that you can't get in the US.

A dozen seaweed doughnuts
It's not just America that runs on Dunkin'. Dunkin' Brands owns Baskin-Robbins and Dunkin Donuts and the company has been expanding worldwide. In China, a highly competitive market, Dunkin Donuts offers up a Dry Pork and Seaweed donut. This is a savory donut for breakfast. A curry beef donut is also available.

In Korea, kimchi (fermented cabbage, a ubiquitous foodstuff ) or lentil curry is stuffed into dough and fried into crisp and golden croquettes.To cool yourself down after the kimchi you can order a Grapefruit Koolatta.Throughout Asia Dunkin' also offers the Mochi Ring, a rice-flour doughnut sometimes flavored with green tea. In Singapore you have a choice between a seaweed cheese donut or a wasabi cheese donut. Pass me a Koolatta pronto! 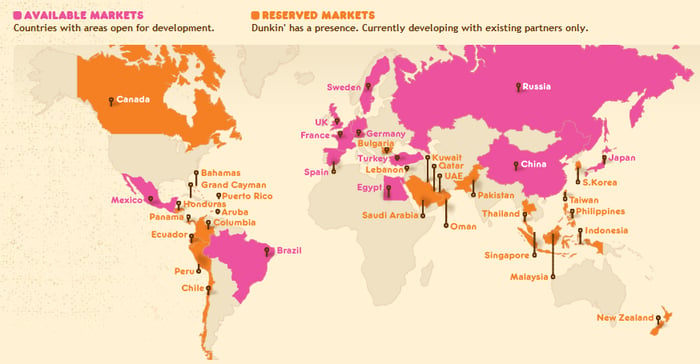 For holidays, Dunkin offers localized specials like its very pretty Spanish donuts which are prefaced by the greeting,"¡Merry Xmas, dunkinadictos!" Have no fear world travelers. Most Dunkin products can be ordered in English and not 'Fritalian' as the company's Oman website 'Fritalian' commercial humorously explains with a jab at rival Starbucks.

Anglophiles will delight in Bacon Butties, gammon sandwiches, mince pie, and the truly decadent and worthy of a US State Fair twizzle stick, marshmallows enrobed in chocolate and decorated with sprinkles or chocolate stars. Starbucks suggests dipping them in hot chocolate. In your face, Dunkin'!  Let us not forget their most recent contribution to fast-food oddities, the 'duffin', a raspberry jam filled donut/muffin.

In a nod to Japanese preferences you can get a coffee jelly Frappucino in Japan, featuring chunks of what else... coffee jelly. Wendy's also offers its own version in Japan in the form of a Frosty.

In South Korea search high and low for the Triple Cheese pizza. Camembert, Emmental, and Cheddar are layered between thin crusts and iced with potato mousse.

In India Domino's offers mostly vegetarian items like the Peppy Paneer Pizza, with paneer cheese and Indian spices. In honor of the Hindu religion you cannot get pepperoni at an Indian Domino's  but carnivores can partake of keema do pyazza ground lamb and onion topped pizzas.

Beanburger, beanburger, Pepsi, no Coke
In Singapore try a Burger King dessert turnover filled with taro chunks. In Jamaica you can order fish and bammies (Cassava flatbread ) with the local escoveitched sauce (like a Spanish ceviche lime marinade ).

In Argentina your Whopper is dressed with chimichurri hot sauce and provolone. A must-not-miss are Czech chili cheese nuggets and in Europe and Asia Burger King offers a vegetarian beanburger.

Who's winning the war for world domination?
Of these in ascending magnitude of ex-US 2012 sales are Dunkin' Donuts with $584 million, Starbucks with $2.2 billion, Domino's with $2.9 billion, and the surprising winner of Burger King with $6.2 billion. Burger King is dwarfed only by Kentucky Fried Chicken, owned by Yum! Brands, and McDonald's internationally.

Domino's may have the upper hand here with 30-years-plus international experience in 70 markets, 5,000 stores, and ambitious plans for expansion (see chart below). All of these stores are franchised and they contribute 52% of total retail sales with a five-year compound-annual retail sales growth rate of 12%. 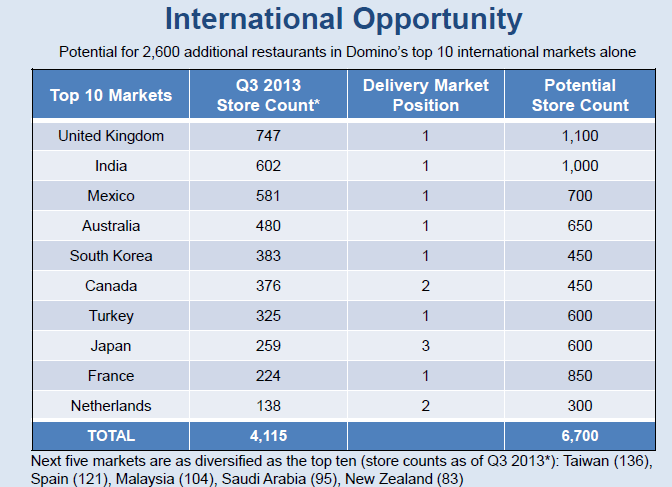 The takeaway on global takeaway
Numbers matter. The more global stores the more global sales which means that Burger King and Domino's are in enviable positions, especially Domino's with its rapid store growth rate. However, don't count out Starbucks as a major mover. These companies are growing by offering the foods their customers crave and they're well worth a try by visiting Americans.