Please ensure Javascript is enabled for purposes of website accessibility
Log In Help Join The Motley Fool
Free Article Join Over 1 Million Premium Members And Get More In-Depth Stock Guidance and Research
By Justin Loiseau - Jan 4, 2014 at 8:06AM

From a coal-cleaning company to the hottest electric-auto maker around, here are this Fool's three best stocks for 2013.

Last year was a good one for most investors, and my own portfolio was no exception. Here are my three top-performing stocks of 2013.

CECO Environmetal (CECE 1.36%) cleaned up in 2013 -- understandably, since it's in the clean air solutions business. Shares are up 60% as the company continued to snag new orders from different polluting industries around the globe.

Increasingly strict environmental standards (especially in the U.S. and China) put this company in position for more business in the years to come. And as natural gas prices continue to head higher, coal could be ready for a cleaner comeback with CECO Environmental by its side.

The company has beaten earnings estimates every quarter for the past three years, and its 1.2% dividend yield gives income investors slightly more incentive to stick around for the ride. With more than three decades of experience under its belt  CECO Environmental is ready to make the most of its global multi-sector offerings.

Zillow (ZG 2.61%) doesn't offer a dividend, but who needs one when shares are up 188% in 12 months' time? The company is edging its way to mid-cap territory with a market cap of $3.2 billion, but this growth stock remains a riskier investment than most.

Zillow isn't changing the real estate industry -- it's creating a new one. Real estate has historically been a shady sector of secret deals and back-door commissions, but Zillow's online platform creates a transparent community for buyers and sellers alike to enjoy.

The company isn't alone in its online real estate endeavor. But it's shown that it can boost sales faster than old-timer Move (NASDAQ: MOVE), while keeping up with new entrants such as Trulia (NYSE: TRLA). 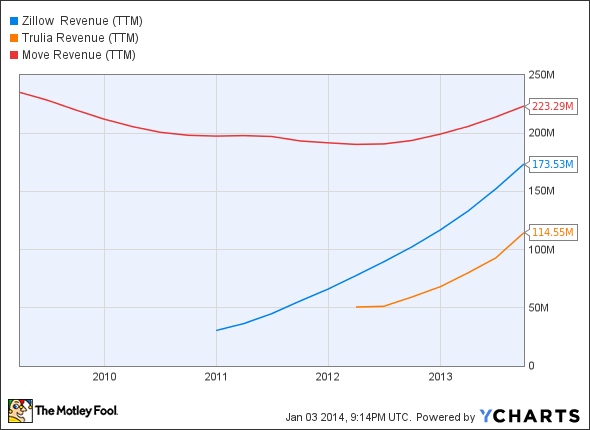 But as upward trajectories on this chart show, there may be plenty of growth for Move, Zillow, and Trulia. Unique visitors are up 64% year over year for Zillow, and its $174 million in sales is still just a fraction of the $10 billion real estate advertising market that's beating a steady path to online platforms.

With Zillow stock's hair-raising rise, I don't have plans to add on new shares anytime soon. But with my current holdings in the triple digits, I'm more than happy to sit back and see how my Zillow stock performs in 2014 and beyond.

But Tesla Motors was also a quadruple-bagger before three car fires cooled the frenzy of investors wanting to get in on this automaker's miraculous rise. And even at current valuations, it's easy to view Tesla stock as expensive. But for a company that'll finish out fiscal 2013 with $1.8 billion in sales when it pulled in just $117 million in fiscal 2010, numbers don't mean much.

Tesla Motors could change the auto industry forever, and it's that belief that keeps me holding on to my biggest winner in 2013. As a real-life reminder of why it pays to hang on, Motley Fool co-founder David Gardner recently celebrated a ridiculously enviable achievement -- his 1997 recommendation of Amazon.com became his first 100-bagger.

But along the way, Amazon.com shares soared to 30-bagger levels during the dot-com euphoria -- and dipped as low as double-bagger levels in the subsequent doom days. Amazon.com has forever changed the way we buy -- and I believe Tesla Motors will change the way we drive.

This year may be (and probably will be) a rougher ride than 2013, but I'm hanging on to Tesla Motors stock for the long term.

Fool contributor Justin Loiseau owns shares of Amazon.com, Ceco Environmental, Tesla Motors, and Zillow. The Motley Fool recommends and owns shares of Amazon.com, Tesla Motors, and Zillow. Try any of our Foolish newsletter services free for 30 days. We Fools don't all hold the same opinions, but we all believe that considering a diverse range of insights makes us better investors. The Motley Fool has a disclosure policy.