Kmart has performed well in this one aspect, but is it enough to compensate for this Sears company's subpar performance in another area?

Despite all the bad news and negative press, Sears Holdings (SHLDQ) is at least doing one thing right. Whoever is in charge of advertising for its Kmart brand should be considered for a raise. Without recent advertising strength, the Sears situation would be even more dismal. According to YouGov BrandIndex, Sears' ads have led to the company outperforming the sector for ad awareness over the past year. On the other hand, this doesn't necessarily lead to improved sales. Let's take a closer look.

Kmart outperforms its peers
BrandIndex rates a company's performance by giving it a score between 100 and negative 100. Of course, you want to see a company on the positive side.

For ad awareness, Kmart's score has ranged between +28 and +42 over the past year, with the company currently retaining a score near its peak. Kmart's ad awareness range over the past year is higher than the range for retailers in what BrandIndex calls the "big holiday chain sector" -- comprised of "18 of the most popular national retail chains as perceived by adults age 18 and over" -- which has delivered a scoring range of +18 to +28.

The strong Kmart performance for ad awareness has a lot to do with its viral "Ship My Pants" ad, which now has more than 20 million views. If you have yet to see it, then it might be worth your time:

All the above is the good news. Unfortunately, there is also bad news.

Kmart underperforms its peers
While ad awareness is important, it's not as important as value perception. If a retailer scores high for value perception, it indicates that more consumers will shop at its stores. This is especially the case today, when consumers are looking for value around every corner. And they won't stop looking until they find the value they seek.

For the past year, Kmart's value perception score has ranged between +4 and +14. At the time of this writing, Kmart is at +6. These numbers are on the positive side, which is a pleasant surprise. However, this range is still below that of its peers. For the past year, retailers in the big holiday chain sector have a scoring range between +14 and +16.

According to BrandIndex, back in November, Brian Sozzi, an equity analyst for Belus Capital Advisors, visited four Kmart stores in New York City and posted pictures that went viral. These pictures revealed empty shelves, disorganization, and dust. Though these pictures didn't impact Kmart's value perception score earlier in the year, they certainly didn't help late in the year.

Kmart and its parent company Sears still have a long way to go for a successful turnaround. You likely already know about declining sales and losses, but it all has to begin with value perception in today's consumer environment.

At this point in the article, you might be thinking: "Tell me something I don't already know. I'm not going to invest in Sears at this point in time." I understand, and you won't be left hanging.

There's another way to play recent value perception scores, but it's not as direct. One of the biggest scoring decreases for value perception over the past month belongs to Saks Fifth Avenue, which is owned by Hudson Bay. This is a potential negative for Hudson Bay, but it's a potential positive for its competitors, such as Nordstrom (JWN 24.79%) and Bloomingdale's, which is owned by Macy's (M 0.20%). When a company falters, it opens the door for market share gains for its peers.

If you happen to be pondering an investment in Gap, Nordstrom, or Macy's, first consider that they're all trading at fair valuations: 14, 16, and 15 times earnings, respectively. And they all pay dividends, currently yielding 2.10%, 2%, and 1.90%. Furthermore, they have all managed to show top-line growth in a challenging consumer environment over the past year: 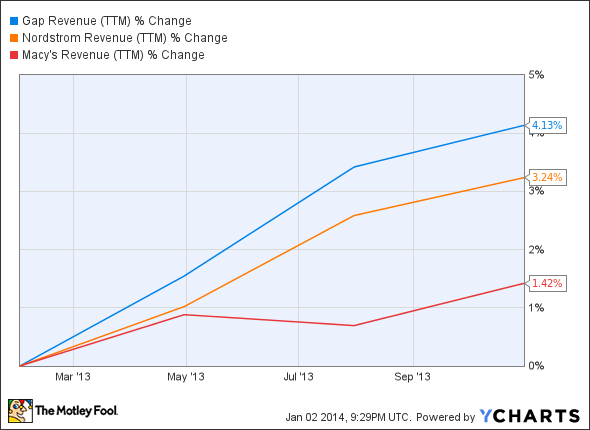 The Foolish takeaway
While I would trust the numbers above, keep in mind that there are many other factors to consider prior to making investment decisions. These results should be looked at as good starting points for Gap, Nordstrom, and Macy's. Furthermore, these numbers aren't an overall positive for Sears, but if Kmart continues to pump out viral ads, then there might be a glimmer of hope after all. However, it's still a long shot.