Oil produced out of the Bakken Shale in North Dakota might have a problem. It's possibly more flammable than oil produced elsewhere. Investors see that as a potential risk for the region's top oil producers like Continental Resources Inc (CLR 0.06%) as well as smaller Bakken focused producers like Kodiak Oil & Gas Corp (NYSE: KOG).

Last week's warning by the Pipeline and Hazardous Materials Safety Administration was made following a second explosive train derailment involving Bakken Shale oil. The warning caused the shares of Bakken Shale-focused producers to tumble as the following chart shows: 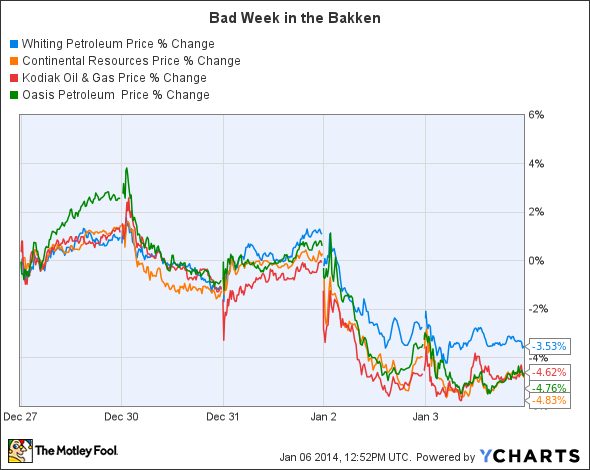 The sell-off shows that investors fear more restrictions could be placed on how Bakken oil is transported. This could potentially impact the profits as it could lower the price for oil that is produced from the region. While that is certainly a risk that bears watching, investors do need to realize that the risk does not impact all producers to the same degree.

The same can be said for Whiting Petroleum. It's focusing on finding more oil elsewhere in the U.S. and its next phase of growth will be coming from Colorado. However, it's not just stopping there as the company has accumulated acreage in three additional oil plays that could fuel more oil production growth elsewhere in the U.S. Bottom line, by diversifying away from the Bakken, both Whiting Petroleum and Continental Resources are reducing the risk associated with transporting Bakken oil.

On the other hand, companies like Kodiak Oil & Gas and Oasis Petroleum (OAS) are putting everything into the Bakken. Both companies spent heavily to bulk up in the Bakken last year with Oasis Petroleum spending more than $1.5 billion to grow its acreage position by 50%. These moves could backfire if the Bakken's oil starts selling at a discount because it's too hazardous to transport by train.

But is Bakken oil that risky?
While some investors appeared to see extra risk from Bakken oil, others don't see this as new information. Oil produced out of the Bakken is among the highest-quality crude oil available to refiners. It yields a higher percentage of high value refined products like gasoline than most other oils, while at the same time it has a much lower sulfur content.

In fact, Bakken oil is among the most valuable oil to refineries. According to a recent Continental Resources investor presentation, Bakken oil yields more gasoline and less fuel oil than any other oil. This is leading refiners to yield better returns by refining Bakken oil than nearly any other oil in the world. What this means is that Bakken oil should sell at a premium and not at a discount.

Investor takeaway
Clearly, there is more risk to Bakken-focused producers like Kodiak Oil & Gas and Oasis Petroleum if it becomes more difficult to transport Bakken oil. However, it is one of the best oil products in the world, suggesting that it's worth it to refiners to pay up for the oil. While that doesn't mean producers aren't in for a bumpy ride, it does suggest that these bumps should make for good long-term buying opportunities.

Fool contributor Matt DiLallo has no position in any stocks mentioned, and neither does The Motley Fool. Try any of our Foolish newsletter services free for 30 days. We Fools may not all hold the same opinions, but we all believe that considering a diverse range of insights makes us better investors. The Motley Fool has a disclosure policy.