The U.S. international trade deficit shrank to a four-year low in November, according to a Commerce Department report (link opens in PDF) released today.

The total deficit decreased 12.5%, to $34.3 billion, surpassing analyst expectations of a relatively steady $39.9 billion. This is the smallest deficit reading since October 2009.

Deficits improve in two ways: (1) exports increase more than imports, or (2) imports decrease more than exports. The first scenario is generally favored over the second, as it more directly shows signs of an internally strengthening economy. November's results show the best possible scenario, where exports increased 0.9% to $194.8 billion as imports shrank 1.5% to $229.1 billion. 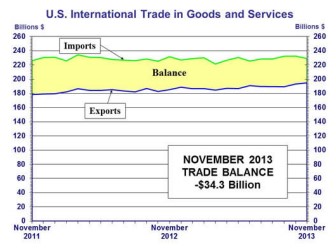 The services sector added on $200 million to reach a $19.7 billion surplus, while the goods deficit knocked $4.9 billion off to hit $53.9 billion. Industrial supplies provided the main push for improvement, with exports up $0.7 billion as imports dropped $4.3 billion.

Exports were aided by a 5.6% rise in petroleum exports while a decrease in demand for foreign oil offset a record level of imported autos.

Through 11 months of 2013, the trade deficit is 12.3% lower than the same period in 2012. Exports have strengthened, while imports are slightly lower.