Forest Labs has soared nearly 60% over the past 12 months despite concerns of the patent losses of its two top-selling products. What are 4 things investors should know about this company, and how will other companies, such as Eli Lilly, Pfizer, Johnson & Johnson, and Ironwood be affected?

Forest Laboratories (NYSE: FRX), the drugmaker best known for the Alzheimer's drug Namenda, is acquiring specialty pharmaceutical company Aptalis Holdings for $2.9 billion from TPG Biotech, according to Reuters. TPG originally acquired Aptalis for $1.3 billion in 2008 and merged it with Eurand Pharmaceuticals in 2011.

Forest will add Aptalis' cystic fibrosis and gastrointestinal drugs to its portfolio, considerably diversifying its products beyond Namenda, which accounts for nearly half of its top line.

Over the past year, Forest has been a polarizing stock. On the one hand, it lost patent protection for its blockbuster depression drug Lexapro in 2012, and faces the patent expiration of Namenda in 2015 -- two drugs that accounted for a whopping 85% of its revenue in 2011. On the other hand, those patent losses have forced Forest to diversify its portfolio and pursue other areas of growth.

Last quarter, its top- and bottom-line growth were impressive -- revenue climbed 14% year over year as earnings soared 237%. Investors have been impressed as well, and the stock has handily outperformed the overall market over the past 12 months. 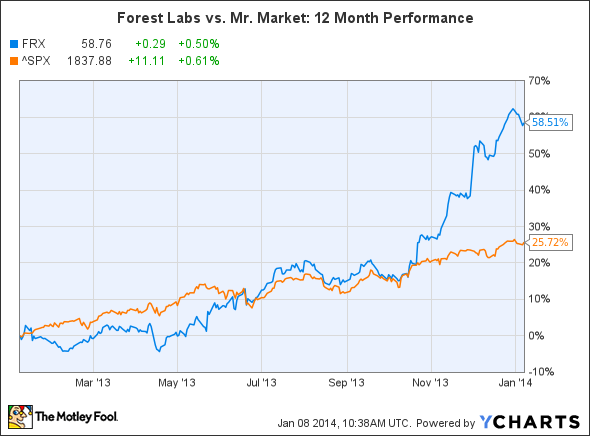 Let's take a closer look at what makes Forest tick, and four key things that investors should know about Forest Labs in 2014.

1. The Namenda dilemma
Forest's most important product is Namenda, a drug that keeps brain cells from deteriorating in moderate to severe Alzheimer's cases. The drug was originally created by Eli Lilly (LLY 1.20%).

Last quarter, sales of Namenda IR (instant release) climbed 7.8% year over year to $396 million, accounting for 49% of the company's top line. However, Namenda IR will go off patent in January 2015.

To cope with that upcoming loss, Forest launched Namenda XR (extended release), a higher dose, once-daily version of the original drug, in June 2013. The company hopes that it can convert 10% to 15% of its Namenda IR users to the XR version by April 2014 and 20% to 30% in the following 18 to 24 months.

However, the XR version hasn't gained much traction yet -- last quarter, sales of Namenda XR came in at $11.5 million, an 18% decline from the previous quarter.

Meanwhile, Forest has inked a deal with Adamas Pharmaceuticals to develop a fixed dose combination of Namenda XR and donepezil HCI (Pfizer (PFE -0.33%)/Eisai's Aricept), another Alzheimer's drug that treats the symptoms of memory loss and confusion. The combination drug is expected to hit the market in 2015.

2. Next-generation Alzheimer's drugs could render Namenda obsolete
Another longer-term concern for Forest investors is that Namenda and Aricept merely treat the symptoms of Alzheimer's, and could eventually be rendered obsolete by newer treatments that actually target the root causes of the disease.

Over the past few years, companies like Eli Lilly, Johnson & Johnson (JNJ 0.08%), and Pfizer have tried to treat Alzheimer's by clearing out brain plaques known as beta amyloids. Yet the beta amyloid endeavor has been a costly and fruitless one, which has prompted researchers to start thinking outside of the box.

New experimental treatments such as Novo Nordisk's diabetes drug Victoza, blood pressure drugs, and a new research agreement between J&J and Evotec to study small molecule treatments could all yield promising results that could ideally reduce the need for older drugs like Namenda and Aricept.

3. The Lexapro problem
While the fate of Namenda remains a top concern for investors, Forest is also struggling with the patent expiration of its depression and anxiety drug Lexapro in March 2012.

Last quarter, sales of the former blockbuster, which generated sales of $2.3 billion in 2011, fell 51.4% year over year to $21.7 million. That plunge was attributed to Teva Pharmaceutical and Mylan, which both manufacture generic versions of Lexapro.

Yet the good news is that those losses will eventually bottom out, just as Pfizer's Lipitor did after its patent expiration in 2011, so the loss of Lexapro shouldn't be a major issue for new investors.

These four drugs, which together account for 27% of Forest's top line, should become increasingly relevant over the next few quarters as sales of Namenda IR top out and sales of Lexapro continue falling.

Investors should also pay attention to Linzess, a gastrointestinal disorder drug that was launched in the U.S. at the end of 2012. The drug, which was developed with Ironwood Pharmaceuticals (IRWD 2.51%), only generated $34.4 million in sales last quarter for Forest, but analysts believe that the drug could eventually hit peak sales of $2 billion.

Last but not least, Forest's new antidepressant, Fetzima, was approved by the FDA in July 2013 for major depressive disorders (MDD). The drug, which was developed with Pierre Labre Laboratories, was launched in December, and is expected to hit peak sales of $187 million by 2020 -- not a blockbuster by any means, but still a welcome second depression medication to complement Forest's own Viibryd.

The Foolish takeaway
Forest has some robust catalysts for growth for investors willing to look past the near-term challenges of Namenda and Lexapro.

Forest's acquisition of Aptalis now decreases its dependence on Namenda and stabilizes the company's long-term growth. Moreover, the stock trades with a forward P/E of 20.8 and a five-year PEG ratio of 0.98 -- indicating that both investors and analysts expect the stock to continue rising.

Fool contributor Leo Sun has no position in any stocks mentioned. The Motley Fool recommends and owns shares of Johnson & Johnson. We Fools may not all hold the same opinions, but we all believe that considering a diverse range of insights makes us better investors. The Motley Fool has a disclosure policy.