Eli Lilly missed the 2013 rally that propelled big pharma stocks like Pfizer and AstraZeneca. Can this company beat the patent cliff in the long term and turn things around for disappointed investors?

The patent cliff hammered big pharma companies across the industry in 2013, but 2014 is the year of reckoning for Eli Lilly (LLY 0.60%) and its investors. Eli Lilly's already been hit with one major patent expiration as leading drug Cymbalta lost protection last year, but it's not the only important therapy in the company's portfolio going off-patent soon. Osteoperosis drug Evista is also on track to lose patent protection in 2014, and Eli Lilly's acknowledged that a big financial hit is on the way this year.

But does this much-maligned stock have a hidden upside? While investors abandon Eli Lilly in light of the patent cliff's withering blows, let's take a look and see whether long-term investors can make the most of this beaten-down pick.

How bad could Eli Lilly's 2014 get?
It's true that Eli Lilly is facing a monumental uphill battle this year. The company released its earnings guidance for 2014 on Tuesday, and it's anything but an optimistic forecast: Eli Lilly projects that, even on the high end of its revenue guidance, sales in 2014 will fall by up to 18% from 2013 levels, with earnings taking an even more precipitous drop. That's due mostly to Cymbalta's free-fall from around $5 billion in full-year sales in 2012 -- and likely more for the full year 2013 -- to less than $2 billion in 2014, according to most analyst estimates.

We saw last year how badly the patent cliff can slam companies -- even if their stock prices haven't reflected it. Pfizer's (PFE -0.39%) loss of patent protection on former top-selling drug Lipitor has been the major reason for the company's nearly 7% year-over-year decline in revenue over the first nine months of the year. While Pfizer's pushed past Lipitor's nearly 50% fall with a number of promising, up-and-coming drugs, other rivals, such as AstraZeneca (AZN 1.21%), haven't been so lucky. Patent losses helped push AstraZeneca's second-quarter earnings down 12% last summer and have the company on track for a dour future, desperately searching for acquisitions to boost its pipeline and salvage its future performance.

However, Eli Lilly's stock has hardly been the model of market growth recently. Many big pharma stocks have soared over the past year, but Eli Lilly's mere 3.1% gain over that time trails every other major stock in the industry -- even to the likes of AstraZeneca, which has come on strong over the past six months. 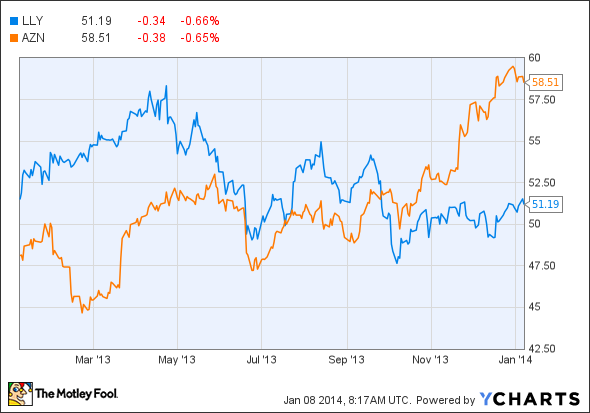 According to Motley Fool CAPS, Eli Lilly also falls behind the industry average in most valuations. Analysts have seen Eli Lilly's patent losses on Cymbalta and Evista coming for some time. While the stock will still likely take its lumps in 2014, there's reason for optimism that Eli Lilly can bounce back from this major hurdle in the latter half of the decade.

Hope in the portfolio and the pipeline
Eli Lilly's set to face generic competition of its second best-selling drug, cancer therapy Alimta, in early 2017 -- but it's no guarantee just yet. The company is fighting for a method-of-use patent in court that could extend the patent life of the drug until 2022, with a decision expected sometime this year. It would be a major victory for Eli Lilly if the ruling went in its favor, considering that Alimta sold nearly $2 billion through the first nine months of 2013 alone and posted reasonable 4% sales growth in that time.

Fellow blockbuster Cialis continues to churn along for the company also, with strong 11% sales growth over the first nine months of 2013. Cialis is also set to face generic competition in 2017, but the drug is part of Eli Lilly's expectations that the company can return to growth in 2015 after the worst of Cymbalta's losses have come and gone.

It's the drug pipelines that get pharma investors excited about the future, however, and Eli Lilly has a few tricks up its sleeve in that department. Chief among developmental therapies is dulaglutide, Eli Lilly's therapy for type 2 diabetes. Duluaglutide's already posted strong results in phase 3 trials, and while the diabetes space is rife with competition, Bank of America Merrill Lynch sees dulaglutide as a potentially top-line competitor to Novo Nordisk's (NVO 1.10%) standout type 2 diabetes medication, Victoza. Novo Nordisk estimated peak sales of Victoza at more than $2.1 billion, and while dulaglutide is not expected to rack up that much in peak annual revenue, it could still be a big winner for Eli Lilly if it's approved by regulators, which could happen later this year.

Keep an eye on Eli Lilly
None of this says Eli Lilly's an immediate buy for any investor. Moreover, it's critical to take a measured approach to this troubled stock: Eli Lilly's likely to go through plenty of ups and downs (and probably more of the latter than the former) in 2014 as Cymbalta falls off its patent perch. However, with Eli Lilly missing out on most of the market's rally last year, this stock could be well set for long-term investors turned off by big pharma's stock gains in 2013. Eli Lilly is expecting growth to resume in 2015, and if top drugs like Cialis and Alimta and keep performing -- and the company's pipeline deliver -- this could be a steal of a stock down the road in 2014 for patient investors.