Sony and Nintendo recently surged on news that China had lifted a 13-year ban on gaming consoles. Here are 3 sobering reasons that show why it won’t really matter much.

China recently lifted a 13-year ban on gaming consoles, which was originally aimed at shielding youths from the "corrupting influence" of video games.

In response, shares of Sony (SONY -0.32%) and Nintendo (NTDOY 1.94%) surged on the prospects of expansion into the world's most populated nation. 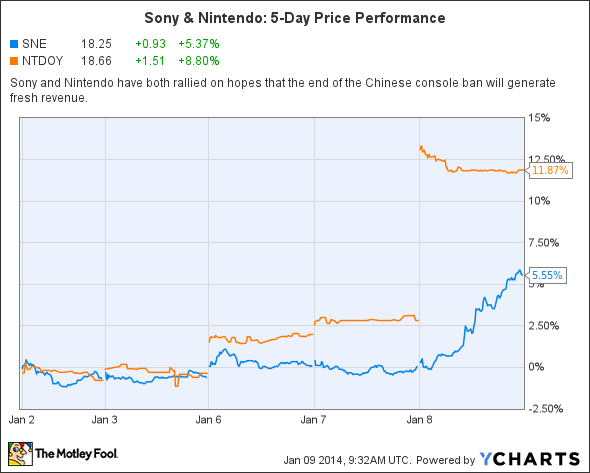 Sony stated that it intends to expand into China "when there is an opportunity," Nintendo is studying an expansion into the Shanghai free-trade zone, and Microsoft (MSFT -0.40%) has formed a $79 million joint gaming venture with BesTV New Media, a subsidiary of Shanghai Media Group.

While that eagerness might indicate that China will be the next great frontier for gaming consoles, investors and the media are overlooking three sobering problems that the companies will face.

Anyone who thinks that Sony, Nintendo, and Microsoft can simply stroll into China and start carving up a new giant market is sorely mistaken.

The ban on foreign consoles caused PCs to become the main way to play video games. As a result, China's domestic video game industry exploded, with companies like NetEase (NTES -5.97%), Changyou (NASDAQ: CYOU), and Perfect World (NASDAQ: PWRD) dominating the market with various MMOs. The size of the Chinese PC market, the largest in the world, jumped from $6 billion in 2011 to $13 billion in 2013.

To understand just how fast this market is growing, let's compare their top and bottom line growth from the most recent quarter to Western gaming giant Activision Blizzard (NASDAQ: ATVI).

It's easy to see just how much faster NetEase -- best known for popular domestic franchises like Fantasy Westward Journey, Westward Journey Online, and Tianxia -- is outgrowing its domestic and overseas rivals.

Activision, recognizing NetEase's dominance of the Chinese video game market, signed a licensing agreement with the company to distribute World of Warcraft and Starcraft II within mainland China. Gamers should also remember that Chinese Internet giant Tencent owns Riot Games, the developers of League of Legends, the most popular online game in the world.

Sony, Nintendo, and Microsoft will have a tough time convincing Chinese gamers to leave their PCs and mobile devices. In a previous article, I noted that PC gamers are the hardest group to convert to consoles -- only 10% and 8% of new PS4 and Xbox One buyers, respectively, came from PCs.

The level of anti-Japanese sentiment in China is currently higher than it was in Detroit in the 1980s.

Decades of foreign policy conflicts and unresolved hostilities from World War II have created a widening gap between the two economic powers. In 2012, a flare up over the territorial boundaries of the Diaoyutai/Senkaku Islands caused riots across China, in which Japanese automobiles, electronics, and toys were indiscriminately destroyed.

That blend of nationalism bleeding into consumerism created a fertile ground for western automakers such as General Motors, Ford, and Volkswagen to flourish instead.

This volatile social climate favors Microsoft, the only non-Japanese console maker. In addition, Microsoft already has an established reputation in the country with its Windows operating system and Office software suite.

Even so, Chinese consumers, like American ones, generally favor supporting domestic brands above overseas ones -- this can be seen in its massive PC gaming industry and its growing auto industry.

The last time I visited China in 2007, imported video game consoles and games were on sale at markets all over Beijing. In addition, these stores offer to illegally modify consoles for a small cost to play pirated games. Leading e-commerce sites like Alibaba's Taobao also sell imported consoles and games.

Despite China's iron-fist reputation for law enforcement, the government has bigger priorities than hunting down imported consoles. The only difference that officially lifting the console ban will make is that consoles will be legally available at larger electronics chains.

In other words, a lot of China's console sales have already been factored into the total units sold by the big three manufacturers. They were just officially reported as sales from Japan or North America, where the consoles were originally purchased.

More importantly, console makers either take a loss or make a very slim profit on consoles sold. If vendors are modifying consoles to play copied games, the software attach rate will be dismal when the numbers from China are officially calculated.

That's exactly why leading Chinese PC game publishers like NetEase use the microtransaction system in their games -- it's nearly immune to piracy.

It's easy to assume that the Chinese gaming market will gobble up the PS4, Xbox One, or Wii U once the government lets them into the country. Unfortunately, it will make very little impact on overall sales.

If any foreign console can actually crack the Chinese gaming market, I think that Valve's fragmented universe of Steam Machines, which blurs the lines between PCs and consoles, has the best overall chance.

What do you think, dear readers? Do Sony, Nintendo, and Microsoft have a chance at penetrating the saturated Chinese gaming market? Let me know in the comments section below!

Welcome to the next level