Few big pharma companies face as many challenges as Eli Lilly (LLY -1.02%) does this year. The company's blockbuster antidepressant drug Cymbalta, which generated sales of $4 billion in 2012 faces generic competition for the first time this year. And another $1 billion in sales goes up for grabs when Lilly's Evista loses patent protection in March.

Those high profile expirations will mean Lilly will have to rely more on its diabetes drugs and cost cutting to protect earnings this year. However stiff competition from diabetes drug makers AstraZeneca, (AZN 0.48%) Novo Nordisk, (NVO 1.72%) and Sanofi (SNY -1.77%) means there will plenty of obstacles to overcome for Lilly in 2014.

Competing for billions in the expanding diabetes market

Lilly is a long standing maker of insulin and related products for diabetes patients. Its Humalog is the company's third best selling drug and given that a larger, longer-living population is likely to significantly increase the global diabetes population beyond the 347 million currently diagnosed, the market opportunity is big.

But Lilly will have its hands full competing against other diabetes heavy-weights including AstraZeneca, Novo, and Sanofi. Projections peg the diabetes market opportunity will climb from $113 billion to $336 billion in the U.S. over the next 20 years alone and that has all four companies angling pipelines toward new treatments.

Just this past week AstraZeneca won approval for its new SGLT-2 class drug for type 2 diabetes. Analysts think Farxiga, also known by its generic name dapagliflozin, could eventually reach peak sales of up to $1.5 billion by 2018. Farxiga joins Astra's other diabetes drugs Onglyza, Kombiglyze, and Byetta, as part of a robust franchise that was created by Astra's acquisition in December of the half of its diabetes partnership that was previously owned by Bristol-Myers.

Novo has six drugs filed or in phase 3 trials for diabetes that it hopes will solidify its 27% market share in diabetes treatment. The company's synthetic insulin continues to win business globally and despite being dealt a blow in early 2013 when the FDA opted against its Tresiba, Novo thinks it has plenty of opportunity to build upon the success of its market leading GLP-1 diabetes drug Victoza.

Sanofi is vying for a share of Victoza's GLP-1 business with Lyxumia, which its selling in Europe. The company announced in September its slowing its pace toward an FDA filing for approval while it waits for additional phase 3 data. If that data is strong, Lyxumia would complement Sanofi's blockbuster diabetes drug Lantus, which had sales of $638 million during the third quarter.

All four of the competitors are profitable, with Novo boasting the best operating margins at 38%. Lilly's margin has stabilized from its late 2012 lows and climbed to 27% in the third quarter thanks to pricing and cost cutting. 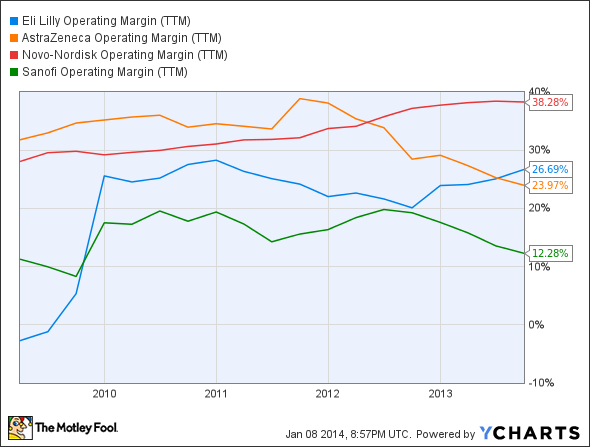 Lilly hopes bigger margin will help blunt some of the pain from Cymbalta and Evista patent losses.

The company issued guidance calling for total 2014 sales of $19.2 billion to $19.8 billion in early January. But that guidance fell short of prior guidance in October for a minimum of $20 billion in sales. That has analysts ratcheting down their earnings outlook for 2014. Currently, the street expects Lilly's earnings to fall from $4.14 in 2013 to $2.78 per share this year.

That's got investors in wait-and-see mode. They're paying less for each dollar of Lilly's sales than they are for AstraZeneca, Novo, and Sanofi's sales. And despite the move up in margin, the drop off in earnings means Lilly's forward P/E ratio may be a bit rich at 18 times. That's higher than it's been in the past and much higher than Sanofi's 10 times multiple.

Despite the upcoming year's struggles, Lilly still has steady earners in its lung cancer drug Alimta, which had sales just shy of $2 billion in the first three quarters of 2013,  and Humalog, which saw sales grow 6% in the first nine months to nearly $1.9 billion. ADHD drug Strattera and cardiovascular drug Effient were the company's two fastest growing drugs in the third quarter, growing 19% and 14% year-over-year, respectively.

Preserving earnings power through cost cutting and buybacks appears to be the focus for Lilly in 2014. The company is slashing its R&D budget by a billion dollars and announced plans in October for up to $5 billion in buybacks over time.

Lilly hopes that will help it transition to a new stage of growth as its pipeline matures. The company has 13 drugs in phase 3 and another 26 in phase 2, suggesting plenty of potential trial data to chew on over the coming year or two.

Drugs that investors should be on the lookout for news on this year include dulaglutide, a type 2 diabetes treatment, ramucirumab for gastric cancer, and necitumumab for non-small cell lung cancer. A bit further out, investors should watch ixekizumab. That drug has been promising in mid stage trials as a treatment for blockbuster autoimmune disease psoriasis. Lilly is studying the drug head-to-head with Amgen's Enbrel, a drug that racked up $8 billion in sales during 2012. If Lilly can successfully navigate 2014 it will emerge as a leaner and more profitable company, potentially setting it up to deliver much faster earnings growth in 2015 and beyond.

Todd Campbell has no position in any stocks mentioned.  Todd owns E.B. Capital Markets, LLC.  E.B. Capital's clients may or may not have positions in the companies mentioned.  Todd also owns Gundalow Advisor's, LLC.  Gundalow's clients do not have positions in the companies mentioned.  The Motley Fool has no position in any of the stocks mentioned. We Fools may not all hold the same opinions, but we all believe that considering a diverse range of insights makes us better investors. The Motley Fool has a disclosure policy.