After nearly two years of flat to falling revenue, it's just plain difficult for Quest Diagnostics (NYSE:DGX) to get any positive attention, especially with the black cloud of reimbursement uncertainty hanging over its industry. To end the year, shares of BRCA test pioneers Myriad Genetics (NASDAQ:MYGN) were clobbered after a price readjustment from the Centers of Medicare and Medicade Services. The market has let shares of Quest fall to their lowest level in over two years. This could be an opportunity to pick up a great company at a very attractive price.

Valuation
The years ahead are certain to be difficult for diagnostic service providers operating mainly in the U.S., like Quest. A look at the company's P/E ratio relative to its peers shows the market has taken a particularly grim view of its future. 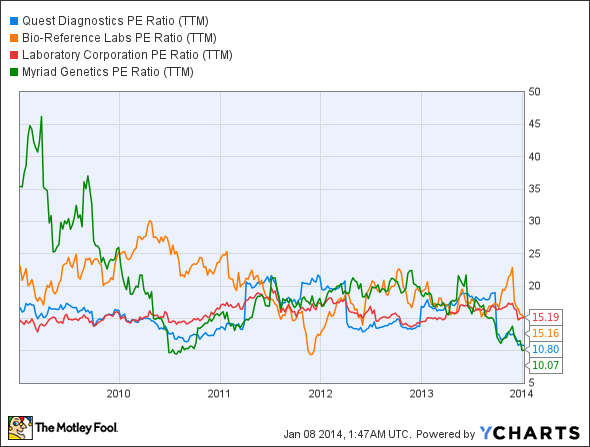 The Centers for Medicare & Medicaid Services recently confirmed a reimbursement reduction for BRCA testing. The reduction from $2,700 to $1,438 is sure to cut heavily into Myriad's sales which depend heavily on the diagnostic. It's surprising that Quest which has a far more diverse offering is trading at a multiple just above Myriad's. 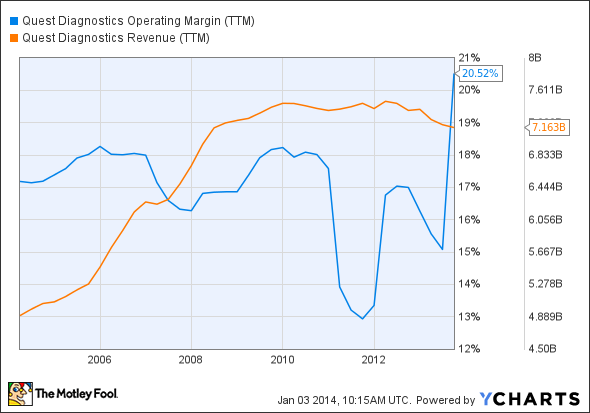 The recent operating margin spike above is somewhat misleading. In July 2013, Quest sold its rights to receive royalties from sales of ibrutinib for a pre-tax gain of $474 million. It's that one-time sale of royalty rights that boosted operating margin to a level it is not likely to reach again soon. 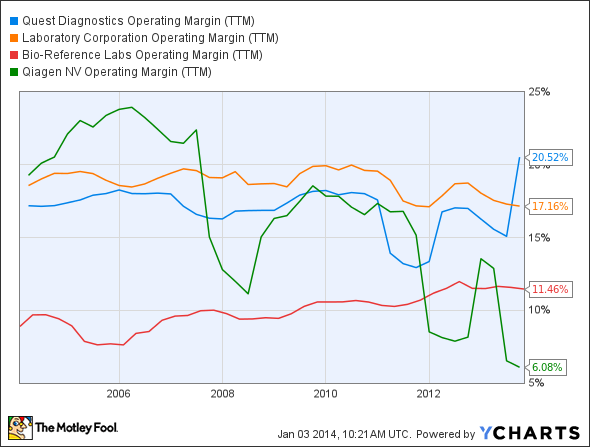 Joining the BRCA band
With a little help from celebrities like Angelina Jolie, Myriad Genetics has enjoyed a great deal of success with its BRCAnalysis test. This molecular diagnostic checks for specific mutations of the BRCA gene strongly associated with breast and ovarian cancer. Up until June 2013, Myriad's patent on the gene gave it a complete monopoly for an increasingly popular diagnostic with room to grow.

When the Supreme Court invalidated Myriad's claim to the gene itself, Quest and about half a dozen other diagnostic companies were ready. Now, a flurry of BRCA diagnostics are hitting the market. On December 10, Quest's unveiled its diagnostic at the San Antonio Breast Cancer Symposium.

What Quest's BRCAdvantage lacks in originality, it makes up for with promotion . Following the debut of BRCAdvantage, Quest co-hosted a panel discussion with senior medical correspondent for CNN, Elizabeth Cohen and "Decoding Annie Parker" director Joanna Rudnick. With over 2,100 patient service centers located across the US, it is certain to quickly gain share of a market hungry for access to BRCA testing. That is unless Myriad Genetics can win an injunction while suing Quest for patent infringement.

The Supreme Court ruling upheld some of Myriad's patents. Those upheld should be enough to keep Quest in the courts for years to come. While the BRCAdvantage test is likely to provide Quest with an overall revenue boost of up to a full percent in 2014, it could also come to a screeching halt.

Slow but steady
Quest's diverse range of diagnostic services, and locations make it far less susceptible to specific adjustments from major payers. Take for example Bio-Reference Laboratories (NASDAQ:BRLI.DL). On November 27, 2013, it warned that earnings would be about 27% lower than expected, largely due to reimbursement pressures. The company's share price instantly plummeted 22%.

On December 19, 2013, Bio-Reference labs posted record high quarterly revenues, but the bottom line was exactly where it warned it would be. During the call, the company explained at length the various reimbursement issues concerning the handful of areas it is largely concentrated in. Although management was confident that it will regain much of what was lost in the near future, investors have not been kind. Its price sank even lower and has not yet recovered.

Hit by similar reimbursement rate and fee schedule issues, Quest noted during its latest earnings call that it would experience a price erosion of about $200 million for 2013, or about 3% of annual revenue. Its wider diversification of operations, geography, and customers might keep it from attaining rapid growth. The same diversification also buffers the effects of changes in reimbursement policies and fee schedules from government payers and private insurers.

Increasing shareholder value
During the first 10 months of 2013, the company bought back about $1 billion of its shares. Impressive as that figure is, the company will continue to return profits to shareholders. It has another $1 billion lined up, for buybacks. At recent prices that would reduce outstanding shares by a further 12%-13%. At the beginning of 2013, the company upped its quarterly dividend by 76% to $0.30 per share. At recent prices that's a yield of about 2.2%.

Conclusion
Quest Diagnostics is an entrenched player in a viable industry with an exciting future. Despite reimbursement issues, it generates a great deal of cash that it is returning to shareholders, and using to acquire weaker competitors.

It might not experience the rapid growth that younger companies focused solely on companion and molecular diagnostics look forward to. It also isn't likely to get hammered every time private and government payers adjust their fee schedules. Eventually, downward pressure from third party payers will give way to real demand for the types of testing the company intends to provide.