My Foolish colleagues David and Matt recently received this question on their show Where the Money Is: 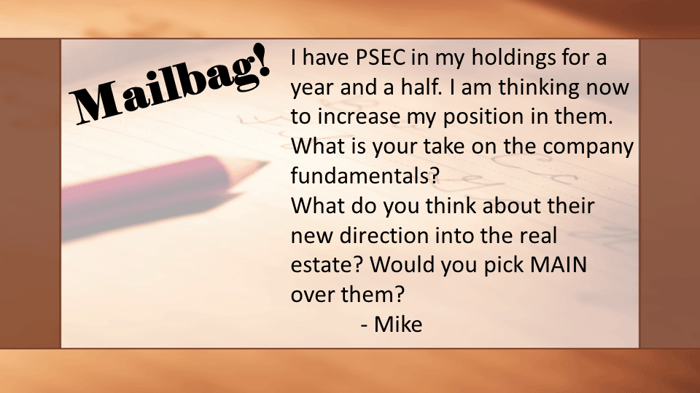 Mike, this is a great question. Prospect Capital (NASDAQ:PSEC) and Main Street Capital (NYSE:MAIN) are two of the best performing business development companies on the market today. Let's go line by line, and I'll explain how I'd approach this investing dilemma.

From the bottom up
Prospect Capital's fundamentals look great. The company has managed to increase dividends to shareholders and avoid serious capital losses in the six years since the financial crisis. In fact, not a single loan issued in the last six years by Prospect Capital is currently on non-accrual (underperforming).

Second, Prospect Capital is growing very, very quickly. In September 2011, Prospect Capital reported $1.7 billion in assets. Just two years later, that figure is up to nearly $4.8 billion. Including acquisitions following the recent quarter, assets will easily top $5 billion. Fast-growing financial companies can be worrisome, because defaults typically happen as loans age. So fast growth can "paper over" problems now and in the future.

The company's recent foray into real estate is no immediate reason for concern. Prospect Capital is a very opportunistic investor. The management team will go anywhere for returns and, in this case, Prospect Capital had an opportunity to buy real estate with favorable financing from Fannie Mae and Freddie Mac. Management seems happy with the potential for rising rental income and capital gains. Of course, this is a new venture -- it's still too early to tell.

While Main Street Capital's higher share price at 1.7 times book value might not be immediately appealing, over time, its lower cost structure should bode well for shareholders. The premium you pay for its shares will fall over time as lower costs play out.

Finally, I think Main Street Capital does a better job of aligning management with shareholders. Managers aren't paid for growing the asset base -- their salaries follow investment returns. And, most importantly, insiders own more than 7% of all shares outstanding.

All things considered, it's my opinion that Main Street Capital is a better buy now for someone who owns another BDC. I like the fact that you can get another income-producing stock while diversifying into a new name. Consider it a two-for-one special.