Mark Morelli
(Mathman6577)
Every so often, innovation has the ability to affect an entire industry, and even popular culture. Horse and buggy travel was made obsolete by the invention of the internal combustion engine and the mass production of the automobile. Passenger train travel was influenced by the airplane and the jet engine.
A few instances of this phenomenon have occurred more recently and might affect business going forward. Investors should be able to make a more informed judgment by paying attention to cutting-edge trends in disruptive innovation in the tech sector.
Tablet mania
The personal computer industry is in turmoil. Its downfall can be traced to a specific date in history and a brand new product category. On April 3, 2010, Apple(NASDAQ:AAPL) released the iPad. The upward trajectory in tablet shipments has coincided with a rapid decline in those of PC's. Tablet sales could top PC sales for the first time in 2015, according to one analysis.

Apple investors were rewarded, as the iPad has become the company's second best-selling product behind the iPhone, comprising nearly 18% of overall corporate revenue. Over 161 million devices were shipped in the 2011-2013 fiscal years. Apple has approximately 40% of the market right now.
Apple hasn't rested on its laurels, either. Over the last 3.5 years, the tech giant has upgraded the iPad several times with faster processors, higher resolution displays, a smaller version, more memory, and larger capacity batteries. Higher TTM shipments have been reported each year. The iPad showed up on one analyst's list of the top 12 tech products over the last two decades. Rumors have it that an iPad Pro, targeted for high-end users, will be released later this year.
The iPhone has also gone though a yearly update cycle, and the device was made better each time. It has delighted scores of users, as the product exhibits a 90% retention rate. This bodes well for the future.
Shareholders shouldn't give up on Apple, in spite of its recent troubles.
The times are changing
One of the top players in the PC industry, Dell, recently went private after floundering for a number of years. Lack of viable alternative products to PC's probably had a lot to do with the decision.
Another leading manufacturer, Hewlett-Packard (NYSE:HPQ), has had to reinvent by expanding into business-to-business services such as outsourcing, and offering other products like data storage devices and printers, where it controls 40% of the market. PC hardware does not rank high in the company hierarchy anymore, and industry share there is projected to drop as lower-cost manufacturers take over.
The strategy may be paying off for investors as the stock price and EPS have appreciated even as revenue has slipped. Don't count out HP, either. 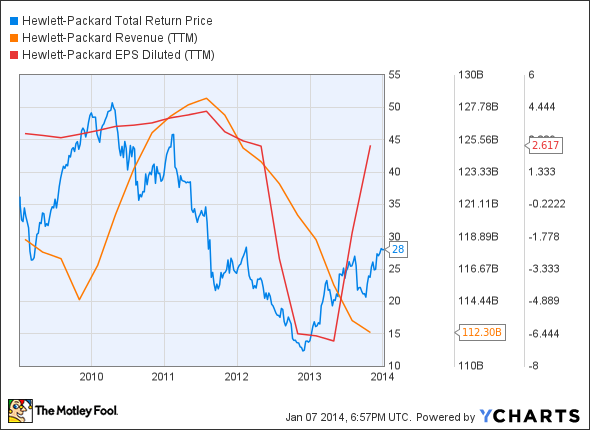 Turning it around
Standalone GPS device manufacturers had no competition in the turn-by-turn navigation market for over a decade, until Google and others added GPS capability to mobile maps apps.
Sales have been affected. One company, Garmin (NASDAQ:GRMN) has reported relatively flat revenue growth over the last four years and hasn't fully recovered from the 2008-2009 recession.
The upgrade cycle for new in-car GPS systems has slowed, and the the company has had to rely on markets in aircraft, marine, and outdoor navigation systems and fitness products to stabilize things.
Garmin may have life left now, but the long term is still still a bit cloudy for its in-car systems, as more people begin using smartphones as automotive navigational devices.
Foolish conclusion
Some tech inventions have turned entrenched industries upside down and affected investment decisions.
The tablet revolution, while helping Apple, has greatly affected the PC business and forced radical changes at companies like Dell and HP. The smartphone, running map apps containing turn-by-turn navigation capability, has affected stand-alone GPS manufacturers like Garmin, forcing companies to shift focus to other areas to stabilize business. The long term is a bit muddled and investors need to keep ahead of innovation disruption in order to profit.
This article represents the opinion of the writer, who may disagree with the “official” recommendation position of a Motley Fool premium advisory service. We’re motley! Questioning an investing thesis -- even one of our own -- helps us all think critically about investing and make decisions that help us become smarter, happier, and richer.