One of my favorite Warren Buffett quotations boils down the complex world of investing to one simple strategy: "Whether we're talking about socks or stocks, I like buying quality merchandise when it's marked down."

That's it. That's how easy it is to turn $40 into $10 million in a lifetime. Find high-quality products on the sale rack and hang on to them for years. Even a caveman could do that.

But what if your favorite brands are the ones that never seem to go on sale? With Buffett's advice in mind, let's take a look at a few retail and restaurant brands to see if we can find some discounts.

The cream of the crop
As far as household names go, the following companies are about as familiar as you'll find -- unless, in fact, you are a caveman. But even then, there's a chance that you've come across Costco Wholesale (NASDAQ:COST), Chipotle Mexican Grill (NYSE:CMG), and Whole Foods Market (NASDAQ:WFM) during your days spent foraging around town.

In my opinion, all three of these companies are the best of the best in their respective industries. I would venture to say each is the most fit for survival over the long haul in the retail, restaurant, and grocery businesses. Their focus on customers, deep understanding of their products, and high-caliber employees allow them to consistently outrun competitors in terms of growth.

Over the past few years, for example, Costco grew revenue at 10.5% compared to an industry average of 5.5%. Chipotle grew its top line at a hefty 21.6%, versus a 7.6% growth rate from its peers. And what about the green grocer? Whole Foods grew nearly six times as fast as its average competitor: 12.8% versus 2.2%.

Impressed? That's only part of the story. Each company's net income growth left that of their respective peers in the dust. 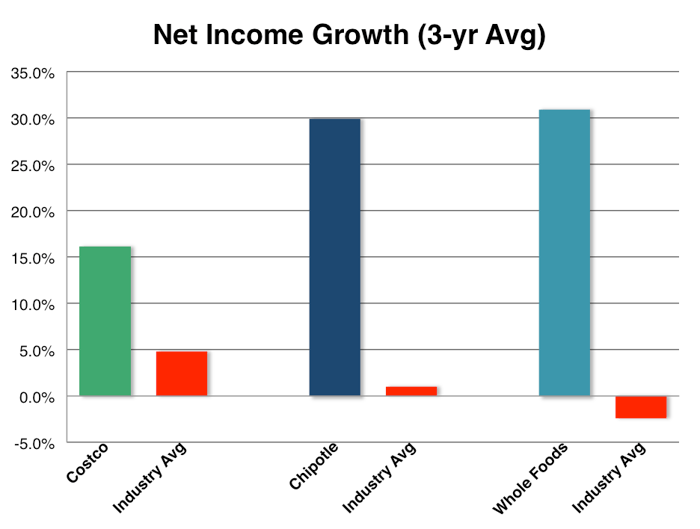 While growth is nothing if it's not sustainable, these companies have shown over the course of multiple decades that they have sound operational game plans. Executing on the visions of their founders, Costco, Chipotle, and Whole Foods seem to be the epitome of top-notch businesses worthy of our investment dollars.

However, the quality of the business is only half of the equation, right? We might have identified the best merchandise available, but finding a bargain entry point is a different story.

The best -- at what price?
With great companies like these, a lot of savvy investors hit a roadblock because the price never seems "right." By most traditional measures, we haven't seen a sale on these stocks since the recession, and who's to say when another one might come along?

For instance, a common metric that investors fixate on to compare stocks is the price-to-earnings ratio. The P/E ratio gives an estimate of bang-for-your-buck in terms of how much you'll pay for $1 of a given company's earnings. While the price-to-cash flow might be a better gauge, for our purposes the P/E works just fine. The P/E is more widely available for industry data and works well for companies with little debt and simple business models. So, with that, let's take a closer look at the P/E ratios for Costco, Chipotle, and Whole Foods over the past four years. 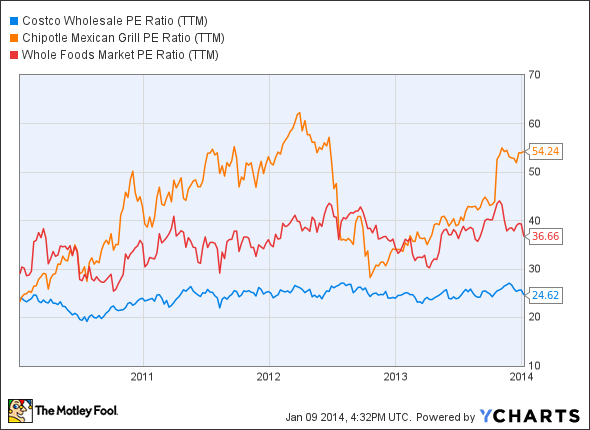 As shown, not one of the P/E ratio trend lines hovered below 20 for any extended period of time. Costco dipped around that level in 2010, but quickly came up for air and remained around 25 for the next three years. This is striking.

First off, the broader stock market represented by the S&P 500 currently trades at a P/E multiple of 18.88. Even after its remarkable 26% gain over the past year, the market still looks cheaper (growth prospects aside) than all three companies did at any given point over the past four.

Second, investors looking to "buy on dips" never really saw an opportunity with Whole Foods or Costco over this time frame. Chipotle's lows on a P/E basis occurred in early 2010 and in the summer of 2012, but only for a relative bargain -- shares still traded at around 30 times earnings.

The last surprising element relates to the industries in which these companies operate. Each is a brick-and-mortar business at its core. Costco's online sales are picking up steam, but it still lagged behind sales of 16 other retailers as recently as 2012. For the most part, these are not the most easily scalable businesses. Without the promise of rampant growth, it's highly unusual to see these companies trading in a stratosphere typically reserved for the tech world.

Foolish takeaway
I know many investors who, as a result of these companies' lofty valuations, have shied away from pulling the trigger on them in recent years. Was it a savvy move, or are they waiting for a price that will never be "right"?

There's no true way to know. As long-term investors, we might have an opportunity to pounce when the market overreacts to a short-term earnings miss. For Fools, these opportunities are like an exclusive blowout sale at your favorite store -- that everyone else is missing out on!

But we might not have that opportunity. Either way, would we be better off buying a few shares, committing to a phenomenally well-run business and then hoping for an even better entry point down the road? Perhaps. The Motley Fool's co-founder Tom Gardner would say it's better to miss on the valuation side than to miss on the business side. I think Warren Buffett might agree. For these three companies, would you?

Will These Stocks Ever Go On Sale? @themotleyfool #stocks $CMG $WFM $COST Next Article
Current