Some things won't change much from 2013 to 2014. With that in mind, here are three predictions for the U.S. energy market and four investment suggestions.

Many pundits try predicting future changes. I prefer Jeff Bezos' approach: He once claimed he had no idea what would change in the future, but he was pretty confident about what wouldn't change. Things like customers wanting great prices and selection, a hassle-free online shopping experience, and helpful customer service. So, following Bezos' example, here are three things I think won't change in 2014 and some suggestions on how to make a buck off it.

No. 1: Oil and gas drillers will drill more and longer wells per unit of real estate
Which means drillers will need more so-called proppants for these more numerous and longer wells. Typically, sand is used. Since high quality fracking sand can cost as much as $120 a ton (up from $50 a ton in 2010), there's money to be made mining it. Of the fracking sand suppliers, I like Hi-Crush Partners (HCRS.Q). This company sits on a 33-year reserve of high-quality sand in Wisconsin and can ship the stuff to every major oil and gas play in the U.S.

Hi-Crush's finances and future look good. Hi-Crush grew its customer base from four to 25 over the past year, increased the volume of sand sold by 50% and decreased its production costs by 11%. Not surprisingly, earnings grew 21%. As the chart below shows, the price of the stock grew nicely as well. Distributions paid followed suit and it currently yields 5.5%. The company projects more of the same. 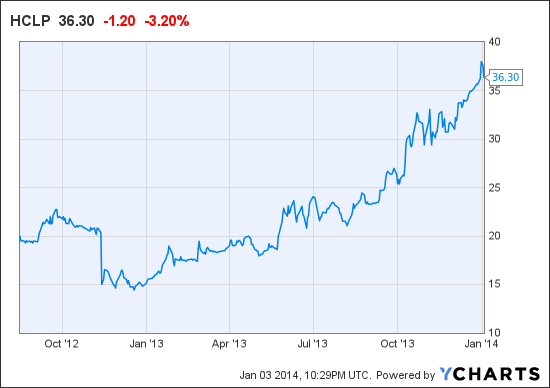 What will drive the future of the company? Certainly, the trend toward more proppant consumption by drillers. Hi-Crush settled a lawsuit and signed a new six-year contract with Baker Hughes. Hi-Crush made two acquisitions in 2013 and broadly hinted of more to come. Lastly, improvements in its rail facilities to accommodate more deliveries to more locations at a lower cost should add to Hi-Crush's growing earnings.

Clean Energy Fuels offers investors an investment in natural gas vehicles. The company operates a growing number of natural gas fueling stations across the U.S. for a growing variety of customers. Buses used in mass transit, trash trucks, and interstate tractor trailers have switched to natural gas as a fuel. Frito-Lay, UPS, and Wal-Mart now use natural gas fleet vehicles. Clean Energy supplies natural gas to literally thousands of vehicles every day, and that number will likely grow.

The company is not without problems. Clean Energy continues to report losses. The losses are shrinking, but they are still losses. Clean Energy faces competition in the form of Royal Dutch Shell and TravelCenters of America. TravelCenters agreed to build up to 100 natural gas fueling stations over the next several years. In perspective, Clean Energy operates roughly 150 stations today. Lastly, if natural gas prices rise too much, then the economics of natural gas hinders its expansion.

A safer bet would be a natural gas producer like Chesapeake Energy (CHKA.Q). The company seems to have shaken off the burden of its former CEO and to be truly turning around. This November, it reported earnings of $0.43 a share, up from $0.10 a share a year ago. Despite the growing production emphasis on oil, Chesapeake still cranks out natural gas. The recent rise in gas prices will only help the company.

The new CEO, Robert Douglas, laid out a corporate strategy to reduce debt and increase production of oil and natural gas liquids. So far, so good. During the latest earnings conference call, Douglas reiterated Chesapeake's intention of selling off non-core assets to bolster the balance sheet, improving oil production, and reducing production expenses. All told, Chesapeake believes it can increase production while reducing capital expenses. If the company pulls it off, investors should benefit nicely.

No. 3: Midstream companies will continue to outperform
Midstream companies offer one of the safest ways to invest in the U.S. energy market. Energy production continues to climb from established and emerging plays across the country. Someone has to move that energy from the field to the refiner or customer, and midstream companies do just that.

A turnaround story here is Energy Transfer Partners (ETP). For years, this company paid a steady distribution, but unlike other midstream companies, the distribution didn't grow. Until recently. The company announced an increase in its distribution from $0.89 a share to $0.905 a share. Not exactly earth-shaking, but, coupled with a 33% increase in the stock price, a reward for patient, if not long-suffering, investors.

The engines that drove the increased distributions and the cash flow that supported it were $19 billion in acquisitions over the past three years. The future holds more emphasis on moving oil and natural gas liquids on a fee-based model. Further, the company announced a deal with BG Group for LNG exports slated to begin in 2019. Yes, it's a ways off, but at least the company is planning for the future.

Final Foolish thoughts
Each of these companies offers investors a way to profit from what I believe are inevitable trends in the U.S. energy market. Of the three, I like Hi-Crush the best. It pays a 5.5% distribution, reports steady revenue growth, and supplies a critical product for hydraulic fracturing -- a winning combination.

Robert Zimmerman has no position in any stocks mentioned. The Motley Fool recommends Clean Energy Fuels. We Fools may not all hold the same opinions, but we all believe that considering a diverse range of insights makes us better investors. The Motley Fool has a disclosure policy.