Living without carbon based fuels, like oil and coal, has been nearly impossible since the turn of the 20th century. Automobiles are dependent on gasoline for fuel, natural gas and coal power most of the electric grid, and even most of our heating fuel is natural gas. But there are finally alternatives to carbon based energy sources and it's more realistic than ever to lower your personal CO2 emissions and go green today.

In fact, it may save you money to go green. Here's how you can go green and the companies who are making it possible.

Going solar pays
The cost of solar power has come down so far it's now being offered to residential customers for $0 down in many parts of the country. SolarCity (NASDAQ:SCTY.DL) is by far the largest residential solar installer and will install a small solar plant on your roof for $0 down and even save you money on your electricity bill. If you choose to build a big enough installation, the power generated can more than offset your entire electricity bill.

This is becoming big business and the competition is growing and becoming more competitive. SolarCity leads the way but SunPower (NASDAQ:SPWR) has similar offers to install its high efficiency panels and Sunrun and Clean Power Finance are offering leases through partners as well.

Net metering of solar power, or selling excess during the day when the sun is out and offsetting it with power usage at night, drives the residential solar market but it's becoming increasingly viable to store energy and use it when you array isn't generating power.

Storage is the future of energy
For solar or any other renewable power source to truly allow people to remove themselves from the grid, energy storage will have to play a big role. That's where there's been major progress in the past year.

SolarCity recently began offering a battery system to commercial partners who want to save some of their solar energy to offset peak demand. SunPower is also testing a number of battery systems and Solar Grid Storage is entering the market in areas with demand response and other revenue streams.

Today, you can generate enough solar power on your rooftop to have no net energy purchased from the grid, but energy storage will expand the opportunities to cut reliance on the grid without net metering. That'll be key to renewable energy long-term.

Replacing the gas pump
Where most of us notice our reliance on fossil fuels is at the pump. Gasoline made personal transportation ubiquitous and the world has become reliant on the fuel source. But technology has made all-electric vehicles a real option for consumers.

Tesla Motors (NASDAQ:TSLA) is leading the EV revolution, offering more performance and better range than anyone else in the industry. The Model S gets an EPA estimated 265 miles per charge and has performance in line with a BMW or Porche.

Nissan's Leaf and Toyota Rav4 EV are also all-electric and for those not ready to be bound to the range of their vehicles Ford and General Motors make hybrid electric vehicles. Before long, going with and electric vehicle will be a serious option for millions of people around the world.

This is big business
Going green has long been the dream of environmentalists, but it's capitalism that's driving the green revolution today. SunPower, SolarCity, and Tesla Motors have over $4 billion in combined revenue over the past year and that figure is growing by leaps and bounds. 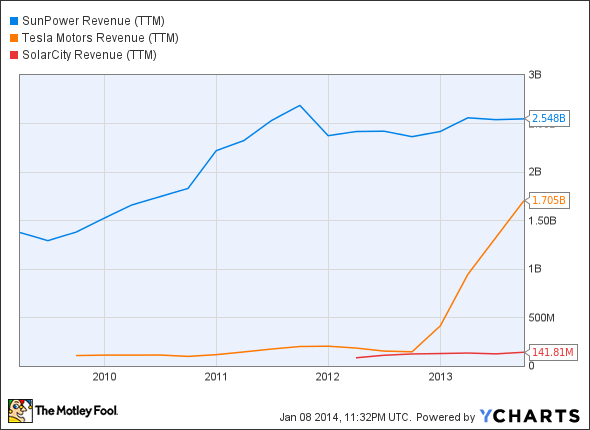 As costs come down and technology improves going green is a serious option to consider. It's only a matter of time before fossil fuels are a thing of the past.