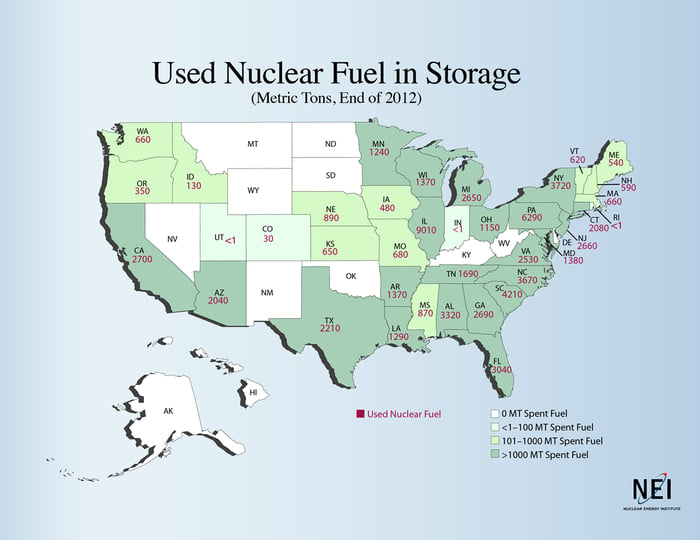 How much nuclear waste does your state hold? Source: Nuclear Energy Institute.

Innovation is synonymous with General Electric (NYSE:GE). Of course, you should expect nothing less from a company that traces its roots to Thomas Edison and is involved in industries ranging from energy to health care, industrial life sciences to financial services. In the past several years alone, the company has led the charge in creating ultra-efficient (and giant) wind turbines and sophisticated additive manufacturing, or 3-D printing, solutions.

Therefore, it should come as no surprise that General Electric has played a major role in creating novel solutions to a growing global problem: nuclear waste. While a collaboration with Hitachi (OTC:HTHIY), called GE Hitachi, has been providing creative technologies for the nuclear industry for more than 50 years, the invention with the greatest game-changing potential may have yet to arrive. In fact, it could make America safer by reducing nuclear storage by 96%, supply nearly 10% of the nation's electricity (in addition to the nearly 19% already supplied by nuclear energy), and provide long-term certainty for atomic-energy producers such as Exelon (NASDAQ:EXC) regarding waste storage and disposal.

However, to really appreciate the magnitude of the solution, we must first quantify America's nuclear waste stockpiles.

Nuclear waste by the numbers
Despite the ultra-clean safety profile of atomic energy compared with other energy sources, the growing problem of radioactive waste -- and its storage -- hasn't exactly boosted its public image. The average nuclear power plant produces 20 metric tons of used nuclear fuels, or UNFs, each year. Meanwhile, the entire American nuclear industry -- the world's largest -- generates more than 2,000 metric tons of UNFs annually and has generated more than 70,000 metric tons in the past 40 years. And we're far from the finish line: More than 120,000 metric tons of UNFs will be produced over the lifetime of currently operating American reactors.

That's a lot of nuclear waste. To put it in perspective, if fuel assemblies were laid end-to-end and stacked 21 feet tall, then 120,000 metric tons of UNFs would cover two football fields.

It's important to note that the economic consequences of waste disposal are largely overblown. Utility companies pay fees into the Nuclear Waste Fund for each kilowatt-hour of electricity produced from nuclear energy that covers the costs of disposal. The fund collects close to $750 million in fees each year and, at present, contains more than $26 billion (similar funds exist for decommissioning activities).

For instance, Exelon, which is the nation's largest nuclear-energy provider, has paid most of the fees for the state of Illinois. It should be no surprise that there is a strong correlation between the top five nuclear states and contributions to the fund:

Nonetheless, the current "best" solution for storing UNFs in geological repositories -- none of which is in planning -- until they decay to harmless products, a process that can take hundreds of thousands of years, is woefully inadequate and far from a long-term solution. Why not turn the problem into a solution that can benefit all of humanity?

Meet the Advanced Recycling Center
It may seem ridiculous to think any company could monetize something as hazardous and expensive as used nuclear fuel, but the Advanced Recycling Center, or ARC, isn't that ridiculous. In fact, it's based on technology that was first conjured up at Argonne National Laboratory 30 years ago. And we're not talking about a simple reprocessing technology. Instead, we're talking about a recycling technology that combines reprocessing with energy generation.

Consider that nuclear fuel waste can be broken down into three products: (1) uranium for reuse in power generation, (2) fission products for stabilization and geological storage, and (3) high-level waste known as transuranics, or elements heavier than uranium. While UNFs from a light water reactor (the most common type of nuclear reactor) yield about 95% uranium, 4% fission products, and 1% transuranics; traditional reprocessing leaves 20% of the original volume of waste behind to be stored in a geological repository. It would actually be a suitable solution (for now), but world reprocessing capacity is severely limited. Only 31% of the nuclear waste produced worldwide has been reprocessed, which has put generators such as Exelon in a bind for storage.

Enter the ARC. The creation from General Electric and Hitachi consumes all of the long-lived waste products (uranium and transuranics) of the original UNFs, or about 96% by volume. Fission products, the other 4%, will still be sent to geologic repositories for long-term storage but decay in a fraction of the time. At the heart of the ARC lies a 622 MW power block that consists of two Power Reactor Innovative Small Module, or PRISM, reactors. They're the first Generation IV reactors the industry has designed to date -- by comparison, the two new reactors at Southern's Plant Vogtle are "cutting-edge" Generation III units -- and are ready to be implemented for commercial use. The sodium-cooled reactors can operate at higher energies, and thus consume very heavy elements (transuranics) that plague the logistics of disposing UNFs. It's a giant leap forward for the nuclear industry.

Consider that a fleet of 26 ARCs could safely consume America's 120,000 metric tons of UNFs expected to be produced over the lifetime of the nation's nuclear fleet. In addition, the ARC armada would increase national carbon-free nuclear capacity by 50% and supply 10% of the nation's electricity -- a total that would top the nuclear capacity of every country except France.

For now, GE Hitachi is focusing its efforts on the United Kingdom and the Sellafield site in West Cumbria, which maintains the country's plutonium stockpiles. Since the energy density per volume of plutonium is much higher than that of uranium, a PRISM fleet at Sellafield could produce enough energy to power the United Kingdom for the next 100 years.

Yes, the entire country. Yes, for a full century.

What's the holdup?
While the PRISM reactor and ARC are ready for commercialization, it may take some time before they are implemented. Why? Nuclear waste is owned and regulated by international governments, rather than individual companies, which means the decision to build an ARC rests solely in the hands of our elected officials. I've proposed using a portion of the more than $26 billion in the Nuclear Waste Fund of the United States to help build an exploratory power plant to demonstrate the technology. The smaller size of the facility would allow for much cheaper capital costs compared with larger nuclear facilities currently being constructed. If it works -- and there's no reason to believe it won't -- we'll be on a truly sustainable path for the future of nuclear energy.

The problem of safely disposing UNFs requires cooperation on a national and international level. It's time that international governments awaken to new technologies that can effectively manage humanity's stockpiles of high-level wastes and reduce the threat of nuclear proliferation by more quickly consuming such fuels. I believe it's only a matter of time before the first PRISM reactor is constructed -- the United Kingdom is currently evaluating its options -- which would catapult General Electric and Hitachi to the forefront of not only nuclear energy technology, but nuclear energy generation, too. Given the amazing advantages of the ARC, the modularity of its PRISM power blocks, and the enormous global market opportunity awaiting a sustainable solution to nuclear waste; I would certainly keep my eye on developments surrounding the next-generation reactor.