Mortgage originations are expected to fall as much as 20% next year, and participation in the job market is at a 35-year low. How does this bode for Zillow and competitor Trulia? What does any of this have to do with LinkedIn?

According to the Wall Street Journal, the Mortgage Bankers Association is expected to cut its 2014 forecast for loan originations next week. Considering that the current forecast of $1.2 trillion is the lowest level in more than a decade, this is worth noting. Toss in the latest jobs number -- only 74,000 jobs created and tens of thousands more leaving the workforce -- and the resultant lowest rate of workforce participation in 35 years is startling. For investors in companies like Zillow (ZG 0.91%) and Trulia (NYSE: TRLA), is it time to move on before Mister Market takes away some pretty amazing gains over the past year?

Let's take a closer look at how LinkedIn (LNKD.DL) can give some insight into how these companies -- especially Zillow -- are primed for success, regardless of the mortgage or employment environments.

Strong growth for both 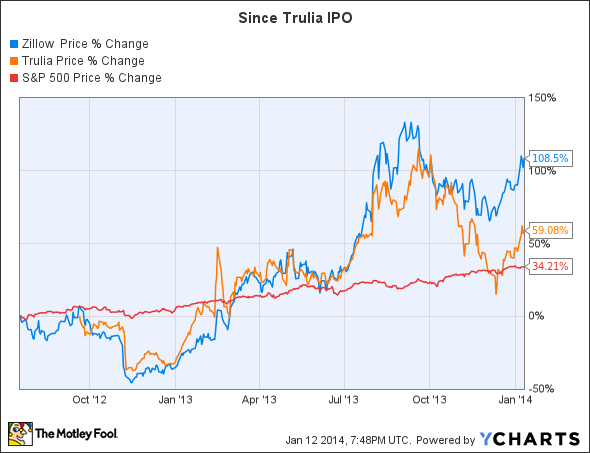 Measured since Trulia's IPO in 2012, Zillow has not only grown its share price 50 percentage points more than Trulia, its business has also surpassed its competitor to become the No. 1 real estate website in the U.S. It has largely done this through marketing to both consumers and real estate professionals.

Zillow's total revenue of $53.3 million was up 67% from last year, while Trulia's revenue number is a bit of a moving target due to the acquisition of Market Leader last August. GAAP revenue was $40.3 million, more than double 2013's Q3, continuing a pattern of nearly double last year's results. But, when normalized to account for Market Leader's sales both last year and for the first half of the quarter, sales of $48.1 million meant the pro forma growth rate of 59% -- still very strong -- is actually smaller than Zillow's.

A lack of these has plagued the U.S. for years. Source: Library of Congress

Zillow is also losing money, reporting a loss of $1.2 million in the quarter. However, management has committed to heavily investing in marketing to grow the brand and increase consumer awareness. The company planned to spend $40 million on marketing in 2013, and in a recent interview with Investor's Business Daily, CEO Spencer Rascoff said the company would spend "at least that much, if not more" in 2014. Trulia's numbers get a little fuzzy when it comes to profitability as well. Net income was $4 million for the quarter. However, management made it clear that when factoring in a full quarter of Market Leader results, it would have shown a loss of $5.4 million. If management can successfully integrate Market Leader into its portfolio without losing momentum, the company can probably return to profitability relatively quickly.

Zillow is targeting these in 2014

All about growth: getting stronger in mobile, rentals
So far, Zillow's investments have paid off in driving traffic. Trulia reported 35.3 million stand-alone unique monthly visitors, or MUV, in the quarter (up 42%), to Zillow's 61.1 million, up 69%. But, it's not just about traffic -- it's about the right kind of traffic. Rascoff went on to say that mobile is huge; mobile users are more likely to contact a real estate professional. 60% of Zillow's monthly users (36 million) are mobile, more than double Trulia's 15.8 million.

Zillow's August 2013 acquisition of StreetEasy could pack more punch than Trulia's Market Leader buy. StreetEasy does significant rental business, drawing more than 1 million MUVin New York City. Establishing tighter bonds with real estate professionals via Market Leader is important, but consumer awareness is what will drive long-term growth, especially in rentals. So far, it's the balance of both with which Zillow leads, making it similar to another website that puts people together: LinkedIn.

The power of the network effect
LinkedIn and Zillow have one thing in common: Connecting people with needs that match up. LinkedIn is able to help people looking for professional connections, while simultaneously connecting companies and recruiters looking for those same people. Similarly, Zillow (and Trulia) put people searching for homes in touch with people (owners and realtors) who are selling or renting. Connections with, and access to, mortgage professionals, builders, architects, plumbers, and a plethora of other individuals related to the industry add immense value for Zillow users.

This "network effect," the result of every new member adding value for more people, is the secret to the success of all of these companies. For LinkedIn, it has led to massive growth, as the third-quarter's sales of $393 million were 56% higher than 2012's Q3. LinkedIn also revised full-year revenue up to $1.5 billion. For Zillow, like LinkedIn, the value is nearly priceless.

Metrics that matter
For companies like these, growing at such high rates and investing cash in marketing and acquisitions, earnings isn't always the best metric with which to evaluate results. For these three, Free Cash Flow is a good metric: 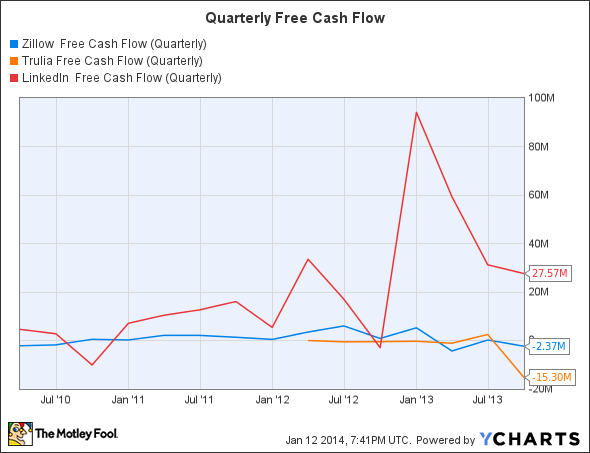 Even as it reports losses, LinkedIn generates more cash than it spends. Historically, Zillow has also been FCF positive, until committing to spend heavily on marketing in 2013 and 2014. With the exception of one quarter since its IPO, Trulia has consistently been FCF negative. This is an important metric to watch for all of these companies, as over time, it needs to trend higher into the positive.

Final thoughts: Gotta live somewhere
Much of the Mortgage Banker's Association's anticipated revision is a product of plummeting refinances. Its December forecast for 2014 actually projects both new home construction and purchase mortgages to climb this year. Either way, people need somewhere to live, and that bodes well, especially for Zillow. Just like LinkedIn, the strength of Zillow's network will only grow as more people use it. While Trulia is no slouch, Zillow's lead may be insurmountable.