Two investment banks square off in a battle of dividend fundamentals.

But few of us can invest in every single dividend-paying stock on the market, and even if we could, we're likely to find better gains by being selective. Today, two of the world's largest and most (in)famous investment banks will square off in a head-to-head battle.

Tale of the tape
Morgan Stanley (MS 0.90%) is one of the world's largest investment banks. Morgan Stanley currently ranks among top 100 companies on the global Fortune 1,000 list and has more than 60,000 employees as well as clients around the world. Morgan Stanley has a highly diversified service portfolio ranging from investment banking and assets management to financial advisory and commercial banking.

The bank borrowed over $100 billion from the Federal Reserve during the 2008 financial crisis, making it one of the largest private borrowers of federal funds in history.

Goldman Sachs (GS 0.84%) is the global leader when it comes to mergers and acquisitions advice and securities underwriting and is ranked 68th on the global Fortune 100 list. Goldman Sachs has been a focal point of anti-Wall-Street rage for several years, a testament to both its leading role in the financial industry and the abiding distrust most people have for massive, poorly understood financial businesses. Goldman Sachs became one of the Dow Jones Industrial Average's newest members, and its first noncommercial bank, last year. 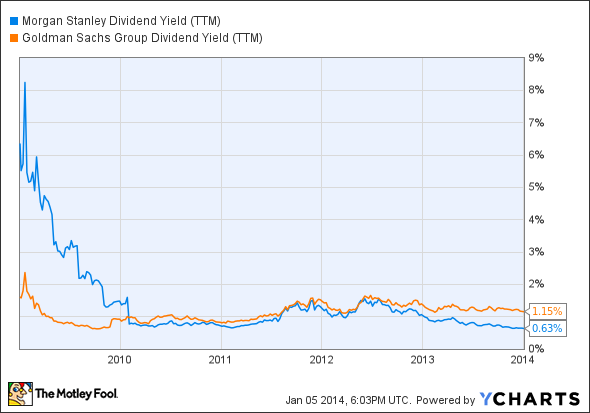 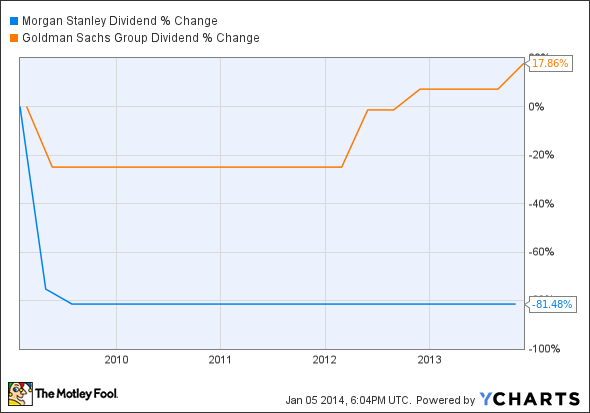 Round five: flexibility (free cash flow payout ratio)
A company that pays out too much of its earnings in dividends could be at risk of a cutback, particularly if business weakens. We want to see sustainable payouts, so lower is better: 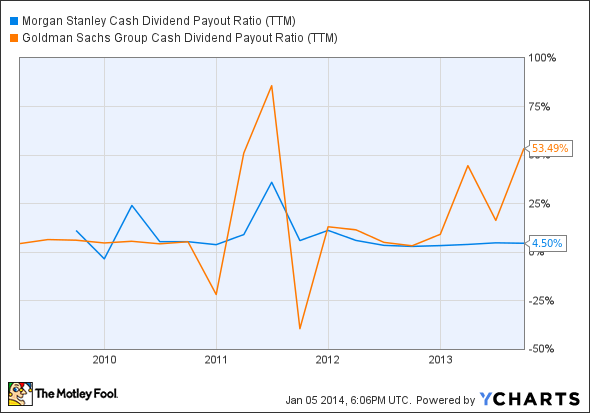 Bonus round: opportunities and threats
Goldman Sachs may have won the best-of-five comparison on the basis of its history, but investors should never base their decisions on past performance alone. Tomorrow might bring a far different business environment, so it's important to also examine each company's potential, whether it happens to be nearly boundless, or constrained too tightly for growth.

One dividend to rule them all
It seems Goldman Sachs has a better shot at long-term outperformance thanks to its substantial brand value. Although it has been plagued by many controversies over the past decade, Goldman has managed to continue leading its (shrinking) industry and has yet to be significantly affected by political or populist blowbacks.

On the other hand, Morgan Stanley seems to be scrambling, divesting a once-important part of its trading operations, and lagging behind its peer in terms of fundamental strength. Sluggish economic growth around the world has hindered both Goldman Sachs and Morgan Stanley, which may yet suffer a very real setback should the Volcker Rule be implemented.

No dividend is completely perfect, but Goldman's appears to have a brighter future.