With the success of Macau and Singapore as models, and the expected continuing growth of the casino industry in Asia over the next decade, casinos in the Philippines may be the next best bet.

Compared to Macau's whopping $38 billion in revenue last year, and Singapore's less triumphant but still incredible $6 billion, the Philippines gaming market may look small at its current $2 billion, according to data from Bloomberg. However, that is $2 billion from a market that has only just started.

Of the four licenses that have been offered by the Philippines government, only one casino has been operational thus far. The local joint venture headed by Bloomberry Resorts opened the Solaire Manila in March 2013, and has racked up $1.2 billion since then.

While Bloomberry is not listed on an American exchange, there is a way for U.S. investors to play in the new Philippines casinos. The awaited City of Dreams Manila resort, by Asian casino powerhouse Melco Crown Entertainment (NASDAQ:MPEL) in partnership with the richest Filipino national, Henry Sy, is set to open in the second half of 2014. This initial $1.3 billion dollar investment is in confidence that Manila will be one of the future gambling and resorts hubs of Asia and the world.

Melco Crown, operator of City of Dreams casino in Macau, has enjoyed a great year with 71% quarterly earnings growth over the same quarter last year. Though the stock is not cheap, trading at a current P/E multiple around 41, the company appears to have great short and long-term traction to increase earnings over the coming years.

The remaining two licenses have already been awarded: one to a Japanese venture, and the other to a partnership between a local investor and Malaysia's Genting, the same operator of Singapore's Resorts World Sentosa. The remaining two casinos by these companies are expected to be operational in two to four years.

The Philippines is poised for a strong start to their gaming industry. With a population of 98 million, more than 18 times that of Singapore, the Philippines would seem to have plenty of gambling clientele already. However, just as with Macau and Singapore, tourism and high rollers traveling from around the world is what will bring the most revenue. Fortunately, the Philippines has an already large and growing tourism industry with easy access to Manilla, as well as great beaches, making it a prime spot for a gambling vacation."Entertainment City" as the government has been calling it, is the Philippines response to the Las Vegas strip, a section of Manila Bay that is being renovated and built up just for this new gaming industry.

With four licenses, the Philippines casino industry could quickly surpass Singapore for second place gaming revenue generator in the region, competing with Macau and Singapore to attract gambling tourists from around the world looking for new and exciting gaming locations. Unfortunately for American investors, U.S. companies do not have bids for casinos in the Philippines yet. However, consider that Macau was fairly shut off as well until 2002, when the government saw the revenue they themselves were pulling in from the casinos, and granted six additional licenses to such companies as Sands, Wynn Resorts, and MGM Grand. The companies operating in Macau now will surely agree that the wait was worth the trouble. The same should be true with the Philippines. These American companies have bet big on Asia already, and their profits show that it has been successful. 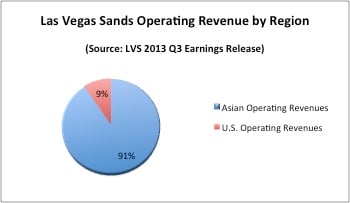 Las Vegas Sands (LVS -1.60%) reported in its most recent quarterly earnings release that it had earned $2.7 billion from Macau and Singapore operations, and just $282 million from U.S. operations in Las Vegas and Pennsylvania.

One of the incentives for companies to move into the Philippines has been the cost advantages associated with cheaper operations and lower taxes meaning higher margins. These tax rates apply to individual gamblers as well, who will flock to a country that's letting them keep more of their winnings. However, the Filipino government recently issued notice of higher than expected taxes on gaming. This small increase shouldn't derail the plan, so watch for fluctuations in tax rates in the Philippines that will, hopefully, lure the casino companies, and individual high rollers, to come.

Japan is another potential player in the chase for Asia's next gambling hub. Proposed legislation will be decided on in 2014 which would ease the government's ban on gaming, and offer licenses for casinos to begin building resorts in the country. The major players that could win from Japan opening up include Las Vegas Sands, Wynn Resorts (WYNN -0.96%) and MGM(MGM -1.62%), all of which (along with Melco) have said that they plan to invest in Japan immediately if they are allowed to in 2014. Wynn Resorts Development President Gamal Aziz stated in an interview in Tokyo in September that his company's investment in Japan, if possible, would be "way bigger" than the company's $4 billion Macau Cotai area project.

Melco Crown and other companies are poised to take advantage of a growing gaming industry in the Philippines. Even without a major American bet in the country right now, U.S. investors can still get in early, and keep watching for new changes.

Where Will Melco Resorts Stock Be In 5 Years?

Up 3% During a Rough Year, Is Melco Resorts Stock a Buy?

Why Melco Resorts Stock Was a Big Winner on Thursday
413%