Jay-Z has a thing or two to teach us about how we should look at stocks like Google, Zynga, and Microsoft, in order to make money.

Anyone considering a career in hip-hop would likely want to follow in the paths of legendary icon Jay-Z -- but he also has a few things to teach everyone about money and investing.

In a conversation with Steve Forbes, Jay-Z and Warren Buffett of Berkshire Hathaway sat down to discuss their lives, their businesses, and their surprising similarities. While Buffett had a wealth of insight on investing, Jay-Z had two tremendous pieces of advice as well.

Don't get caught up in the moment
When asked why Jay-Z didn't fade off into the sunset after an album or two like countless other artists before him, he said:

It's the discipline not to get caught up in the moment. You know, music is like stocks, too. There's the hot thing of the moment... People tend to make emotional decisions based on that. They don't stick with what they know... this is who I am. This is what I do.

Highlighting that music, like investing, requires discipline to not get caught up in the moment, and the thought of hitting it rich on the new hot thing.

So often investors can be lured into thinking one stock is the next big thing. Countless investors saw the success of Google (GOOGL -7.68%), and thought gaming company Zynga (ZNGA) of "Farmville" fame would be the next Internet mainstay. The New York Times even ran story titled "Will Zynga Become the Google of Games?" in July of 2010.

Yet, the two have gone on radically different paths since March of 2012, just four months after Zynga went public: 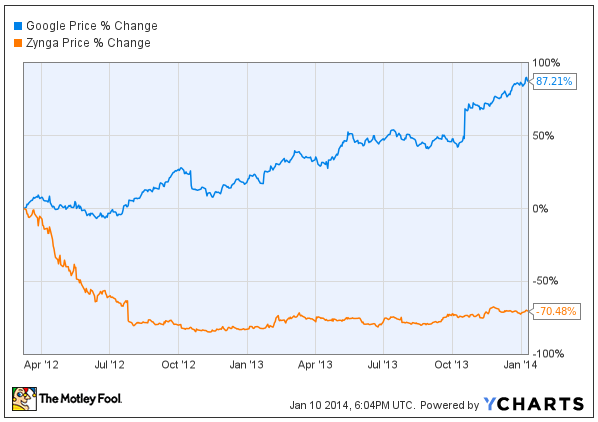 All too often, some hot trend dominates news headlines, water cooler conversations, and so much more, but the reality is, the best investments are often the ones that won't cause anyone to raise an eyebrow.

Although other things may be more exciting, sometimes the best investments are the boring ones.

Finding the truth
Along that same line, Warren Buffett noted that we should "see a stock not as something with a ticker symbol that wiggles around, but to think about it as part of a business. Don't get elated because something had gone up or depressed because it went down," as he highlighted the importance of diligent research to understand a company's actual value.

Jay-Z responded to that assertion by adding:

Because if you don't look at the tickers, you're really just searching for the truth within all the numbers and all the chaos. And that's the key to being a recording artist. You're telling your story or finding your truth at the moment.

All too often, investors are caught thinking they must blindly follow others, or they must time stocks by buying when they go up and selling when they go down. However, it's important to see that stocks are not just three or four letters thrown together with a price assigned to them, but instead are tangible businesses. And investors are buying pieces (however small) of those companies.

Money can be made in the stock market, but what it takes is diligent research and analysis as you "search for the truth within... all the chaos," like Jay-Z asserts. That's how individuals tell their stories in music, and that's how investors like Buffett find great values.

While many may not think of Jay-Z as a prolific investor, the reality is, we can all learn a thing or two about investing from him.

Plymouth REIT's "B" Game Looks Like a Winning Strategy
415%