Gap and Urban Outfitters have done well in a difficult retail environment and are delivering good value.

An investor-friendly management team often resorts to share buybacks to reduce the number of outstanding shares and boost the bottom line. If this is coupled with strong underlying fundamentals, then investors can expect the company's stock to perform well. Over the last five years, The Gap (GPS 5.44%), Urban Outfitters (URBN 8.10%), and American Eagle Outfitters (AEO 4.73%) have taken the buyback route to boost their earnings and return cash to shareholders. 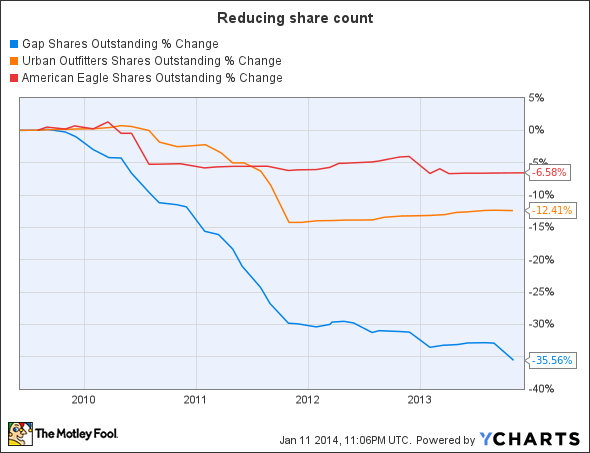 Gap is the most aggressive
Of the three companies above, Gap has been the most aggressive in buying back shares, which is why bulls never miss a chance to mention Gap's excellent track record of returning capital. Over the past five years, the company has bought back more than 35% of its outstanding shares.

In the previous quarter alone, Gap returned approximately $900 million through share repurchases and dividends. In addition, the company announced a new $1 billion share repurchase authorization during its third-quarter earnings call. Going forward, this should boost the bottom line further.

Gap's streak of positive results continued in the third quarter, and it reported impressive margin and same-store sales growth. This represented the seventh quarter of positive comps even in a challenging apparel retail environment. Gap's revenue increases 1% and earnings per share climbed 14% . This goes to show that Gap is winning over customers from other mall-based retailers who have also suffered at the hands of fast fashion, off-price, and online retailers.

Gap has managed to keep its head above the water by attracting shoppers with strong promotions and trendy merchandise. During the nine-month period of fiscal 2013, the company achieved top line growth of 6%, with comps up 3%. It has also delivered earnings-per-share growth of 29 %. This is a commendable achievement in a weak retail environment.

During the third quarter, the company repurchased and retired 300,000 common shares for $11 million, leaving 9.7 million shares available for repurchase under the current authorization plan. However, it still isn't close to Gap if we look at the five-year repurchase history, as shown in the chart above.

Urban reported a 12% increase in revenue as compared to the same quarter last year to a third-quarter record of $774 million . This was on the back of strong growth of the company's brands -- Anthropologie and Free People -- resulting in retail segment comps of a healthy 7%. In addition, it also performed well in the direct-to-customer sales channel, which grew on the back of an improved conversion rate of visitors, higher average order value, and an increase in visitors.

Urban also registered a 17.5% year-over-year gain in earnings per share, which is bound to increase further going forward as a result of the share repurchase program. During the current quarter , Urban's retail segment comps were up in the mid-single digits, which is good news for the company.

American Eagle in trouble
American Eagle, on the other hand, is struggling with declining comps and revenue. The comps for the third quarter declined 5% after a 7% decline in the second quarter. Looking ahead, management is projecting a mid-single digit decline in the upcoming fourth quarter. American Eagle is trying hard to turn around, but initiatives like international expansion and increasing the store count are going to take time to reflect favorably on the financial metrics of the company.

Currently, American Eagle's priority is to invest in growth as it tries to turn around. Share repurchases are not in the scheme of things right now, though the company will continue to evaluate the possibilities of a share buyback to offset dilution.

With limited resources at hand, however, it should stay focused on investing for growth. American Eagle is expecting to spend anywhere in between $230 to $250 million on capital expenditures as it tries to turn its fortunes around. The absence of an aggressive share repurchase program is reflected in the chart above, where outstanding shares have come down by just around 16% of what Gap has achieved.

Bottom line
Both Urban Outfitters and Gap have performed well in trying times. As a result, both companies have been able to carry out share repurchases, thereby delivering value to investors. On the other hand, American Eagle has been struggling and its turnaround will take time. Investors looking for an apparel stock that would return decent value over the long run should take a look at either Urban Outfitters or Gap.

Fool contributor Mukesh Baghel has no position in any stocks mentioned. The Motley Fool recommends Urban Outfitters. Try any of our Foolish newsletter services free for 30 days. We Fools may not all hold the same opinions, but we all believe that considering a diverse range of insights makes us better investors. The Motley Fool has a disclosure policy.