Four years removed from the bottom of the financial crisis, one number shows how far Bank of America has come.

There is one stunning reality that marks the change at Bank of America (BAC 1.10%) that often goes unnoticed, but is absolutely critical to see.

Bank of America's resolution plan to the Federal Reserve and FDIC -- which effectively outlines what the bank would do were it to go bankrupt -- offers charts, descriptions, and a host of other items that attempt to consolidate everything about the company into 34 pages. Yet there is one number that leaps off the page when Bank of America compares itself from where it was in 2009 to where it is now.

$261 billion
Bank of America highlighted four strategic initiatives over the last four years: streamlining the company, building capital and liquidity, improving credit quality, and driving growth. The bank said it has made key progress in each, which has allowed it to strengthen itself as a company and become a more "streamlined and simplified" organization.

One of the most stunning ways it has done this is by cutting its long-term debt in half, from $523 billion at the end of 2009 to $262 billion at the end of June 2013. That reduction of more than a quarter of a trillion dollars represents an amount that is more than the debt held by Indonesia at the end of the second quarter, according to the World Bank. Said differently, Bank of America trimmed roughly the same amount of debt from its books than a country of 247 million people has outstanding.

This chart shows just how dramatic this reduction of B of A's debt footprint has been relative to banking peers Wells Fargo (WFC 0.94%), JPMorgan Chase (JPM 1.22%), and Citigroup (C 0.53%): 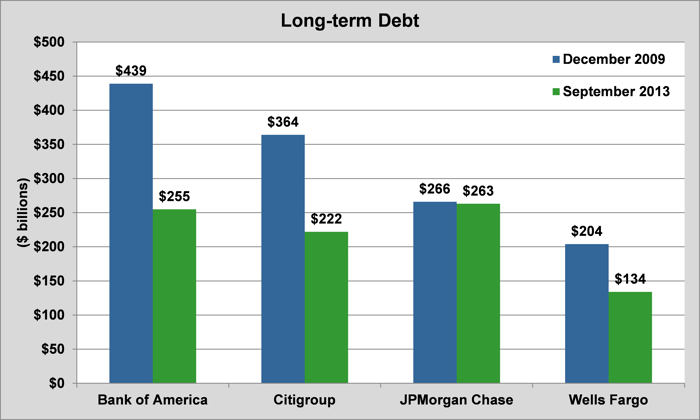 As you can see, JPMorgan Chase has actually kept its debt level relatively stable, and while Citigroup and Wells Fargo have also aggressively lessened their debt burdens, they cannot match the cutting done by Bank of America.

What it means
Bank of America has clearly now positioned itself in a much better place than where it was in the depths of the financial crisis in 2009. The conclusions from this are twofold. First, it principally helps the bank's bottom line. Consider that in 2009, Bank of America paid out $15.4 billion on that debt in interest expense, versus the $7.2 billion it has paid out over the last four quarters. This dramatically lighter debt burden benefits shareholders in a very tangible way, as the money that is freed up can go straight to the bank's bottom line.

In addition, this should help ease investors' concerns about possible risks posed by the bank. Consider that in 2009, costly, long-term debt financed 20% of its assets, while in the most recent quarter, that number now stands at 12%.

While banks certainly risk pose certain risks, these types of numbers provide further evidence that Bank of America is in a radically different place now than where it was in 2009. Investors should take note.