The cost to sequence a full human genome reached a critical milestone on Tuesday when Illumina announced its next-generation system will enable $1,000 tests. There are far-reaching implications for human health, but the possibilities extend beyond the doctor's office.

Life sciences instrument and DNA sequencing leader Illumina (ILMN 1.27%) announced Tuesday that it had achieved the long-awaited $1,000 threshold for sequencing a human genome. The breakthrough will be made possible by the company's new HiSeq X Ten Sequencing System and represents a massive improvement in cost reductions from the completion of the Human Genome Project in 2001. In fact, technological advances have led to such incredible gains in efficiency that the mighty Moore's Law had to be replaced by the Carlson Curve, named after noted author and entrepreneur Rob Carlson, who predicted the trend. It may be difficult to imagine, but sequencing a single human genome used to cost as much as $100 million. The dollar figure is largely a symbolic target and simply represents the next rung on a logarithmic scale, although it marks a giant leap compared to current sequencing costs that range from $3,000-$5,000 per human genome. Additionally, the sequencing system still won't be economical for smaller research labs or individual hospitals and doctor's offices. But make no mistake about it: A $1,000 genome paves the way for several incredible possibilities across multiple industries. Here are three ways DNA sequencing giants Illumina and Thermo Fisher Scientific (TMO 0.78%) will make the threshold relevant to your daily life -- and how companies from Solazyme to Inovio Pharmaceuticals (INO -5.88%) can cash in.

1. Large-scale population studies
The most apparent benefit to a $1,000 human genome is the ability to sequence more of them for less. That will not only stretch research budgets, but also enable larger population studies for acquiring genomic data. Scripps Health Chief Academic Officer Dr. Eric Topol said in the San Diego Union-Tribune that only 100,000 human genomes have been sequenced worldwide. That simply isn't enough to study genetic variations in global populations, which could uncover subtle relationships between gene groups and lead to novel therapeutics for a host of diseases.

Enter Illumina's HiSeq X Ten Sequencing System. Each system can process tens of thousands of human genomes per year. Considering that three systems have already been ordered for March delivery, it's possible that the world doubles the number of human genomes sequenced to date within the first year of operation. As we approach the million genome mark, we'll discover new ways to treat, cure, or prevent elusive diseases such as cancer, autism, and Alzheimer's. We'll also gain insights into the genetic relationships to intelligence, longevity, and health -- traits that can benefit all of Earth's inhabitants.

2. Cheaper bio-based fuels and chemicals
While DNA sequencing cost targets are reported in terms of a human genome, don't think advances aren't relevant for other life forms. Synthetic biology and industrial biotech companies such as Amyris and Solazyme that design microorganisms for producing fuels, cosmetics, food oils, and other industrial chemicals need to sequence smaller microbial genomes -- just in much larger volumes. Any improvements in sequencing costs for a human genome will increase the ease at which companies can build microbes and introduce newer, cheaper bio-based products or detect infectious pathogens in clinics and hospitals.

Life Technologies, soon to be a part of Thermo Fisher Scientific, made waves in the microbial genome sequencing realm several years ago with its Ion Torrent sequencing system. The instrument provided researchers, doctors, and engineers a way to quickly read the genetic code of smaller genomes and detect specific genes as never before. While many had hoped improvements would lead to a $1,000 human genome, Illumina beat Ion Torrent to the punch.

3. Promoting investment in DNA synthesis
Vastly different technologies are used to read DNA (sequencing) and write DNA (synthesizing), but the two are absolutely complementary. Just one problem: global reading capacity far outstrips writing capacity. But why do we need to write DNA, anyway? Creating novel industrial organisms or DNA-based therapeutics, such as the synthetic vaccines being developed at Inovio Pharmaceuticals, will require the capacity to manufacture large amounts of synthetic genes, which can be exact copies of those found in nature or enhanced versions from gene libraries. Inovio's synthetic vaccines are created by assembling base pairs of the information molecule to elicit an immune response, compared to existing vaccines that contain weakened viruses to do the same, and may be able to provide additional benefits and broader protection.

Simply put, cheap DNA synthesis is a necessity for tinkering with, fixing, and protecting genomes and human health.

How large is the gap? Consider that the cost to sequence DNA has fallen from $1 per unit of DNA in 1995 to an estimated $0.0000001 per unit of DNA at the end of 2013 -- before Illumina's latest milestone -- according to noted venture capitalist Steve Jurvetson. The ability to synthesize short strands of DNA and full genes lags considerably on the same scale, with costs per unit of DNA not yet approaching $0.10 in 2010. 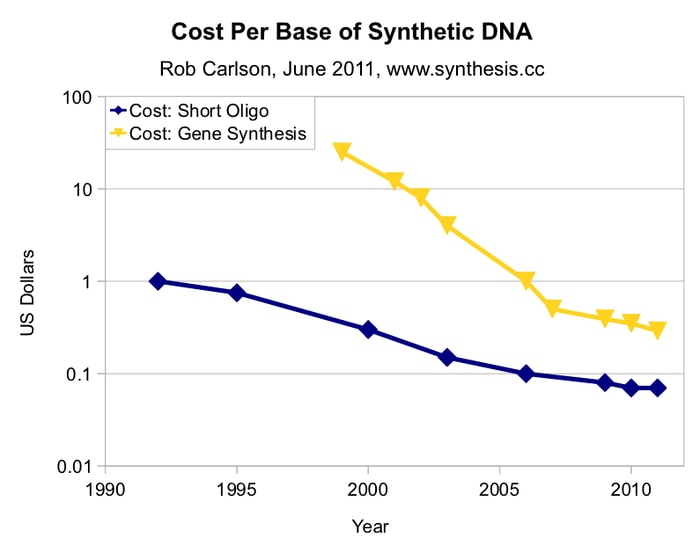 Cheaper sequencing costs will ultimately provide an added incentive to invest heavily in synthesis technologies. How far can costs drop? Well, when you think about it, the ultimate floor for writing DNA would be free -- nature constructs an incredible amount of the information molecule free of charge each and every day -- so we have a long way to go. Luckily, companies such as Integrated DNA Technologies, Gen9, Life Technologies, SGI-DNA, and Helix Nanotechnologies are ready for the challenge.

What's next?
DNA sequencing costs have dropped dramatically in the last decade, but reaching the psychological threshold of $1,000 per human genome will usher in a new era of genomic analysis possibilities that stretch beyond health care applications. Next-generation technologies from Illumina and Thermo Fisher Scientific promise to increase the world's sequencing capacity even further by the end of the decade while simultaneously expanding the market opportunity for cost-effective DNA synthesis technologies. So what lies ahead for the sequencing industry? I don't know for sure, but the $100 human genome has a nice ring to it.

The Motley Fool recommends Illumina and Thermo Fisher Scientific. We Fools may not all hold the same opinions, but we all believe that considering a diverse range of insights makes us better investors. The Motley Fool has a disclosure policy.