The Dow Jones Industrial Average (DJINDICES:^DJI) is up 0.68% today in last-minute trading as a report from the Federal Reserve and earnings releases give investors continued confidence in the stock market. The Fed's Beige Book said consumers are spending more, manufacturing is improving, and real estate is improving, which should all drive economic growth and hiring. None of this is particularly surprising, but investors sometimes need reinforcement from the Fed.

The other positive data point out today was the Mortgage Bankers Association announcement of a 12% jump in mortgage applications last week. Rates were down slightly and homebuyers jumped on the lower costs, although adjustments for the holidays may have skewed data.

Big banks lead the charge
JPMorgan Chase (NYSE:JPM) and Goldman Sachs (NYSE:GS) are leading the Dow today, climbing 3.1% and 1.5%, respectively. JPMorgan's $5.3 billion profit, or $1.40 per share, in the fourth quarter helped investors believe the megabank can move past a series of legal settlements with the government, while Goldman is up in anticipation of its earnings report tomorrow morning.

Former Dow component Bank of America (NYSE:BAC) is probably pulling all of the big banks higher after reporting a huge jump in net income, from $367 million a year ago to $3.18 billion in the fourth quarter.

There's no doubt that bank earnings are stabilizing, but there are some holes forming in the long-term growth story. First, mortgage rates are up over the past six months and that has resulted in a sharp drop in loan originations at all three banks. 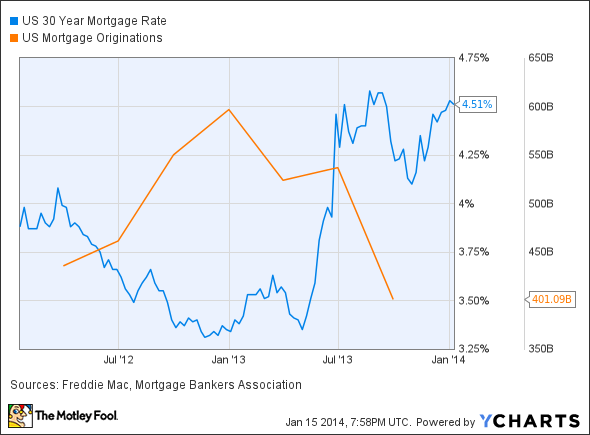 Then there's the government crackdown that's already hit JPMorgan and is likely coming for Goldman Sachs and Bank of America this year. The latter's litigation expense, including reserves, increased from $1.1 billion in the third quarter to $2.3 billion in the fourth quarter, a sign that BofA knows the feds are coming.

Finally, increased regulations on big banks will keep trading profits from growing in the future, and that's been the fuel behind Wall Street for more than a decade.

The big banks are making money again, no question about it, but the growth opportunities present for companies of that size under intense scrutiny are limited. I just don't see these as high growth stocks in the future.